An overview of five travels to Rio de Janeiro, made between December 2006 and October 2007.

Rio de Janeiro, RIO in short. Almost everyone knows the former Brazilian capital. Rio is associated with carnival, the famous beaches of Copacabana and Ipanema, but also with crime, relentless violence and countless murders. Rio, a city of extremes. A city that is very popular amongst tourists, but is being avoided too. In this respect you may compare the second city of Brazil to Amsterdam, in some respect. As a Dutch ‘provincial’ I have avoided the Dutch capital for a long time. Because I was told: `It’s dangerous, you should better not go there. Before you know ….` These statements are not unknown to many (Dutch) readers. But I went there. I even studied there. I was going out there; I made many walks throughout the tiny center. The narrow alleys, along the canals. I learned to know Amsterdam, learned to love this unique city with its rich history. 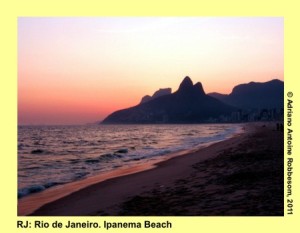 For me it was the same case with Rio. As a “gringo” I was strongly advised to avoid Rio, because, “It’s dangerous, you better cannot go there. Before you know …`. The same story. Coming from Minas (Mineiro) I would consider myself a Brazilian provincial, compared to those from the more mundane Rio and São Paulo. In December 2006 I finally went to Rio, accompanied by university students.

The first mission was for me a cautious exploration of Rio. I was cautious and kept constantly my eyes open. But I did not show that too much. I was getting to know better the districts of Copacabana and Ipanema. I watched the people on the street. How they were dressed, what kind of jewelry they wore, how they are carrying their belongings. Soon it occurred to me that the majority still wore jewelries: glittering bracelets, watches, necklaces. Items that may be potential targets for street robbers. If they can wear jewelry, such jewelry may not have much value, or it is fairly safe. The handbags were generally loosely in the hand, occasionally hung in front. I copied their attitudes, in order not to appear too obvious. 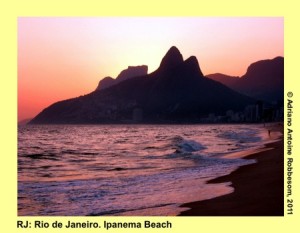 A week later I received another invitation for a trip to Rio: Rio Mission II. Now the relatively safe Copacabana was left behind, and Niterói was explored. I visited the tourist office in the center of Rio – which is well hidden on the ninth floor of a university building – and informed about the safety in the city. I was told that at day was it is fairly safe, because of the massive presence of the public. But in the evening and the night really is not advisable to be on the streets alone. I went to explore the historic center of Rio, tasted the past glory and wealth of the former capital of the country. Ancient houses, which show a style that strongly resembles to that I know in Europe, especially in Portugal. Narrow streets, many shops, restaurants, bars. A multitude of churches, with an abundance of shining gold within it. The walls and ceilings covered with gold leaf, blinding your eyes. On day two, we had a bus trip to Niteroi, to a secluded beach. A journey along the Port of Rio, over the long bridge that connects Niteroi with Rio, with a wonderful view over the city on the other side of the lagoon. On day three, we climbed the Morro da Urca. A fair and simple short climb. More than worth it, because the reward was a breathtaking view over a large part of the city. A splendid view of the center, of Botafogo and Flamengo. I got to know Rio better, I started to like Rio more.

In January 2007 I was back in Rio. I was invited to attend a biennial of the Brazilian Student Union (UNE). A biennial in Art, Culture and Science. A meeting with more than ten thousand students from all Brazilian states. From Roraima in the far north to Rio Grande do Sul in the far south. A program of music, dance, culminating with the act of the popular pop group Lenine. For me, this mission had a personal deception: my beloved digital camera broke, and could not be repaired. So I have no photographs from this mission, but I still keep a load of memories and anecdotes. During this third mission we walked a lot. Along the beaches of successively Leme, Copacabana, Arpoador, Ipanema, along the lake of Lagoa, and to return to Urca at night. One day later, a walk to the highest point of Rio: the rock of Corcovado, on which the Cristo Redentor is located. A thirty meters high statue of Christ, the defining image of Rio, without doubt. During this mission I have seen more of Rio, Rio has become less unknown to me; I started to love Rio more.

My fourth travel to Rio followed more than six months after the third. A short mission that lasted four days, the long weekend in mid October. Again it the hotel’s strategic location between Ipanema and Copacabana was our base. And again, the famous beaches of Copacabana and Ipanema were visited. They are not just beaches, but beaches that you cannot visit often enough. During this stay in Rio, I have visited the Corcovado and the modern World Wonder Cristo Redentor twice. Once by renting a van, once on foot. One day was reserved to visit Niteroi: Museum of Contemporary Art, designed by Oscar Niemeyer, and the Fortress of Santa Cruz. I become addicted to Rio…

Four missions Rio. I have seen a lot, I have experienced a lot; I have a lot of memories to keep. But Rio is more, has more. In total I have spent 22 days during 4 visits, and still I did not see too much of Rio. I need to return more, I shall return….