Teresina is the only capital located land inward of the northeastern region. Together with Timon, located in the state of Maranhão, Teresina forms a twin city, separated from each other by the Paranaíba River, with its metropolitan region exceeding one million inhabitants. Another river, called Poti River, flows through Teresina; therefore, the city is also called Mesopotamia of Brazil. Teresina is considered as one of the hottest locations in Brazil: the temperature may reach over forty degrees in summer. The city has the third best quality of life in the northeastern region, and is considered as Brazil’s third safest capital. However, Teresina’s Human Development Index is the second lowest in the northeastern region. 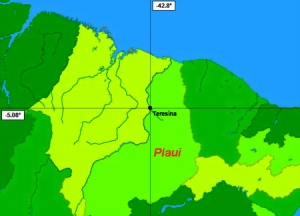 Teresina is the capital of the state of Piauí, and is located at 366 km from the Atlantic coast. Together with the city of Timon, located in the state of Maranhão, Teresina forms a twin city, which is separated from each other by the Parnaíba River. Teresina is a fast growing city (estimated population in 2014 (IBGE): 840 thousand inhabitants), one of the fastest growing cities in Brazil. The Teresina Metropolitan Region counts more than 1,2 million people. The urban area of 1392 sq km is the largest in the northeastern region. The average altitude of the urban area is 72 meters.

Already in the seventeenth century, a group of bandeirantes (pioneers) led by Domingos Jorge Velho, settled in the region of what is now Teresina, at Barra do Poti, and started a commercial factory (feitoria in Portuguese) and breeding cattle. Around 1760, Barra do Poti was inhabited by fishermen, canoeists, and cassava and tobacco planters. In 1797, the Nossa Senhora (Our Lady) do Amparo Church was erected, and in 1827 the freguesia de Nossa Senhora do Amparo. Barra do Poti was elevated to the status of a village on 6 July 1832, and was therefore renamed into Vila do Poti.. The original village became inundated by river floodings; therefore, the new village had to be constructed at a higher altitude, and was named Vila Nova de Poti, on 29 November 1842. The capitania (Brazilian administrative region of colonial Brazil) of Piauí planned the transfer of the state capital Oeiras northward. Initially, the idea was to construct the new capital at the Atlantic coast, but it was decided to have the new capital constructed along the margin of the Parnaíba River, because of its economic and strategic importance. Thus, Teresina became Brazil’s first planned capital.

When Conselheiro José Antônio Saraíva became President of the province of Piauí, he determined the location and started to have the inhabitants of Vila Nova do Poti moved to the new location, named Saraíva de Nova Vila Poti. In 1851, the construction of the Igreja Matriz de Nossa Senhora do Amparo was started, marking the construction of the new capital. On 21 July 1852, the capital of the state of Piauí was transferred from Oeiras to the new capital, which was baptized into Teresina, as a homage to the Brazilian empress Teresa Cristina Maria de Bourbon. On 16 August 1852, the city of Teresina was officially founded. The city is characterized by its geometrically oriented patterns. Already in 1860, the city had grown more than one kilometer in extension. In less than twenty years, the population had increased from 49 to more than twenty thousand. Public illumination was introduced in 1882. In 1939, the Ponte Metálica, connecting the cities of Timon and Teresina, was inaugurated.

Economic activity in Teresina accounts for approximately 45 percent of the entire GDP of the state of Piauí, equaling the value of 11 billion reais, ranking 49th among the Brazilian cities. Major industrial activity is the textile and confection industry, providing work for ten thousand people. Other factories produce bicycles, drinks, chemical and pharmaceutical products, furniture, and ceramics. Because of the rapid expansion of vertical constructions in the city, construction activities are booming. Bovine and equine products (54%), copper residues (39 %), and plastic products (6%) are the main export products. Only in 1967, the airport was inaugurated in Teresina.

It was local poet Coelho Neto who immortalized the green colors of Teresina in his works. At the various bridges colorful sunset may be witnessed. Teresina is also associated with hot temperatures (calor in Portuguese). It has become one of the characteristics of Teresina. Warm weather conditions, warm contacts between people, either friends or random people in the streets. The warm odors of numerous jasmines and of typical local dishes, such as galinha caipira (‘countryside chicken’), carne-do-sol (sun-dried meat).