Vitória is the third smallest Brazilian capital and one of the three Brazilian capitals that is located on an island. Despite its small population size, Vitoria is of economic importance, thanks to the presence of extensive port facilities, that transport iron ore from neighboring state Minas Gerais overseas. The recent discovery of significant oil fields in the territorial waters boosted the local economic activities. Vitória boasts to be called the fourth best Brazilian capital to live (United Nations,1998). 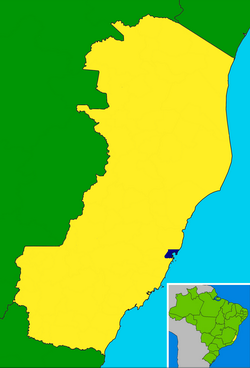 Vitória is the capital of the small Brazilian state of Espírito Santo. However, neighboring Vila Velha is the largest city of the state. The city of Vitória counts 34 islands (originally there were 50, but some islands have been merged with neighboring islands by reclamation), the city itself is located on the largest island, bearing the same name. Vitória is of strategic importance since three other state capitals (Belo Horizonte, Rio de Janeiro, and São Paulo) are within reach of about one hour or less by air. About 40 percent of the city area of 93 km2 is covered by rocks. The city area is an estuary formed by the rivers Santa Maria, Aribiri, Marinho, and Bubu. Vitoria counts about 317 thousand inhabitants (Census, 2010), while the metropolitan area of Greater Vitória counts about 1.6 million.

The coastal area of Espírito Santo was inhabited by various tribes of Tupi indians. More land inward, Botocudos tribes lived there. The latter tribes were hostile, belligerent, and practiced cannibalism. In 1535, the Portuguese Vasco Fernandes Coutinho founded the settlement of Vila de Espírito Santo, inside his capitânia of Espírito Santo. The village became under attack of the indigenous tribes, and the Dutch and the French, who were looking for suger cane and gold. As a result, the capital of Espírito Santo was moved to an island, five kilometers north. The indians called the island Guaananira (Island of Honey). Vila Nova de Espírito Santo was founded, on September 8, 1551. This new city was later renamed into Vitória, the Vila de Espírito Santo received  the new name Vila Velha (Old City). The name Vitória (Victory) refers to the victorious battle of a regiment led by Coutinho against the Goitacazes indians.

Until the end of the nineteenth century the city didn’t undergo many changes. It was considered as a somewhat backward town, with a disorganized infrastructure. On February 24, 1823, Vitória received the status of a city. Shortly after the proclamation of the Brazilian republic in 1889, modernization of the capital started. A port was constructed, and with the significant increased price of coffee, the economic activity in the region boosted. Only in 1927, a bridge linked insulated Vitória with the Brazilian mainland. At present, six bridges link Vitória with the mainland, the most important is the Terceiro Ponte (officially: Ponte Mr. Darcy Castelo de Mendonça) between Vitória and Vila Velha. The modernization of the harbor (Porto de Tubarão) gave another boost for the economic development of Vitória.

Vitória harbors three ports, forming the largest harbor complex in Brazil. Initially, in the early 1900’s, coffee was the main trade product. Together with Rio de Janeiro and Santos, the Port of Vitória shipped coffee overseas. More recently, iron ore, transported by railroad from Minas Gerais, is the main trade product. With the recent discovery of oil in the territorial waters made the state of Espírito Santo one of the largest oil producers in Brazil. Other significant economic activities are services and tourism. 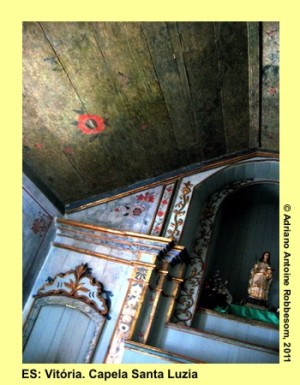 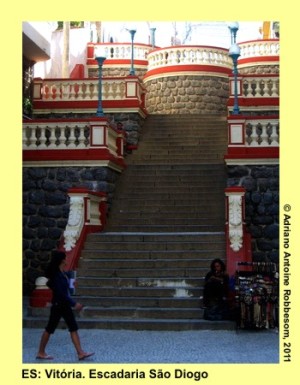 The city is divided in Cidade Alta (Upper City) and Cidade Baixa (Lower City). The lower city was frequently under attack, and therefore fortifications were constructed to withstand the attacks. Most of these fortifications ceased to exist. Originally. the lower city is connected with the upper city by stairs. Two stairs built in the eclectic style are worth visiting. Escadaria São Diogo was constructed next to the fortification São Diogo. The fortress already disappeared more than a century ago, the stairs were reconstructed in 1942, with respect to the colonial style. Escadaria Maria Ortiz bears the name of a young hero, who lived in the seventeenth century. The young girl motivated her neighbors to withstand attacks from a Dutch expedition, led by Piet Heyn, on March 10, 1625. The Dutch tried to attack directly the heart of Vitória and gain control of the city. Maria and her neighbors used everything to force the Dutch to withdraw, from boiling water to stones. More villagers followed this example, and the Dutch were forced to return to their ships. The Santa Luzia chapel is the oldest monument in Vitória, being constructed in the sixteenth century. Clearly visible is the Metropolitan Cathedral. Its construction began in 1920, replacing a smaller church in colonial style. The Carlos Gomes Theater is built in 1924, in the typical eclectic style, replacing the previous theater that was destroyed by fire. Another location with a Dutch history is the Caramuru viaduct. Here a battle occurred in 1640 against Dutch invaders. The viaduct itself was designed for a tram, but it was never used.

Vitória hosts some city beaches, with the most well-known Praia do Canto. This district hosts a large variety of restaurants and bars, the Praça dos Namorados (Lovers’ Square) is the location of a weekly fair of local handmade products and food. The recently reformed Camburi beach is located just north of the center of Vitória, one may find many people cycling and running. Behind Camburi Beach is the Parque Pedra da Cebola, a 10 hectare park with remnants of original Atlantic forest and the typical restinga forest. 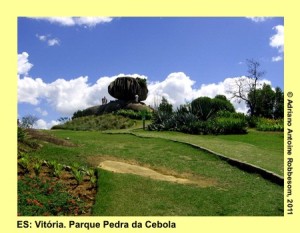 Just five km south of Vitória, the former capital Vila Velha may be visited. Vilha Velha hosts three major beaches: Praia da Costa, Praia Itapoã, and Praia Itaparica. Not to be missed is the convent Convento da Penha, contructed by Pedro Palácios in approximately 1558. The convent is located on the top of Morro da Penha, 154 meters high. The legend tells that Pedro was living in a cave at the foot of this hill, and that his image of Nossa Senhora da Penha (Our Lady of Peñafrancia) disappeared three times. And three times it was found back at the top of the hill. Pedro decided to construct the convent thereafter.

More southbound, with easy access by bus, one may encounter one of the most popular beach resorts of Espírito Santo: Guarapari. These beaches are not only popular for the people of Espíritio Santo itself, but also for the people of neighboring Minas Gerais, the state that lacks beaches. During most popular holidays, the beaches are populated by great numbers of mineiros, inhabitants from Minas Gerais.
Other popular beaches may be found north of Vitória. The small village of Jacaraípe and the larger Serra host a number of beautiful and less frequented beaches. 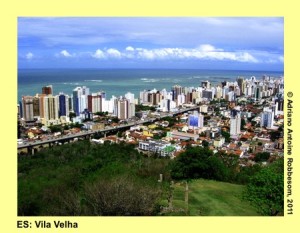