Experiences of a Dutchman living in Belo Horizonte, since December 2004, from month to month.
June 2005, part one. On the way to Foz do Iguaçu (PR): one day in Curitiba, and one day in Paraguayan border city Ciudad del Este.

June 2005 was a crucial month for me. A month full of adventure, with many changes, that continued in the subsequent months. This month was also the end of my stay with the family of Myra, I had spent six months in their house. I had the choice between leaving Brazil and extend my stay in the country. I had not finished my thesis; I needed more time for that. Some professors at the university had great interest in my knowledge and experience and wanted me to join their team. Prof. George, from Texas, even offered me a job as a microscopist. It was a very modest beginning, but really a beginning.

Wintry mist in São Paulo, early in the morning

It is not easy to obtain the necessary documents to stay, even in Brazil. My Dutch documents had to be translated into Portuguese by an official translator. I managed to find this translator; fortunately it was not too expensive to have my documents translated. I’m sure I would have spent a lot of time in the Netherlands for achieving the same result. My collection of documents gradually increased. I received my Brazilian Social Security number, my Brazilian bank account. Only then I was able to obtain a contract.

The mosque in the center of Curitiba

I was invited to visit Curitiba, and I stayed there one day. That autumn day was sunny and pleasant; I enjoyed the city tour that my friends organized for me. I visited a friend of these friends in a maternity clinic; it was the first time that I entered a Brazilian hospital. I entered a mosque for the first time; I then could not believe that I would set foot again in this Muslim prayer house, three years later. The tour was followed by a delicious churrasco (barbecue) in a restaurant. One of the friends was good friends with the owner; he guaranteed us good seats and excellent service. The waiters ran in and out with spikes of over one meter high with large chunks of roasted meat. They cut a piece of this delicious meat upon your request. My stay in Curitiba ended in one of the trendy bars in the center. 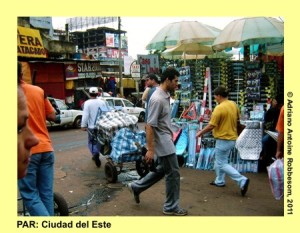 Disorder in the streets of Paraguayan
Ciudad del Este

In the evening I went by bus to the location where the three countries of Brazil, Argentina and Paraguay meet each other, in Foz do Iguaçu. The bus ride took ten hours; I arrived there in the morning. From the bus station I walked toward the border with Paraguay and crossed the bridge, along with hundreds of fellow pedestrians who seem to make this crossing daily. I had my passport stamped and I was admitted to enter Paraguay. The border city is called Ciudad del Este, the city of the east. This city has the reputation be the center of commerce. The enormous quantities of electronics, designer clothes and brand shoes are hard to imagine. The narrow streets were further narrowed by the numerous stalls with electronics. I was constantly accosted by the vendors to take a closer look at their merchandise.

Large shoppings with all facilities for befriended
and buying-eager Brazilians

I was looking for a hotel, where I would spend the night. It was not difficult to find a cheap hotel. I had the luck that the lobby staff spoke English, even though there level was not very high. Stammering and stumbling, and literally bowing, the poor devil explained me everything, and then guided me to my room. This room was not very big, but clean. I took a refreshing shower and went back to the city center, armed with my camera. I was not the only one who was armed, according to the many tough guys with a hard look, and with their gun in their hands or in a holster. My walk through the city did not only discover the city itself, but also various types of firearms. 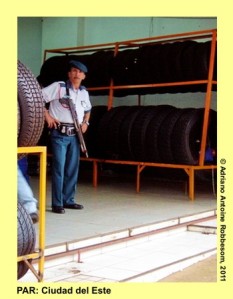 I was not in Paraguay for the electronics, but to see something of this neighboring country. Yet I could not resist browsing through the electronics shops, and I bought some accessories for my laptop. So I managed to get a mini mouse for only three euros, ten dollars for a camera, and a headset for four euros. It was lucky that I did not buy too much, since the Brazilian customs were checking the bus twice, when I was returning to Belo Horizonte. All luggage was carefully checked for the presence of illegal electronics. I was lucky that I carried the passport of my laptop with me, to prove that I already had my laptop with me when entering Paraguay. 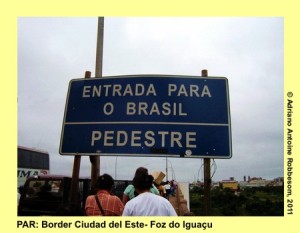