A Foreigner in Brazil (11)
SEP 2005: Ibitipoca Park, and a Professor Losing Wild Hairs

Experiences of a Dutchman living in Belo Horizonte, since December 2004, from month to month..
September 2005: Ibitipoca Park, in the south of Minas Gerais, and shaving off wild hairs of a professor, who was about to leave his students.

In September the tropical winter months and the long drought came to an end. The temperature was back to over twenty-five degrees, some rainclouds freed their blessed water onto the parched landscape. The month September is an ideal month for spending holidays in Brazil. Ideal for visiting the waterfalls of Foz do Iguaçu in the south, the vast Pantanal wetlands in the west, and the full freshwater lakes in the vast dunes of Lençóis in the northeast. Also for Belo Horizonte and its surrounding historical cities, September is the ideal month to make trips without fearing a long series of tropical downpours. For example, the historical cities of Ouro Preto and Congonhas may be visited under ideal conditions: lots of sun, and a nice temperature.

Mist in the morning….

In September 2005, I did not visit either of the abovementioned locations, but I was invited, by Rodrigo, Marina and Marina’s mother, to spend a weekend in a park in the south of Minas Gerais: Ibitipoca. This park is located close to the border with the neighboring state of Rio de Janeiro, and enjoys a more than local reputation. The rugged, mountainous scenery and the waterfalls invite you to have delightful walks along the marked trails. The park is also known for hosting more than one hundred different species of birds, their twittering sounds like natural background music during the hike. 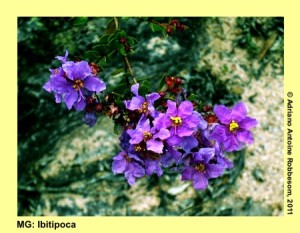 The Ibitipoca Park is located along the highway from Belo Horizonte to Rio de Janeiro. The road meanders through the mountainous landscapes, following the slopes of the mountains. The highway is of a reasonable quality, but you need to be aware of many freight trucks on the road. Even experienced bus drivers sometimes have great difficulty to keep their planned velocity, and sometimes are forced to stay behind a long column of trucks for a while. When there is an opportunity, the bus moves swiftly to the left, the bus driver gives a quick press on the horn to alert the truck driver. The truck driver responds with another honk when the bus has enough space to turn right again, past his truck. 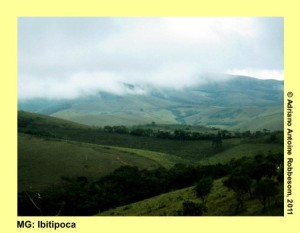 Marina is a very experienced driver. She had no trouble to drive past the trucks, even there was very little space. Near Juiz de Fora – close to the border with Rio de Janeiro – she had to leave the highway, heading towards Conceição de Ibitipoca. The comfortable highway was now changed for a badly maintained local road, full of bumps and holes. Marina sometimes had to maneuver to the left lane or to the right shoulder, in order to avoid to get stuck in deep holes. At other times she was forced to drive slowly in the shallow but treacherous pits. The distance of roughly twenty kilometers took about one hour. 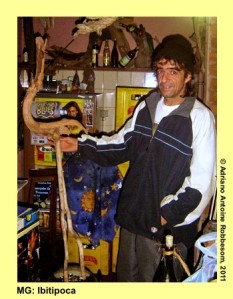 Marina’s mother had made a reservation for us at a pousada to spend a night there. Marina shared a room with her mother, while Rodrigo and I shared a bunk. It was already early in the evening, when we arrived; there was ample time left to explore the tiny village. Marina and I entered a local bar, where the bartender proved to be a skilled artist too. This bartender was very talkative; unfortunately my level of Portuguese was not sufficient enough to understand and to enjoy his lifetime stories.

Introduction of the Chinese-Indonesian-Dutch
cuisine in Belo Horizonte

The next morning, we climbed into a Volkswagen van that drove us to the entrance of the park. Each day, only a limited number of visitors are allowed to enter the park. We were about to visit at least the waterfalls, and to enjoy the magnificent scenery. I carried my two cameras with me, and made a lot of pictures. One of the best photos of that day was a picture showing two birds resting on bare branches. The hilly landscape was intensely withered due to the months of winter drought, yearning for the first rain drops of a new rain season, which was about to start. However, we spotted some brightly colored flowers in the dry grassland. We took our time; we walked all morning and early afternoon. We planned to continue our walks the next day, to other viewpoints and interesting locations.

Juice beef and crispy onions at a churrasco

A group of cyclists who had departed from Barbacena arrived in the afternoon. Flávio, a colleague of Marina and Rodrigo, was among the cyclists. They had to suffer greatly during the climbs of the mountains on the track between Barbacena and Ibitipoca. Later at night, some rain showers arrived, and the night felt very cold. We had to use all blankets available. The next morning started with drizzle, and there was mist around. It was too dangerous to visit the park under these circumstances. We restricted ourselves to little walks within the village, and we followed some unpaved roads. On the way back home, Marina followed a dirt road, which proved to be much faster than the asphalt road full of bums and potholes.

On a warm September evening, a churrasco (barbecue) was organized for a professor, who was about to leave his work group for a while. Such a party is called a Festa da Despedida. His students considered his leave as ”treason” and plotted a suitable revenge. At the time that a number of participants of this party were pretty drunk, one student took the initiative. He was convinced that the mustache and beard of the professor could not join him to warmer Bahia. He took the clippers that are normally used to shave rats. He had cleaned the apparatus carefully, ready to use removing facial hair of the poor professor. The drunken professor protested weakly, and did not resist too much when the student started to cut his beard. Soon the facial hair fell on the concrete floor. Another student had another opinion of taking revenge and started to shave the head of the professor, much to hilarity of the bystanders and to horror of his wife. There was no other option to shave the head completely. I was lucky to have my camera with me, and I recorded every moment of this memorable event which undoubtedly had no precedent at the faculty. In retrospect, both the professor and his wife could laugh about that peculiar night.

In September, I experienced my first spring in Brazil. I had to deal with a small move later that month. I left my workspace that I had acquired in January, as more students arrived there. I ended up in a small room that also served as a storage room. There were two large desks and a large freezer, for laboratory material. I was allowed to use one of these desks, and I have spent more than six months there, sitting behind my laptop, and working with my thesis. There was also space to park my two large suitcases. This room was very secure for me, since only the befriended professor and I obtained the key. Only at the end of the year, the suitcases were transported to the apartment. Since then they were moved quite often… 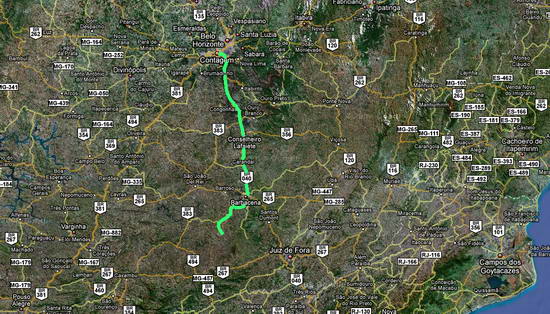