Travel in Brazil: FLORIANÓPOLIS (03). To the Federal University (UFSC)

On the Way to the Federal University: UFSC

It was almost four o’clock when we approached Florianópolis. It took almost one full day to travel from Belo Horizonte. A travel from the state of Minas Gerais, through the states of Paraná and São Paulo, and then entering in Santa Catarina. A distance of over 1300 kilometers. And finally we saw a thin azure blue line on the horizon: the Atlantic Ocean! We were excited, like a flock of folly goats. We mineiros are used to see mountains around us, anywhere. The nearest beach of interest is more than four hundred kilometers away: the beaches of Rio de Janeiro. In Rio de Janeiro, the temperature of the ocean water is still pleasant, slightly warmer than I was used to in The Netherlands, when there was a summer heat wave of at least 5 consecutive days. And that is very uncommon there, even in summer. But back in Brazil. When you follow the coastline southward, you will experience that the ocean water will become significantly colder. When we arrived in Florianópolis, the summer already had ended two months earlier, and the water has cooled down somewhat. We therefore could not dive in the water, but had to restrict ourselves to wet our feet and legs. 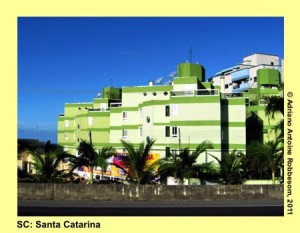 Almost everyone was looking to the left, when the bus was following the highway parallel to the coastline. We followed the thin blue line of the Atlantic Ocean, regularly withdrawn from view by the houses and hotels that are constructed along the coast. There were no miserable houses, no dilapidated hotels. On the contrary: modern apartment buildings, painted in bright hues. Large hotels with large swimming pools within their boundaries. Initially, it was surprising for me to observe many swimming pools along the coast. But with time I imagined that many Brazilians do not quite master the art of swimming. Such a pool is much safer than the sometimes treacherous currents. Moreover, Brazilians love to spend time near the swimming pools. Being lazy in deck chairs, drinking some ice-cold beers, and munching juicy, crunchy roasted meat of the churrasco, the Brazilian barbecue. It was a little more than one year ago, on New Year’s Day, that I celebrated my birthday on the beach in Vila Velha, in the state of Espírito Santo, enjoying ice-cold beer and barbecue meat all day long.

I’m sure that some of us were already dreaming of this beach scene. Probably, they already had made the preparations of their beach-beer-churrasco parties. A couple of days later, it turned out that these plans had been successfully implemented in practice. We grew excited as we neared Floripa. None of us had ever visited this city. For all of us it would be a real discovery, in a different Brazil.
One could consider the state of Santa Catarina – and neighboring state Rio Grande do Sul – a different Brazil, since both states boast to have a standard of living comparable to certain countries of the European Union. It is often joked that Brazil is a state with three types of B-nations (Belgium, Bulgaria, Burundi) within its borders. Floripa could be compared with Belgium, and Belo Horizonte with Bulgaria. The very poor areas in the northeast may just reach the level of Burundi, a poor African country. In this respect, I have deep respect for the Brazilian president to govern such an immense country with such astronomical contradictions within its borders. 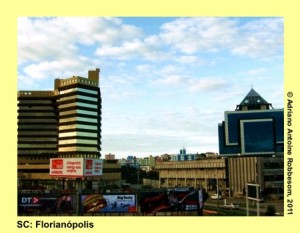 It probably will surprise many readers that we were leaving themainland of Brazil for a few days. Florianópolis, the formal name of Floripa, is not entirely located on the mainland, but its center is located on an island. We had to cross the bridge connecting the island, named Santa Catarina, with the mainland. In front of that bridge is a post of vigilant officers of the Policia Rodoviária, to watch closely every vehicle that is about to cross the bridge. Bus driver Ricardo had to stop at the police station. He was told to pay 80 reais, to be allowed to cross the bridge and park the bus on the island. He also had to notify the officer when he was planning to leave the island. This control appears to be very efficient. It also reduces the probability that poor migrants invade the island. The island seems to be destined for Brazilians from the middle and upper class, and for tourists. 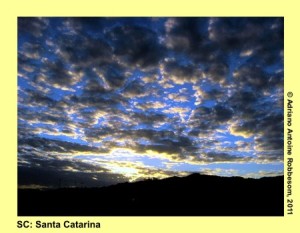 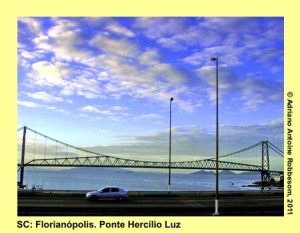 The bus rode over the bridge, and went through a tunnel. We saw another bridge that was quite similar to the famous Golden Gate Bridge in São Francisco. But much smaller. Later we would discover that the bridge still has a wooden decking. Hence, motorized traffic is not allowed to use that bridge. Ricardo guided the bus gently along the broad avenues in the direction of the university. The avenues appeared if they were directly flown in from the United States: very wide, well maintained, and with broad green strips. At that time, there was not much traffic, we made quick progress. We got some sightseeing of the city. We observed modern buildings with a sometimes daring architecture. It was clear that we had to deal with a relatively rich city. My eye suddenly fell on a small copy of the Statue of Liberty, which was located at the entrance of a large shopping mall. 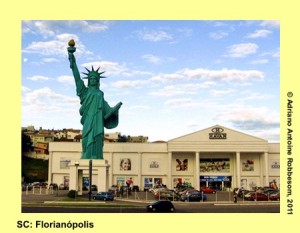 The city was left behind us; the bus followed the route to the UFSC: Universidade Federal da Santa Catarina, the federal university. Our destination for today. Ricardo entered into the campus, but the bus had to return after a few hundred meters, and after being informed that this was not the proper entrance. Ricardo had to discover the alternative entrance with the help of Jader, who got out of the bus to ask passers-by. Twenty minutes later the correct entrance was found, we drove a few hundred meters into the campus. We were about to stop near the reitoria and pick up our luggage there. I quickly dropped my luggage in a lecture room. I was called by Vítor to join him to buy a so-called colchonete, a thin mattress. I did not have one, and Vítor already had planned to buy one in Floripa. We left the campus and walked along the stores in the nearby street. Everything was closed already or about to close. The locals advised us to continue our walk to the shopping mall. There, in Shopping Iguatemi, was a hypermarket. We found our mattresses there, and were for sale for 12 reais only. About 5 euros. We managed to fold out our mattresses inside the crowded lecture room. There were about thirty mattresses spread on the floor. This was our dormitory for a few nights, a mixed dormitory…

An exclusive view at the provisional dormitory.
The towels and blackboard behind.
My mattress is located below left,
under the borrowed blankets from the bus.

3 comments on “Travel in Brazil: FLORIANÓPOLIS (03). To the Federal University (UFSC)”