On the Way to Downtown Florianópolis

Destination Florianópolis, capital of the state of Santa Catarina.
First visit to the compact center of Florianópolis 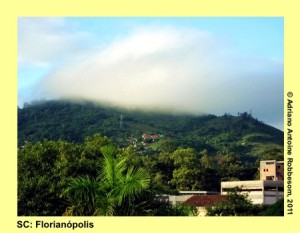 The welcome party, which was organized by our hosts of the university, was fairly attended. There was a small nightclub with alternating improvised music in the styles of pop, rock, MPB (Brazilian Popular Music), and funk. Cans of beer were available for 2 reais. The students danced, chatted, laughed, hugged, and kissed. A very normal Brazilian student party. At 2 AM, this welcome party was almost over, when the majority of the students, feeling exhausted due to the long bus ride, were lumbering, stumbling, lingering; they all left the dance floor, and headed for the dorms. I followed them, and at 3 AM, I was able to try out my brand new mattress. Despite the thinness, it was surprisingly comfortable. After having spent one night in the bus, sleeping in a seated position, I was less picky. I was just happy to lie down, finally. When I lied down, everything and everyone was very quiet, until..

A design that is quite similar to a Dutch
folkloric design.

… At 5 AM, the door of our dorm swung open with a loud BANG. The lights were switched on, immediately the dorm was  brightly lit. A group of ten, fifteen students entered the room. They walked around, they danced around, they sang, they shouted, they beat their improvised percussion instruments. “Oh, meu Deus!” This was not just my first thought. If in a moment of thought transference the majority of us thought the same. “Please let us alone, go away!” “Let us sleep at last Well, p*ss off!”. The invaders could not read these united minds, or were deaf. They went on, screaming very loud, and sometimes very close to the ears, that it was impossible to stay asleep. Back to the harsh reality of the night. This nightly ritual is called “arrastão”, a tradition among students, to disturb their sleeping fellow students. Arrastão has a negative tone, its meaning is assault, and often accompanied by violence. But now it was innocent. What you can call innocent. This disorderly bunch of noisy students stayed in our room for more than five minutes. And everyone was sitting upright, on the mattress, waiting impatiently until they finally left. All but one… Because the crazy Dutch, he continued to lie down, because he had prepared himself for this noise. He was smart enough to put orange ear plugs in his ears. I could hear the noise, but not that loud. I was able to fake being asleep, and could remain calm and relatively relaxed…

View from a bus stop

In the previous evening, Vitór and I were planning to travel around, even on Sunday. We did not want to sleep until late, what we consider as a waste of time. As a result, we left our mattresses at half last seven. Exactly at that time – sometimes I prefer to keep my European traditions – I shook Vítor awake. And I had to shake him again. For my own safety, I previously informed him whether he would accept it that I would wake him up anyway. I was already thinking of pouring a glass of cold water in his face, when he opened his eyes. Lucky Vítor. We left the room – with everyone still sound asleep – about fifteen minutes later. Only a few students from other rooms (and thus states) were awake. It felt somewhat chilly outside. But that was no surprise: in Southern Brazil, and at the end of April, autumn. The sun already was shining; a few low clouds covered the hilltops. We left the campus and followed the same route as the night before. In the direction of Shopping Iguatemi. We appeared to be crazy, but we left shopping craziness to others. The shopping mall was still closed, and we were heading for the bus station. Vítor asked a passer-by about the route to the bus station, and his friendly man joined us for a while, and had an animated conversation with Vítor. I was attentively listening to them.

We already had decided to take the bus to go downtown. There, we could find something for breakfast. The bus station was at about one kilometer from the shopping, we had to cross a wide road to reach there. The modern-looking bus station had a single entrance, which was blocked with two double turnstiles. We could only enter after paying the bus fare. A closed system. I already had experienced this system in Foz do Iguaçu (PR) and in Vitória (ES). The advantage is that you only have to pay once, even when you have to take more connecting bus services. Despite the early hour on Sunday, we did not have to wait long for the bus. Within ten minutes the bus arrived and we entered at the back door of the bus. Usually you enter at the front door of the bus, and you pay there. I already had spotted the bus schedules, and I was amazed to notice that the first bus service already starts at 6 AM, even on Sunday! Also in Belo Horizonte, there are buses at that early hour. What a substantial difference to the situation in the Netherlands. When you have the bad luck to live in a small village there, you may be very happy to see the first bus service on Sunday at 10 AM! Much too late to catch an early connecting train service. Just before 9 AM, we were on our way for our first destination of that day: downtown Florianópolis…

A small shopping mall. One of the brand names
attached on the wall is Dutch C&A.

2 comments on “Travel in Brazil: FLORIANÓPOLIS (05). Heading for Downtown”