(Click here for the complete overview of ‘Historical Minas Gerais’)

Congonhas is a small historical city at 75 km south of Belo Horizonte, along the ‘Estrada Real’ to Rio de Janeiro. The city is well known for the statues of Brazilian artist Aleijadinho.
1. An overview

The prophets (with clickable links):

Halfway through the eighteenth century, a small settlement was founded along the riverside of the Maranhão River. Miners and gold diggers arrived there, in search of their fortune. The exact history of the town is still under discussion. The town called Congonhas now counts about 45 thousand inhabitants.

The Santuário with in front the 12 statues of
prophets

The construction of this church began in 1757. The construction is attributed to the Portuguese Feliciano Mendes, who was a prospector in his active life, searching for gold. As a result of his work, he became quite ill, but he healed miraculously. Feliciano was a deeply religious man and kept his promise. He built the chapel with his own hands. Unfortunately, the death came still unexpected for him (in 1765), while the church was not completed yet. It was then decided to finish the construction of the church, and the most important artists of that era were invited to participate. These artists included Francisco Xavier Carneiro, Ataydes Manoel Da Costa, and Antônio Francisco Lisboa, we now better know for his nickname Aleijadinho.

Some of the chapels, with the city behind

Aleijadinho was responsible for the soap stone sculptures of twelve prophets that are situated in front of the church. In front of the church, along the path towards the center of Congonhas, are six small chapels, each of them containing a scene of the Passion of Jesus Christ. Each scene consists of several statues sculpted by Aleijadinho himself, or by his students under his supervision. Thanks to the work of Aleijadinho, the basilica in the baroque style is now accepted in the World Heritage list of the UNESCO.

The chapels with the church behind.

Congonhas may be easily reached by bus from Belo Horizonte. A single ticket costs about 20 reais (8 euros, 2010). The city is situated at the Estrada Real, a historic route that leads from Minas Gerais (Diamantina and Ouro Preto) to Rio de Janeiro (Paraty or Rio de Janeiro). Near the bus stop is the tourist information center, where you can see a little overview of the church and the statues, and were you can make an appointment for a local guide who leads you through the historic center of the city. The church is easily reached by bus. It is also possible to walk this distance; it will take a bit less than an hour. Remember that the church resides on a hill, and therefore must be climbed. At the foot of the church is a regular market, worth a visit too. 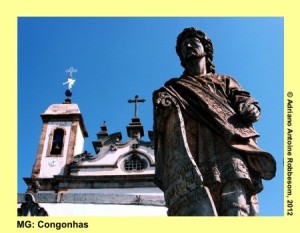 One of the prophets with the sanctuary behind

The sanctuary with another prophet in front

One comment on “Historical Minas Gerais: CONGONHAS. (01) An Overview”