(Click here for the complete overview of ‘A Foreigner in Brazil 2006’)
.

Experiences of a Dutchman living in Belo Horizonte, since December 2004, from month to month.
January 2006: Vilha Velha (ES), and returning to Belo Horizonte, via a short visit to Itabira (MG).

The year 2006 started as it ended in 2005: on Camburi Beach in Vitória, the capital of the state of Espírito Santo. In the previous episode I had already explained in detail how I met Diana via Claudia, and Claudia via Diana, to make a long story short. I was spending New Year with the latter two: Claudia, her mother and her daughter; Diana, her boyfriend, and her sister. And with thousands of people – all dressed in white – on this extensive beach. We arrived just in time, about ten minutes before the countdown. The countdown had started, and the people started to cheer on the beach. Welcome 2006! You should have experienced this sensation by yourself, to be able to describe it in more detail. It gives you a sense of unity, you feel united with the people around you, at such an important moment in the year. We wished each other a ‘happy New Year, we kissed and hugged each other, and then my friends spontaneously started to sing ‘parabens pra Você’, the Brazilian version of ‘happy birthday’. Some bystanders looked up, but continued with their friends to celebrate the very first moments of the new year, and to uncork the bottles. 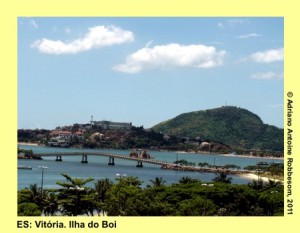 View from Diana’s apartment in Vitória

Our bottle was uncorked; the little plastic cups became filled with the sparkling champagne. Our welcome drink to the new year. We went closer to the sea; we threw our roses in the water. A tradition that occurs at many locations in Brazil. An offering of roses to Iemanjá, the Goddess of the Ocean. It is a candomblé goddess, equivalent to Our Lady of the Glory. Some centuries ago, when the slaves were forbidden to practice their own religions, they invented a practical solution, in order not to arouse suspicion by their masters. Most candomblé gods – Iemanjá is the mother of most of these gods – were assigned names of major Catholic saints. 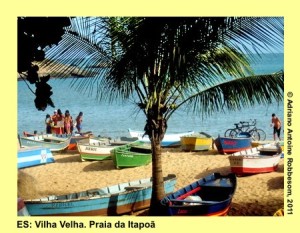 During the first day of the year, my 38th anniversary was celebrated on the beach. This time, we visited Praia da Costa at Vila Velha. My friends offered me a real beach barbecue, provided by Sidney, Diana’s boyfriend. Sun, sea, beach, barbecue, cold beer, and cooled wine: ingredients for an unforgettable birthday with Claudia, my friends, and Diana’s family. One day later, Claudia and I would return to Vila Velha, to visit one of her aunts. This aunt was trying to estimate my age, and to my great surprise and great amusement of Claudia, she was convinced that I was only eighteen years old. She was not the only one that year; there was another Brazilian who managed to estimate my age twenty years younger than my real age. In that year, my age was often estimated between twenty-five and thirty years.

The fazenda of Carlos Drummond de Andrade in
Itabira

We stayed a few days at Diana’s apartment. We visited several beaches, the night market in Vila Velha, as well as a small market at the square in front of Diana’s apartment. Those were interesting markets, I became more familiar with local art and handicraft, what is called Artesanato in Brazilian Portuguese. The hour of parting was near, we picked up Claudia’s daughter, mother and grandmother at the aunt’s house, and we all traveled back to Minas Gerais, by train. Generally, the train from Vitória to Belo Horizonte takes thirteen hours. It is a slow but a far from boring train journey. The trail follows the course of the Rio Doce, a river that runs from Minas Gerais through Espírito Santo. Now it had rained a lot in the previous months, the level of his river has increased greatly, and offered breathtaking natural scenes. We were not about to travel directly to Belo Horizonte, but we stayed in Itabira for one day, as guests of Claudia’s grandmother. There I met Claudia’s brother, who is a great admirer and connoisseur of Brazilian poet Carlos Drummond de Andrade. He drove us to the fazenda (estate farm) of the poet, where everything is still preserved at the time of the teenage years of the poet. For example the stairs that still bear blood traces from beaten slaves. Claudia’s brother was visibly pleased with my interest in this cultural trip, he told me a lot about Carlos and his time in great detail.

The stairs with blood traces of beaten slaves,
in the fazenda of Carlos Drummond’s family.

Itabira is a small mining town at about one hundred kilometers from Belo Horizonte. Two days earlier, Sidney also traveled to Itabira. He drove us close to the ore mines, where we could witness massive vehicles. From mega bulldozers to mega dump trucks. Everything had giant sizes, in order to extract and to transport the ore as much and as quickly as possible. A considerable amount of ore is destined to China. The next day we took the bus back to Belo Horizonte, our short holidays came to an end. 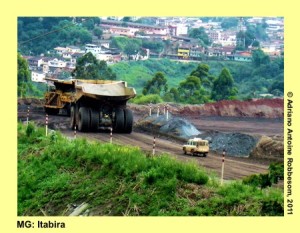 Giant vehicles at the ore mines in Itabira

Claudia and I were seeing each other regularly in the weekends. We went out together. On a Saturday, I invited her to join me to celebrate Julia’s birthday. I had met Julia one year earlier, through a pathway full of coincidences. The party was a typical birthday party, which you often may encounter in Minas Gerais and far beyond. In general, the guests do not only have a birthday gift, but they also bring some snacks or drinks for the party itself. At such a birthday party, a barbecue is organized, with roasted meat, which is cut in bite-sized chunks, ready to eat. During a barbecue party was held, with the grilled meat into bite-sized chunks are distributed. Beer, in large bottles, is poured in small glasses. In this way, the beer is kept cold, since you drink it quickly. Such a celebration also includes music. No DJ or a music collection of CDs, but genuine guitar music with accompanying vocals by those who are present. At Julia’s party, it included Julia, Julia’s boyfriend, her brother and father. It’s amazing how many music lyrics Brazilians know by heart, and sing with great enthusiasm. I have not met many Dutch singing complete lyrics flawlessly, by heart… 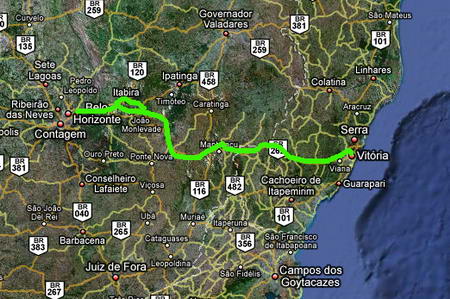 Travels made in january 2006