(Click here for the complete overview of ‘Historical Minas Gerais’)

Congonhas is a small historical city at 75 km south of Belo Horizonte, along the ‘Estrada Real’ to Rio de Janeiro. The city is well known for the statues of Brazilian artist Aleijadinho.
The prophets by Aleijadinho: prophet  Daniel.

Daniel (‘God is my judge’) was a Jew who was transferred in exile to Babylonia. His wisdom provided Daniel superior administrative positions. However, thanks to jealous officials, Daniel was thrown in a lion’s den, from which he was rescued by an angel.

The prophets (with clickable links),from left to right (names in Portuguese): 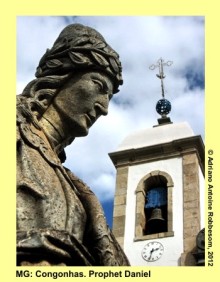 Statues of twelve prophets carved from soap stone are located in frond of Santuário do Bom Jesus Matosinhos. Aleijadinho had sculpted them between 1795 and 1805.

Daniel (“God is my judge”) is considered as a prophet by the Christians: a Bible Book is named after him. However, according to the Jews, Daniel is not a prophet. Daniel was a Jew, who was transported in exile to Babylonia, by king   Nebukadnezar II. He was imprisoned, together with three friends, and he wanted to continue with his Jewish principles. He refused to accept food that was devoted to idols; he only ate vegetables and drank water.

The wisdom of Daniel and his friends did not remain unnoticed by the Assyrian king and his magicians. Also his acquired ability to interpret dreams, gained admirers at the court. From the Persian conqueror of Babylonia, Darius the Great, Daniel obtained the important official functions: governor of Babylonia and even head of the governors. His fellow officials became very jealous and their conspiracy made Daniel be thrown in the lion’s den. There he was rescued by an angel, sent by God.

With time, Daniel had more visions: among them are the prediction of the end of the Jewish exile, the arrival of Jesus, His crucifixion, and the End of Times. 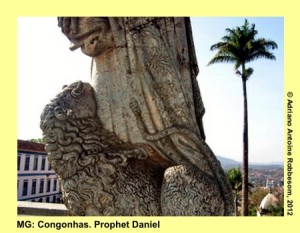 Where is his tomb?

Almost nothing is known about Daniel’s life after the rescue from the Lion’s den, and about his death. It is known that he was a prophet at advanced age, and that he had become more than 100 years old, according do certain calculations. It still remains the question where his tomb is located. At least six locations claim to have his remains: Babylon, Kirkuk, and Muqdadiyah in Iraq, Susa and Malamir in Iran, and Samarkand in Uzbekistan.

On the shield that Daniel is holding, one can read the following motto:

((On the authority of the king) I was thrown in the lion’s den; I was saved with God’s help) 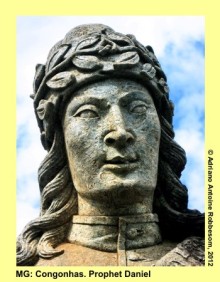 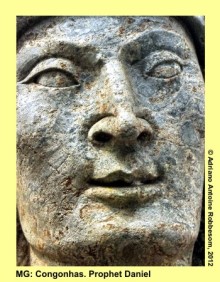 Like Abdias and Baruc, Daniel is depicted without a beard. But he differs significantly from these two prophets, concerning his hair, eyes, mouth, and the big nose with the nostrils wide open. His face has an aristocratic expression as of a high official.  Daniel wears a miter on his head, surrounded with a laurel wreath, symbolizing his victory against the lions. Daniel wears a long tunic, with a belt that is knotted to the collar. A lion, depicted as a pet, sits at one of his feet. This sculpture consists of one piece of soap stone. Undoubtedly, this statue has been completely sculpted by master Aleijadinho, and is considered as one of the masterpieces of the twelve statues. 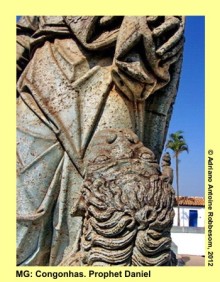 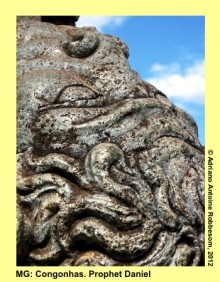