(Click here for the complete overview of ‘A Foreigner in Brazil 2006’)
.

A participant of the quadrilha dance
contest, with an anxious appearance.

July 2006 was about to become a decisive month for my stay in Brazil. In Belo Horizonte, july is a relatively chilly winter month. But the cold was compensated by the warmth of many festivals and parties in the city and beyond. One colleague, Washington, invited me to join him to a contest of folkloric dance. This dance, the quadrilha dance, is tightly linked to the Festas Juninas, literally June parties. Parties to celebrate the feast day of St John, São João in Portuguese. A large group of dance couples wore colorful dresses and worn suits. The dance is a demonstration of a traditional story: two lovers that will find each other, despite a great number of barriers and difficulties. The lovers, the father of the girl, a police officer, a pastor and a widow take part of the story, together with a large number of extras. The girl becomes pregnant, and of course her father is not happy at all with the news. He insists that the girl should marry her boyfriend. The boy is not thinking of marriage at all, and tries to avoid that. But the gun of the father makes him change his mind. The couple is married by the pastor. Everything has a happy end, with everyone happy, and everyone dancing. Even the pastor with the widow as his partner. For me it was interesting to observe the different dance groups, who were cheered enthusiastically by large groups of supporters. The next day, I was invited for a festa junina, at a sítio, a country house. At this party you could listen to the traditional music (with French roots), taste the delicious caldos (cream soups), and a big camp fire. That camp fire literally provided us warmth during the chilly night. The alcohol also helped a bit to give us a warm feeling. 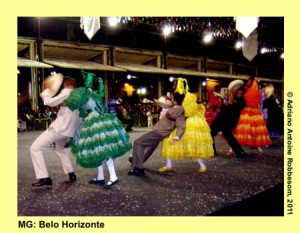 Fainting gentlemen are caught by the strong ladies

A carousel element of the quadrilha dance

The lover on his knees… 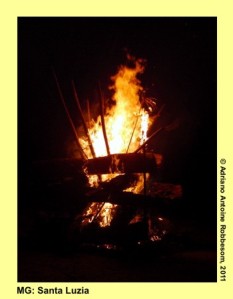 A big camp fire to keep us warm