Experiences of a Dutchman living in Belo Horizonte, since December 2004, from month to month.
July 2006, part six: Capoeira and Candomblé performances in Salvador de Bahia.

The Candomblé gods and goddesses

At day, we spent our time by visiting the beaches and the historic center of Salvador. At night, there was a varied program, organized by the hosts: the department of Library Science of the UFBA. For the first night, we were invited to witness performances of capoeira and candomblé at the university campus. Capoeira is also known in The Netherlands; sometimes there are performances during certain festivals. But the quality of these performances is much less,  compared to the performances in the berth of capoeira: Bahia. Originally a defense art, invented by slaves in order to avoid the ban of the use of weapons, is very popular in Brazil. We witnessed dancers who made apparently impossible acrobatic movements. Candomblé is a religious movement, also introduced by slaves. They suffered a ban upon worshiping the gods from their continent. As an alternative, they linked the African gods to catholic saints. From Holy Mary to Saint Anthony. The mother of these gods is Iemanjá, goddess of the Oceans. The performance showed the story of the gods, every god was introduced. It was very interesting to witness this presentation, that took more than one hour. Not only for me, the gringo, but for most of my Brazilian travel companions, who also witnessed such a candomblé performance for the first time.

The arrival of Oxalá, father of the gods 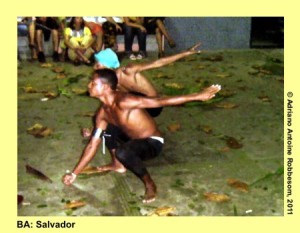 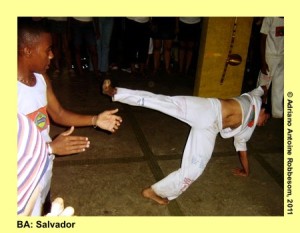 This dancer FLOATS above the floor. 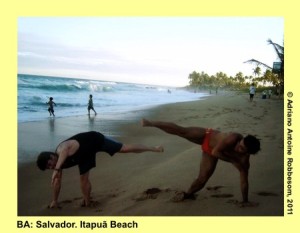 Not easy at all, capoeira…