The nights in Salvador were not restricted to candomblé and capoeira only. These nights were not limited by the gates of the university campus. In winter, there is a lot to do and to enjoy in the center of Salvador. One of the most famous music attractions is percussion group Olodum, who regularly have their performances in the center. You need to pay a small fee to see them playing. Six months after this Salvador travel, I was able to enjoy their music at a festival in Rio de Janeiro, for free. Also women have their percussion group: Didá, who also have wonderful performances with their drums. During their parade through the narrow streets in Pelourinho, they were followed by an enthusiastic crowd. At Wednesday night, we went to another, free, festival: Quarta da Paz (Wednesday of Peace).  This night was started with folkloric afoxé music by Filhos de Gandhy. The (all male) members of the group wear blue and white robes, including a turban They gained national fame thanks to the Brazilian music legend and former minister of culture Gilberto Gil. The next band was Banda Mahatma. They played many covers of international reggae bands, including UB40. The final act that night was Brazilian singer Belchior. He played some of his widely known songs, including “Apenas um Rapaz Latino-Americano” and “A Palo Seco”. The enthusiastic crowd sang loudly with him. When he finished his performance, Belchior was awarded a prize .

Regularly, there are live performances in
downtown Salvador. 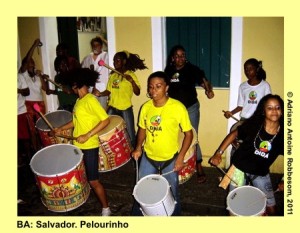 Two members of Filhos do Gandhy 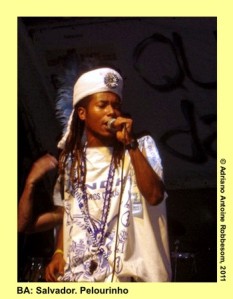 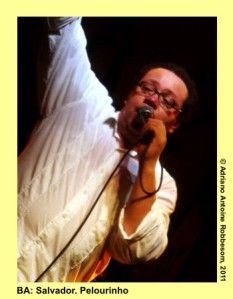