Experiences of a Dutchman living in Belo Horizonte, since December 2004, from month to month.
July 2006, eighth and final part: Various beauties of Salvador de Bahia.

I liked my stay in Salvador, now the third largest city of Brazil, very much. Not only because of its historical value, or because of the direct presence of beautiful beaches, but also because of the unique atmosphere that I have met there. An atmosphere that is difficult to describe, you have to experience it by yourself. Perhaps this is due to the origin of the diverse cultures in this city and its surroundings, which are fused and transformed into the typical Bahian culture. A culture with roots that refer to France, to Portugal, to West Africa, to Brazil itself. According to many Brazilians, Bahians are known for their easy way of life, their apparent unconcern, their apparent laziness, but above all for their alegria. You may consider alegria as a kind of happiness, a mood of intense feeling when life is very enjoyable. A mood that makes you not to think too much about the past, and not to hope too much for the future. Because the future may bring misery too. But consider the present as a present: live the day, enjoy the night. One very wise lesson from the Bahians that we all should implement in our lives. The trip to Salvador was my first in a series of travels, with students as my travel companions, to various Brazilian capitals – from São Luís in the state of Maranhão to Florianópolis in the state of Santa Catarina. For me, these travels were unique opportunities to travel in a cheaper way to the cities, to travel in a Brazilian way to know the cities much better, and to travel with the students and taste the local culture and nature. In this way, I already have encountered a respectable number of beauties and riches of Brazil, more than most (Brazilian and foreign) tourists ever will. 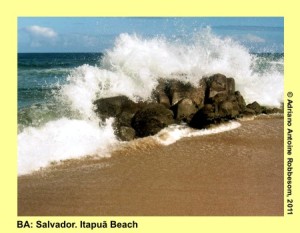 Colorful ribbons, as a memory of Salvador,
are processed as a handbag. 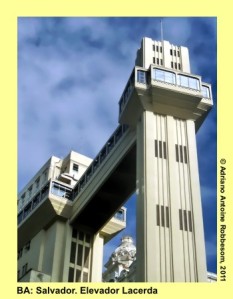 The elevator that provides entrance
to Pelourinho: the Lacerda Elevador 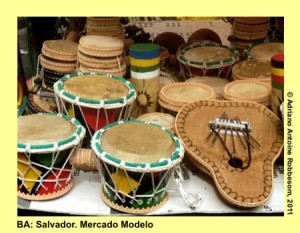 Music is of essential importance in Salvador 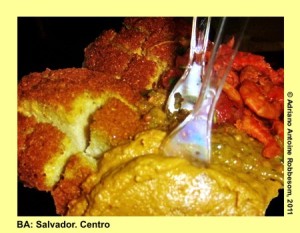 After spending one week in Salvador, back in
Minas Gerais…