Destination São Luís, capital of the state of Maranhão.
Images of the bus travel from Belo Horizonte to São Luís and Barreirinhas, hour by hour. Part one.

Below, the first series of five, showing the bus travel from Belo Horizonte to São Luís, via Barreirinhas. A travel of 2700 kilometers that took two full days. Each major image shows one hour. The smaller images were taken within a period of 10 minutes each.

According the Brazilian way of life, the scheduled departure time was at 2 PM, but that the real departure time was much later. This travel was no exception. Only at 3 PM, the first travel luggage was collected in the cargo compartment. We had to wait more ninety minutes, at half past four, to leave the university campus. About thirty minutes later, Belo Horizonte was left behind us. The bus followed the highway to Bahia, meandering along the slopes of the mountains in Minas Gerais. The latter picture shows roadworks.

The sun was already to its way to the horizon. It was a wintry day in July. At day, the temperature was acceptable: 26 degrees. But soon the temperature would drop quickly, to nine, ten degrees. I had prepared myself for the cold: a winter coat and a spare blanket. Some travel companions had their winter duvet, as extra protection against the cold in the mountains, at night.

It became dark, I could store my camera. We were entertained with some DVDs, among which a performance of Cirque Soleil, that was approved by everyone. It was already 1 AM, when most of us were asleep. The two bus drivers continued on the mountainous highway in Minas Gerais, towards the Bahian border. At half past four, there was a short stop in Itaobim, nearby the Bahian border. Everyone resumed the night rest. I awoke at 7 AM, and started to use my camera again, for many more images. 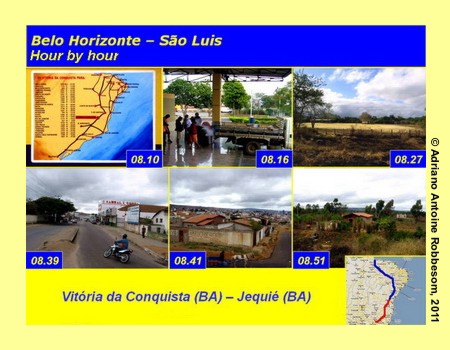 At eight, there was a stop in Southern Bahia, to have some breakfast and to refresh ourselves. The stop was at one of the roadhouse that are equipped to host interstate bus passengers. These roadhouses generally are more expensive (sometimes MUCH more!) than regular restaurants. Many complain, but due to the lack of a better alternative, they buy some coffee and a snack. Sometimes you may have some luck to meet road vendors, as shown on the second image. Freshly cooked corn. With some butter, it is a very cheap and delicious snack. 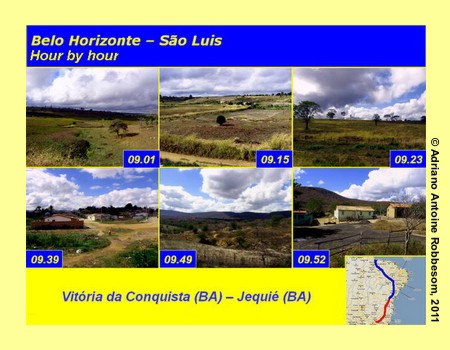 The wintry landscape in Southern Bahia appeared to be scarcely populated and very dry. It had not rained since last March, as it also was the case in Belo Horizonte. The plants and trees needed to wait until October to receive fresh rainwater again. In November the rain showers will intensify, until January or February. A LOT of rain may fall in these months.

When traveling towards Northeast Bahia, the landscape appeared greener, and more moutainous. The bus travel from Vitóra de Conquista to Jequié took almost four hours. A distance comparable with a travel from Brussels to Paris. And at Jequié, we were not even half way our travel….

The bus travel is described in the following episodes: