Destination São Luís, capital of the state of Maranhão.
On the way in Bahia; besides breathtaking landscapes, also impressive skies can be enjoyed.

I woke up at quarter past six, after having spent the first night in the bus. I slept so deeply, that I hadn’t noticed that there was a stop at a roadhouse. It now appears that I am accustomed to spend my nights in a riding bus. It is really necessary to be able to sleep in the bus, when you are on the way for two full days. During the night, the bus followed the highway to Bahia, meandering along the slopes of the mountains in Northern Minas Gerais, and Southern Bahia. High in the mountains, that means that the thinner air may cool down greatly, and we had felt that clearly. Almost all sliding windows were closed to shut out the cold, the blankets were wrapped around the legs. The bed sheets that we carried with us, were used to cover our body against the night chill. We also had brought our comfortable pillows with us, to gave our heads a more comfortable and relaxing position. Indeed, you take all your bed stuff with you, when you have a very long bus travel. While the others were still sleeping, I could enjoy the magical images of a colorful interplay between the rising sun, the sky and the clouds:

Saturday morning 6.30 AM, the rising sun
about to break through the clouds

06.32: A surprising combination of pink and
light blue 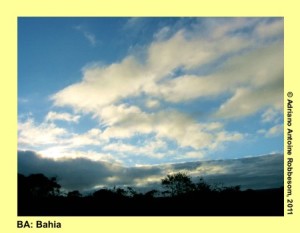 6.40 A very dynamic interplay, only 7 seconds
after the previous image.

8.26, Almost two hours later, the sun
appears to have won. 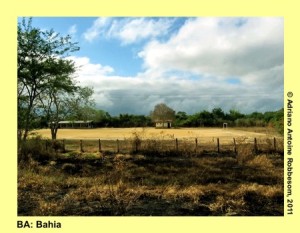 8.27. A sunlit soccer field. In front: silent and
broken witnesses of a roadside fire.

.
8.34 Only a few minutes later: the clouds
take their revenge. 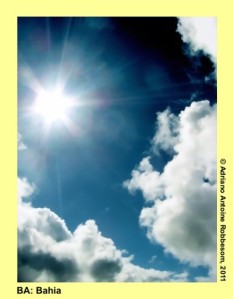 9.24 I really prefer this kind of cloud bursts.

8.20 Grey clouds, grey asphalt.
The Northern Sun at the horizon….

NB. The photographs were taken from a RIDING bus…