Destination São Luís, capital of the state of Maranhão.
Images of the bus travel from Belo Horizonte to São Luís and Barreirinhas, hour by hour. Part two.

Below, the second series of five, showing the bus travel from Belo Horizonte to São Luís, via Barreirinhas. A travel of 2700 kilometers that took two full days. Each major image shows one hour. The smaller images were taken within a period of 10 minutes each.

We had left Vitória da Conquista a little after eight in the morning, and we arrived in Jequié, about four hours later. The bus driver stopped there at a cheap restaurant, where we had our warm meal. Our bus driver is very experienced, and knows this route very well. Therefore, he knew where to stop for a cheap meal. For a  little more than seven reais (about 3 euros), we had a complete meal that we combined from a buffet. Here, the landscape is a little greener, we are approaching the Bahian coastline.

I was just thinking that the landscape should be greener when approaching the coastline. But the pictures above show the contrary. It is possible that the mountains in the south may interfere in the arrival of rain clouds here, resulting in much less rain. I should ask some colleagues of Geography about this. The very diverse and hilly landscape showed local differences. And that made this travel more interesting. The landscape appeared to undergo a continuous metamorphosis when traveling along it. Sometimes it appeared as if the landscape is completely different at every kilometer. I did not want to close my eyes for a nap, as many travel companions do. I tried my best to keep my eyes open, at least until sunset. Only then I gave my eyes some rest. 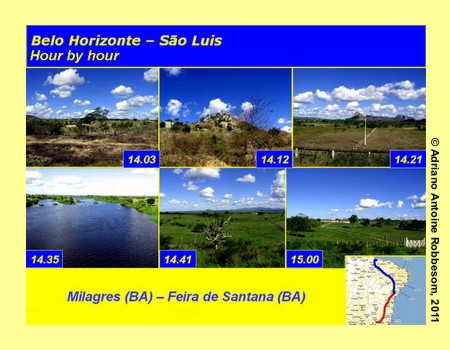 We had our next stop in Milagres (“Miracles”). The mus needed a few hundred liters more of diesel. Just before this stop, we had crossed the Paraguaçu River. The landscape was much greener in the proximity of this river. Here it was also a little more plain, as if I was in the European Plains for a while. Just erase the cactus plants in your mind, and there appears a landscape that is quite similar to a Dutch landscape.

A big city was approached, Feira de Santana. Feira de Santana is located at a Brazilian stone’s throw from Salvador de Bahia, capital of the state of Bahia. In the early years of the Brazilian colony, Salvador was the capital of Brazil, until the transfer to Rio de Janeiro in 1763. In 2006, I visited Salvador, and about ten companions of this travel were there too. We still have very good memories of that unforgettable week in Salvador. The last picture shows some nostalgia: an antique carousel on a playground.

The route until Feira de Santana was more or less the same route that was followed last year, to Salvador, with the exception that there was a deviation to Olivença, a beach location south of Ilhéus. From Feira de Santana, the route was totally new for me. Straight through the Northwest of Bahia, then through the state of Pernambuco. I had visited Pernambuco in 2005, when I traveled to Recife and Olinda, during carnival. Following Pernambuco, the state of Piauí would be crossed, before the state of Maranhão would be reached. We were half way…

The bus travel is described in the following episodes: