Destination Curitiba, capital of the state of Paraná.
The first ten bus stops of the touristic city tour through the city of Curitiba.

Click here to view ‘General Information’ about Curitiba (including videos) . 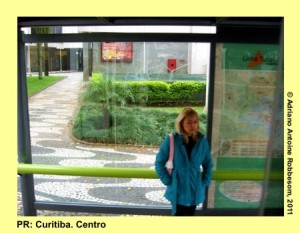 This blond girl was looking suspicious
at my camera…

The white tourist bus is also called the ‘Jardineira’. According the leaflet, the track counts 25 bus stops, over a distance of 44 kilometers. The travel time is about 2.5 hours.

The 25 bus stops are described in this and next chapters:

This square, in front of our hostel, has been named after the freedom fighter who was condemned to death at the end of the eighteenth century. This square is the start of the track of 44 km long.

The Flower Street, an important commercial area in the city.

The 24-Hours Street. The name already discloses that one may come here literally day and night for fun, food and shopping. Anyway, this street was being closed due to reforms when we arrived there in 2008…

Convention Center, a complex with a number of convention rooms and facilities for large-scale meetings and exhibitions.

The Railroad Museum, inside the Shopping Estação. This museum and shopping already are described HERE.

The Paiol Theater, a former munition and gunpowder storage. This theater already is described HERE.

The Botanical Garden, with a copy of the London Chrystal Palace. The garden is described HERE. 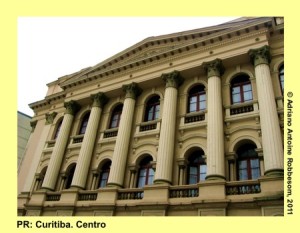 Facade of the university

The bus and railway station, and the nearby city market. These are described HERE.

The Guaíra Theater and the neighboring main building of the Federal University of Paraná. The university is the oldest in Brazil. 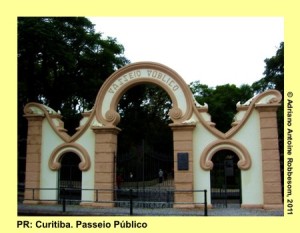 Passeio Público is a park annex zoo. The entrance gate is a replica of the antique gate of the dog cemetery in Paris. The Arab Memorial is inspired upon the Arab architecture. Inside one may find a library.