Destination Rio de Janeiro, the first travel to the former capital of Brazil.
An exhibition in Centro Cultural do Banco do Brasil, about the artist Aleijadinho. 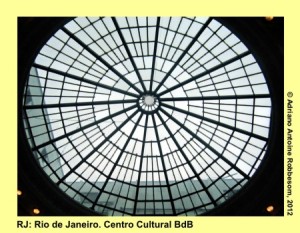 The dome of the Centro Cultural Banco
do Brasil

Rodrigo and Deborah had heard that a very interesting exhibition was going on in the cultural center of the largest bank in Brazil: Banco do Brasil. For me it was new to notice that a bank runs a sort of private museum. Banco do Brasil is not the only one in Rio, other banks such as Caixa, Banco Bradesco and even Banco Real (now Santander), Correios (the Brazilian Post Office), Ministries of Justice, and Finance. The banks and ministries as sponsors and keepers of cultural heritage. The city of Rio hosts many museums and exhibition halls. The Rio Guide, which is published bimonthly, recounts dozens of interesting museums. It is impossible to visit all these museums during a short stay in Rio. I should live in Rio, to taste all of the very rich history and culture in the city. To me, some museums seem worth visiting: religious art and treasures, Brazilian culture and history, Brazilian participation in World War II (among others they fought in Italy), Museum of the Subconscious, with art produced by psychiatric patients, Museum of the Brazilian Empire, Museums of indian culture and art. There are too many to mention, too many to visit them all. I will have to return often, in order to visit some of these museums. It is clear that Rio is much more than beaches and Carnival. 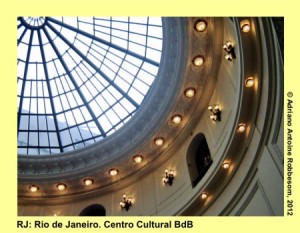 We entered the cultural center of Banco do Brasil. It was an impressive building, in an architecture style that I could not easily identify. With a glass dome in the middle. The bank housed several exhibitions and space for theater plays. There was a small exhibition about the history of this cultural center on the ground floor. Enlarged photographs demonstrated the history spread over decades. Yellowed photographs, black and white photos, color photos. Deborah was more interested in an exhibition at a higher floor: an exhibition about the famous Brazilian artist Aleijadinho (‘the little cripple’). Before we could enter this room, I had to store my backpack and my camera in a safe. It was not allowed to photograph. My eyes had to do all the photographic work. 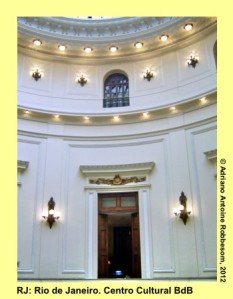 The exhibition was more than worth it. Much was invested in the composition of the exhibition: the accompanying explanatory texts (in Portuguese and English), the visual effects, and the video presentations. It was anything but a crowded exhibition. There was a tranquil atmosphere; visitors were able to see everything without being hindered by a crowd. There was paid much attention to details of the work of the sculptor. How he sculpted his human models, in what posture, expression and relationship to each other. This man was clearly a genius. Seriously handicapped as he was, he created his sculptures as if he himself was among them. You could imagine that Aleijadinho himself would fit in this group of sculptures. His soul, his mind was clearly present in his sculptures. 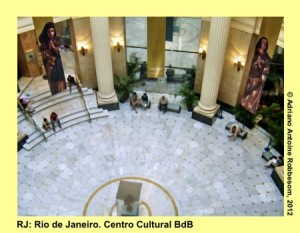 A timeline demonstrate his life, as well as the Brazilian and world history. A turbulent Brazilian history at the time of the Portuguese domination. Of revolts and revolutions. Although this exhibition confirmed his existence, there are many indications that may question his existence. Critics argue that Aleijadinho is no more than a legend. That Aleijadinho is the product of a clever strategy – during the reign of Getúlio Vargas – to put him forward as a good example of a successful Brazilian. Aleijadinho – his full name was Antonio Francisco Lisboa – had a Portuguese father and a slave mother, he was a mestizo. Moreover, due to probably syphilis or leprosy, he obtained abnormalities of his hands and feet. Despite his background and his physical limitations he was able to work out his brilliance. A role model for the Brazilian people.

About 1730, Aleijadinho was born in Vila Rica, now better known for its present name Ouro Preto, former capital of Minas Gerais. In 1814 he died in his hometown. Aleijadinho is a synonym for the famous statues of the 12 prophets in Congonhas, a town about 100 km away from Belo Horizonte. These twelve prophets are arranged on the steps leading to the sanctuary Bon Jesus de Matosinhos. The sculptures are made from soapstone, a relatively soft rock that is extracted in the immediate vicinity. The historic cities of Minas Gerais – Ouro Preto, Congonhas, Mariana, São João Del Rey, Tiradentes, Sabará – possess one or more baroque creations of this great artist. 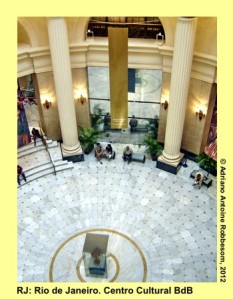 We spent our time and attention at this impressive exhibition. I watched the videos that explained about particular details of his work. The shapes of the images, hands, faces, everything seemed to have a certain function, some genial idea, a deeper meaning. The shape of the hands was not sculpted randomly, but the position of the arm, hand and fingers had their own separate stories. His works have always been an open book, but you must make some effort to read the contents and to understand it..

One comment on “Travel in Brazil: RIO DE JANEIRO (15). Aleijadinho in Centro Cultural Banco do Brasil”