Destination Maceió, capital of the state of Alagoas.
1. The bus travel, through the states of Minas Gerais, Bahia, and Sergipe.

>> Click here for more information about Maceió (including videos) <<

University students are primarily found at the university campus. They attend the lectures, they obtain practical experience in various departments, and they run courses at the faculties. In addition, the student seeks the opportunity to relax in the cafeteria, where food and drinks can be obtained. At the student union, where students may play sinuca (a Brazilian variation on American pool billiard), and may participate in intimate barbecue nights with their fellow students. This type of student life is essentially not that different as from the Dutch student. Student conferences are organized during the long weekends and holidays. Regional and national conferences. In July 2006, I was invited to join a group of students, who study for librarian (biblioteconomia), to travel to the National Congress in Salvador. By bus, of course.

Since then, I am invariably asked to accompany the students, now they know my reputation as a photographer. As a result, I got to know the country and have obtained many friendships among the students. At such a conference, the students learn not only know each other’s work, but also each other. Friendships and even love affairs are born during these conferences; students get to know then who works and studies where and what. It would not be a bad idea to set up these conferences in The Netherlands, and probably in the European Union, because during my study in Amsterdam, I had no contact with biology students in Groningen or Maastricht, for example. In Brazil, I have attended student congresses in Salvador, Florianópolis, Fortaleza, Curitiba, Maceió, Recife, João Pessoa, and Campo Grande.

Alagoas is the third smallest state of Brazil, after the Federal District and the neighboring state of Sergipe. It is slightly smaller than Belgium. In total three million people live there; one third of them live in the capital, Maceió. Alagoas is the poorest state of Brazil, with the highest illiteracy rate, the highest infant mortality, the lowest life expectancy, and the lowest HDI (Human Development Index). The state is largely dependent on tourism. Many tourists know to find the paradisiacal beaches of this small state. Not only around the capital, but also the more remote beaches as the acclaimed Maragogi, the fashionable Praia do Frances, the more secluded Praia do Gunga, and the pristine beaches like Coruripe in the south. The capital, Maceió, is not a historical city: it was founded in 1815. It is a city of sharp contrasts: from the poorest slums to the most luxurious shopping malls and Shopping Iguatemi, whose luxury can compete with the same shopping malls in the more prosperous cities such as Rio de Janeiro and Florianópolis.

Not a very straight highway…

The congress in Maceió was planned in July 2008. We gathered on the campus at a cool winter evening at the end of July. According to the famous Brazilian tradition, almost no one arrived at the appointed time. The majority just arrived at about thirty minutes after the appointed time, to leave their luggage in the bus cargo. Only at half past eleven, more than ninety minutes later than the scheduled departure time, the bus departed from the university campus. There were still several hours to go within the enormous state of Minas Gerais before we would cross the border with Bahia. A group of students amused themselves with alcoholic drinks, while another group was amusing themselves with videos. I participated in the latter group, to be clear. In the morning, the border of Bahia and Minas was crossed, and was followed by another long drive within the state of Bahia, which size almost equals to that of Minas. The border with Sergipe was about to be crossed at night, and at dawn the river border with Alagoas would be crossed. At seven AM, after a bus trip of 31 hours, we arrived on the campus of the Federal University of Alagoas. Here we would camp for a week. 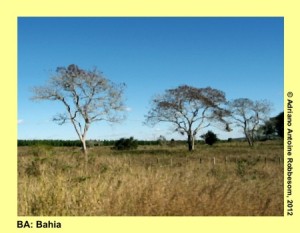 Trees lose their leaves, even in a tropical winter

The students were divided into several classrooms. They mounted their tents and rolled out the mattresses. I rolled out my thin mattress, amid a row of eight together. A line was spanned across the width of the room, to leave towels and swimwear to dry. The accommodation was including meals and access to various cultural events at night. Not far from our bed stood a wooden shack where coffee, soda, juice and light refreshments were offered at low prices. We all frequented this stand during that week. With so many students together, one may imagine it was anything but quiet. This unrest was further reinforced by the traditional ‘arrastão’ at night. This arrastão goes as follows: the rei (king) visits the dorms, accompanied by a very noisy crowd. He then starts his speech, which is being interrupted constantly by his followers. And his companions use all the necessary power and noise to disturb the sleeping students from their peaceful sleep. The bright fluorescent light and the deafening noise you make it impossible to sleep. Fortunately, only the first nights brought this noise; during the final night the crowd was too tired to make their nightly visits, so that we continued our peaceful sleep without being disturbed.

Crossing of a little river..

We should not just attend meetings and cultural events, but we would make trips to various touristic locations around Maceió. Given my reputation as a photographer, I was asked by several groups of students to join them on their trips. I was therefore able to choose between various offers in this week, even taking into account the vagaries of the Brazilian way of thinking and acting. Frequently, plans were drastically changed, so sometimes I had to change my schedule, and had to change from group in order to maintain my travel goals. The results of these trips will follow in the next contributions.

A river in Alagoas

An urubu (black vulture) lands on a beach
near Maceió.

An oil duct near Maceió

One comment on “Travel in Brazil: ALAGOAS (01). Bus Travel Through Minas Gerais, Bahia, and Sergipe”