Destination Florianópolis, capital of the state of Santa Catarina.
Once a presidential residence, now a historical museum, called after a famous poet from the city. Part one.

Downtown Florianópolis. We had to keep patience, to get some coffee and a sandwich. The entire center of Florianópolis was closed, still covered by the serene quietness of a Sunday morning. The local stores and restaurants would not open for just Vítor and me, who were that crazy to walk there that early. We walked another block, crossed another street. There was a square with a giant tree in the middle of it. An old fig tree, which branches were supported by heavy metal strut tubes. We observed a building that was painted in pink, at the other side of the street. Clearly a historical building. We approached it, and we noticed that it was a museum. It was about to open at 10 am. Nice. But first some coffee. Just after ten, someone was lifting the shutters of the local Mac. That construction needed to be oiled urgently. The squeaking and grating sound was a torture for our ears. The Mac soldiers were already at their positions, drilled ready to attack the first customers with their cliché expressions. These poor soldiers really were in a big need of coffee. It was too easy to read the signs of fatigue on their faces. We ordered a cup of coffee and a croissant. The photographs on the display above the counter showed a much better image of the coffee and the croissant than was the cruel reality. The coffee appeared to contain too much water; the Mac (semi) bakery needs to attend a crash course in order to improve the quality of the croissant drastically. 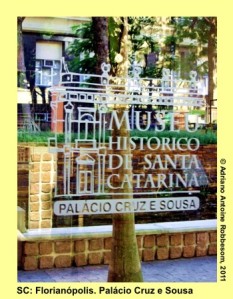 It was a quarter past ten when we walked towards the pink building. The entrance was on the other side, we had to walk around. A perspex board gave us the necessary additional information. The pink building is a palace, called Palácio Cruz e Souza. Now it is a museum: Museu Histórico de Santa Catarina. Nice. We already had started our walk through the history of Florianópolis, and this museum was a welcome addition. We entered the square. Some parts were covered with transparent plastic. Beneath this plastic, excavated objects from the early Brazilian colonial period were exhibited. Shards of dishes, pots and bowls. We then climbed the steps, to the entrance. The entrance fee was 2 reais, about 75 eurocents. It was not allowed to take pictures at the first floor. Too bad. I only could try to take some pictures of that floor, from the ground floor.

We took our time to read the history of the pink building:

“The historical museum of Santa Catarina was founded in 1978. Since 1986, the museum is located in Palácio Cruz e Souza, named after the great Symbolist poet, who was born in Desterro (the ancient name of Florianópolis) “.

There was more. It turned out that this building was constructed in the middle of the eighteenth century, to serve as the complex of headquarters and administrative offices for a number of presidents of the Province of Santa Catarina. It is built in typical Portuguese style, but has undergone many alterations during one century. At the end of the nineteenth century, drastic reforms were made, as ordered by Governor Hercílio Pedro da Luz. Uruguayan and Italian artists were responsible for these reforms. In time, the building was subject to more reforms, and suffered lack of maintenance. Another restoration took place since 1977, and since 1984, the palace is added to the list of Historical Heritage of the state. The restoration has brought the building back in the style at the time of Hercílio Luz.

The palace appears to be an important example of the eclectic architecture of the late nineteenth century. This movement is a mix of earlier styles, predominantly the baroque and the neo-classical styles. The ceiling paintings show figures from Greek mythology, and symbolic, allegorical figures. On the first floor, the rooms were furnished as they were used in the period around the turn of the nineteenth to the twentieth century. We had to store our backpacks. We climbed a staircase that was covered with a red carpet. The wooden parquet floors already were pieces of art. Hence we were not allowed to enter with our shoes. There was a wooden box with over-sized slippers in each room. Slippers that covered your shoes. Slippers that really could be considered as slippers, as if there was some greased wax on it, to clean the floor. Each room had its own theme. The information boards told us about the function of that room. There was a reception hall, a hall for women, a room for the military officer (a large desk, with the seats at a respectable distance), a music room, a lounge. Everything breathed an atmosphere of that time. The furniture, the richly decorated walls, the gleaming wood floors, the painted ceilings. A lust for the eyes, enrichment for your memories. We took plenty of time to see and read everything. It was very quiet at this hour; there was no one disturbing us by screaming or pushing us aside.

We spent about one hour on the first floor. We also were spending some time on the landing. The walls were covered by the coat of arms of all municipalities in Santa Catarina. Places like Floripa itself, but also Joinville, Blumenau (famous for its Oktoberfest). We went downstairs, and entered a space with an exhibition about the poet. João da Cruz e Souza (1861-1898) was a son of slaves, who were released by Marshal Guilherme Xavier de Souza. João was adopted by the marshal and his wife, who did not have children of their own, as their son. He was educated at the best schools, but when his foster parents died, he had to quit. He faced racism, and was unable to compete for public office. João moved to Rio de Janeiro, where he became acquainted with French symbolist poetry. He wrote for some newspapers, but worked as a railway worker, under miserable conditions. João married a black woman, Gavita, with whom he had four children. Two of them died in their childhood. João suffered TB and moved to Sitio, a city in Minas Gerais, for treatment. He died there at the age of 36.

One comment on “Travel in Brazil: FLORIANÓPOLIS (08). Museum Palácio Cruz e Souza I”