SALVADOR (16)
Getting Known with Roasted Cheese and Acarajé

Destination Salvador, capital of the state of Bahia.
Preparations for the first night in Salvador: Introduction with roasted cheese, acarajé with coca cola, and students from all parts of Brazil.

At seven pm, we were waiting for the ladies, who were extremely busy preparing themselves for the party at night. The ritual of taking a bath, putting a number of lotions, creams and more creams, following by painting their face with a color palette, is very intense and time consuming. We waited on the veranda, when suddenly a guy was walking up the stairs with a plastic bucket under his arm and a metal kettle in his hand. He directly went to the owner and asked him permission to enter the veranda. He then offered his merchandise. A block of white cheese on a skewer. No Gouda cheese or other famous European cheese, but local cheese from Bahia, which has a taste that is similar to that of cheese from Minas. A light, slightly salted cheese with a distinctive taste that you could not easily fit to any cheese in Europe. But it was not just cheese. The guy took the kettle, which was filled with hot charcoal, and started to use a piece of cardboard, to heat up the charcoal. When the charred pieces were glowing red, he placed a cheese stick above the kettle. Only thirty seconds later, the outer layer of the cheese chunk already started to melt, by the heat and the rotations of the stick. The final result was a chunk of roasted, melted cheese, a delicious snack!

Cheese being heated above charcoal in a kettle

It was already past eight, when we took taxis to the faculty. Helpful students were there to guide us to the reitoria. We walked and climbed along the roads. We mineiros, as inhabitants of Minas Gerais are called, appeared to be the final group to arrive. But we were just in time for the welcome meal, which consisted of acarajá and coca cola. There was a long table full of plastic plates, napkins, cutlery, and the ingredients for the acarajé. Two women in traditional Bahian dresses stood at the end of the table. One of them unwrapped cabbage leaves that contained abará, and distributed them on the plates of the hungry students. The other woman seized a quantity of vatapá (angu) and caruru (quiabo) on our plates, and added some shrimps.

It was a huge crowd, but I had extensive international experience, not to feel uncomfortable in the crowd. I quietly grabbed my desired ingredients, thereby gratefully accepting advice from Igor. He is familiar with these dishes, and advised me which ingredients were too spicy. I gradually filled my plated with the ingredients, to a complete acarajé. Carol already had managed to fill her plate and I stood next to her. She was so sweet to take a cup of coke for me. She was watching me admiringly how I managed to empty my place, and went for another plate. I emptied that plate too, and went for the third round. Her admiration had changed into a slight concern. 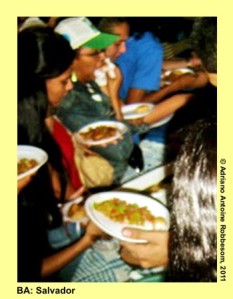 A huge crowd of students surrounding
the table with acarajé ingredients

I joked to her that I had to gain weight, but she shook definitely no, “Acho que não!” (Definitely not!) Clear language, her opinion was clear. And while my own mother had observed my recent pictures, and was asking sincerely if I was still eating enough. To whom should I listen to now? To my mother or to Carol? Who is right? I am! I listen to myself. And now I prefer to listen to Carol, because she is near me now, while my mother is more than then thousand kilometers away, now waiting impatiently for a new load of pictures that I will send to her. Pictures of these holidays in Salvador. For both my mother and father, it is some kind of a small photo trip in Brazil.

The flag of Minas Gerais

The welcome meal was ended, we were guided to return to the faculty where the opening activities were about to begin. This time we took a short cut, across the hilly campus, on irregularly laid stones that served as a descending staircase. As a born Capricorn I felt at home on these loose stones, and I could give a helping paw to Carol and her friend. We descended gently down on the stones in the gloom of dusk. The faculty was already crowded by students; it seemed that all Brazilian states were represented there. From Santa Catarina in the extreme south to Roraima in the far north. Cold Paranaenses, cool Paulistanas, Cariocas with their mundane appearance, the more diligent Mineiros, and the warm and sometimes hot Northeasterners. All states met here in Salvador, vibrant heart of Bahia. If you want to make a comparison with the Netherlands: you can compare the state of São Paulo with the province of South Holland, and the city of São Paulo with Rotterdam. The state of Rio de Janeiro with North Holland, and the city of Rio with Amsterdam. Minas Gerais is then Brabant, and Belo Horizonte is industrious Eindhoven. And Bahia? That must be burgundy Limburg, and Salvador as Maastricht. Hopefully I did not offend anyone with these comparisons…

ME, the ‘holandês’, draped with the
flag of Minas Gerais

Our group had brought the flag of Minas Gerais: a red standing, equilateral triangle on a white field. Around the triangle is the motto “Libertas Quæ Sera Tamen” (Long awaited Freedom). The flag was folded out, and some of our enthusiastic group started to sing the anthem of Minas. I noticed that some students from other states could not really appreciate this attitude; they showed their disapproval and indignation, and sighed: `those mineiros again…`. For me, it was both interesting and amusing to witness the mutual expressions of patriotism and resentment. I took some pictures of the group with the flag, and they insisted that I should join them for another picture. For me, this was some kind of acceptance by them, that they invited me, a gringo from Holanda, to join their group of mineiros. Carol wrapped the flag around her, and I took a picture of it. Then they wrapped the flag around me, the flag with the triangle was draped on my shoulders. I never had done this before with the Dutch flag even…

5 comments on “Travel in Brazil: SALVADOR (16). Roasted Cheese and Acarajé”