(Click here for the complete coverage of ‘Rio de Janeiro’)
. 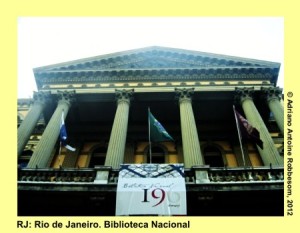 Facade of the National Library

During my second travel to Rio, I was accompanied by library scientists and students of Library Science. It is called biblioteconomia, a word that does not translate easily in Dutch or English. The French have such a word, according to the hits of Belgian and French universities and institutes, when searching with the help of Google. But the Dutch equivalent simply does not exist. I gave up. But it was interesting to notice that a very famous American woman has completed this kind of study in the United States: former First Lady Laura Bush. The travel companions did not apply for the Brazilian presidency, or for Brazil’s First Lady. All of them are more or less from average families in the Brazilian middle and upper class. And all were interested in visiting the National Library in Rio. Now, the bus was parked at the other side of the main entrance of one of the largest libraries in the world. 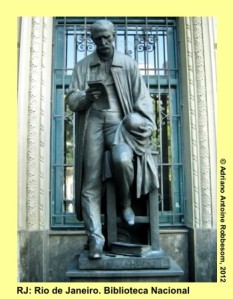 We left the bus, left our luggage in the bus; the grumpy bus driver would guard them. We closed all windows and curtains; everything was left out of sight from the outside. It is always better to avoid, and this cliche could not be repeated too often. We still had to wait one hour before the group could enter the library. We invaded the nearest padarias (bakeries) and lanchonetes (lunch rooms) for a quick breakfast and strong coffee. Our breakfast was a toasted sandwich with melted, slightly salted butter. Our empty stomachs welcomed this salty food with their characteristic sounds. Stella, Josiane and I decided to walk around. The sun had finally broken through the clouds, and started to shine brightly. It caused a sunny mood among many of us, even after having spent the night in the bus that is always much less comfortable than your own mattress.

Eclectic style of the backside.

We decided to follow a random direction, towards some towers of what we considered historic buildings. Indeed, we encountered a monastery that was built on a slope, but more on that later. About thirty minutes later, we returned to the square that was close to the entrance of the library. It was almost ten in the morning; a number of students had lost a great of their patience: they were swinging with their legs. As if they suddenly had stepped on broken glass. We then crossed the crowded avenue, the Avenida Rio Branco. We had to climb a number of stairs before we could enter the historical library building. We suddenly breathed the smoke of the past. Many were overwhelmed by the exuberant ornamentation of the interiors. The building dates from 1905, and is an example of eclectic architecture. This style was a reaction to the ‘neos’: neo-gothic and neo-classical. Basically, the eclectic architecture is a selection of all styles that were best for the design, and for the implementation of new materials and techniques. Many buildings in São Paulo, Rio de Janeiro and Belo Horizonte have been built in that style. The building of the National Library includes neoclassical elements, has six Corinthian columns at the front, a picture group that represent allegories of the Republic, the Press, Bibliography, Cartography, Paleography, Iconography, and Numismatics. Two other statues represent Intellect and Study. In 1910, the building was officially inaugurated. 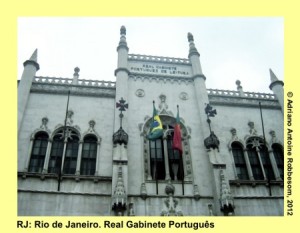 It took some time, before everyone had finished gaping at the impressive hall and had made the necessary digital images. They then created a line in front of the registration desk. No visitor’s badge without registration. No entry without visitor’s badge. The entrances to the libraries were secured with electronic detectors. It was also not allowed to carry bags inside the library; they had to be guarded in lockers. I was not about to accompany the group. They already had informed me that it was not just a tour, but also lectures about Library Science. I’d like see the impressive library’s historical collections (including those of the Brazilian Portuguese royal and imperial families) and the huge collection of nine million volumes, which is guarded inside. This library, dating from 1755, is number eight in size of the national libraries in the world, the largest in South America, according to UNESCO. By comparison, the Royal Library in The Hague has 3.5 million volumes. 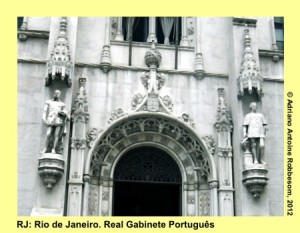 Since the Biblioteca Nacional has become a public institution, free access is granted. Provided that you follow the safety and registration requirements, of course. I did not stay in the library, but I had something else in mind: the exploration of the historical center of Rio. I took the advantage that I already had arrived in the center. In the next articles, I will describe how I have crisscrossed the historical center like a drunken ant. By accident, I encountered another library in the center. A much older library: the Real Gabinete Português de Leitura do Rio de Janeiro. The Portuguese Royal Library of Rio de Janeiro. This library has the largest collection of Portuguese works outside Portugal: 350 thousand volumes, which is comparable to ten percent of the collection of the Koninklijke Bibliotheek (Royal Library) in The Hague, to give a comparison. 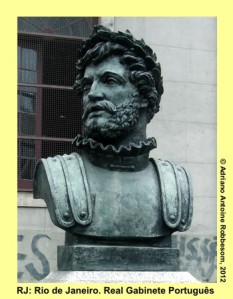 The Real Gabinete was founded in 1837, and moved into the present building in 1880, three hundred years after the death of Luis Camões, the famous Portuguese poet. The first stone was laid by Emperor Dom Pedro II. The building is constructed in the neo-Manuel style. There is a statue of Camões on the square, in front of the library. I entered the historic library. I was surprised a bit that I got permission to take pictures. The large room had high walls with railings, which formed floors for the endless rows of boards that were filled with dark brown, heavy leather-bound volumes. The high dark walls filled with books, the large open space, where the dome light had weakened. This space breathed an atmosphere of peace, of history, of eternity. If all books were given a voice and were able to speak, and would speak each own story… Or would cackle together … All these books were an open book. You had only had to find the time and the motivation to find out what this open book wants to tell us …