Destination Curitiba, capital of the state of Paraná.
A wire opera house at a former rock quarry

Click here to view ‘General Information’ about Curitiba (including videos) . 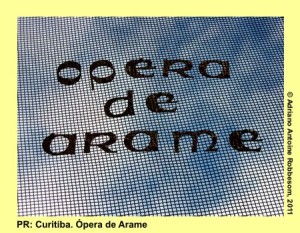 One of the tourist highlights of the city tour in Curitiba is the Ópera de Arame. It is a large circular structure that is built entirely of steel tubes and perspex plates, with a capacity of more than two thousand spectators. The complex is fully transparent and ensures excellent acoustics, thanks to its location at an abandoned quarry, surrounded by a small lake and lush greenery, and a thirty meter high rock as background. The building can be reached via a footbridge, which of course is constructed from steel tubes.

Bridge leading to the entrance

The location is a former quarry, where also an asphalt plant was located. The city conjured the site into a festival area, representing a capacity of thirty thousand spectators. The stage was almost five hundred square meters. Thanks to the capacity and the acoustic qualities, important national and international names as José Carreras, Paul McCartney, Milton Nascimentos, Roberto Carlos, David Bowie have acted there. The site is named ‘Parque das Pedreiras’, the festival site ‘Espaço Cultural Leminski Paulo’, named after the famous poet (1944-1989) from Curitiba. 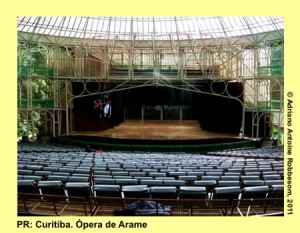 The stage and the seats.

In 1990, the new project was started, and in just 75 days time, the entire tubular structure was erected under the responsibility of the architect Domingo Bongestabs. The inauguration took place in 1992 with the famous play ‘A Midsummer Night’s Dream’ (Sonho de uma Noite de Verão) by William Shakespeare.

Roof of the opera house, at day…

The Opera House and the park form a unique site. The park is a piece of the Atlantic Forest, where a number of endemic birds may be observed. An artificial waterfall gives the surrounding greenery an idyllic atmosphere. In the evening, the Opera House is illuminated, generating a magical spectacle. 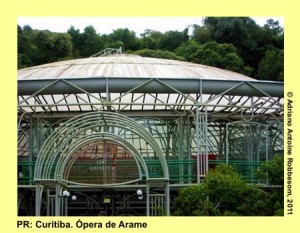 Front of the opera house 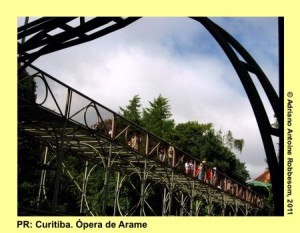 The bridge, as seen from the steel construction 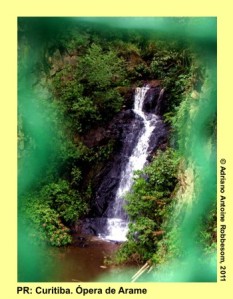