Destination Salvador, capital of  he state of Bahia.
Candomblé and capoeira demonstration dances at the UFBA Campus in Salvador.

Click here for general information about SALVADOR. (including videos) 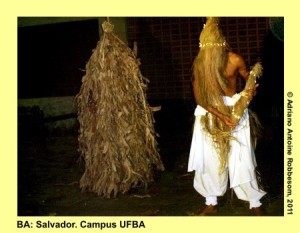 Candomblé
I was with fellow students at the campus of the Federal University of Bahia, in Salvador. It was almost half past ten, when one friend, took me by the arm. She pulled me through the crowd, and I was dragging Carol with me. The three of us struggled through the dense mass of students, and found a spot at the corner of an open space where a demonstration of candomblé ritual dances was about to start. Candomblé is a religion in which elements of African natural rituals and elements of the Catholic faith are intertwined. It was forbidden for the slaves to exercise their African religious cults. As a reaction, the slaves cunningly gave their gods the names of Catholic saints, in order to continue practicing their rites. The rose offerings to the sea on New Year’s Eve, as I had experienced earlier this year in Vitória, is such a candomblé ritual: offerings for the goddess of the ocean, Iemanjá. This goddess was given the Catholic name Our Lady of the Glory.

A few months earlier, in February, when I was about to participate a birthday party of a good friend, I was walking with my former girlfriend along some basket that contained the corpse of a chicken with a few red peppers on it. My former girlfriend shivered visibly. She told me that it was a candomblé ritual, but one with bad intentions. For example, to cause bad luck to a certain neighbor. I showed respect for her, and did not take a picture of it. 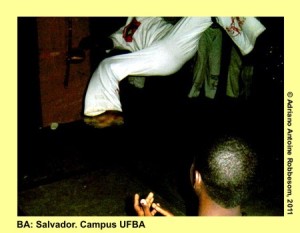 Gringo
The dancers of this demonstration stood ready for their performance. Some of them looked nervous, to perform their act in front of a large crowd of students. And in front of some foreigners like me. For me it was quite strange that there was vigilance at the entrances. As a result, I was able to attend this private party. A free welcome meal, followed by the demonstrations of candomblé and capoeira. As an eyewitness to the typical Bahian culture. The long bus ride to Salvador was more than worth it!

The demonstration began. With a driving rhythm produced by percussion instruments. Two dancers appeared on stage. They were dressed in long tissue strings, as if they had long brown hair and beards. For me it was the first time to witness such a dance show, and, as it turned out, I was not the only one.

One of these dancers represented the god Omulú. In the sequel the other Orixá gods were introduced. From Obá to Ogum of Oxóssi to Iemanja. In the final act, Oxalá was carried on the stage. It was a breathtaking performance, for me, and for all my friends. Sometimes you could watch some fragments of such an act on TV, when you are zapping, but it is quite unique to watch a live performance. I was happy not have missed this opportunity. I was standing on a block of concrete, so it was easier for me to take pictures. Carol stood beside me, next to the block. She was holding my thigh, and I stroked her curly long hair. This candomblé dance lasted fifty minutes, at least. It was followed by another dance demonstration by the same group. This dance, that lasted twenty minutes, appeared to be a more Christian variation of the candomblé dance. At the end of the demonstrations, all dancers were presented to the audience. Some of them took the opportunity to welcome the students. Unfortunately, it was hard to understand them because of the noisy crowd. There was a strong applause for the dancers. A spontaneous standing ovation. Not difficult, because no one was seated. 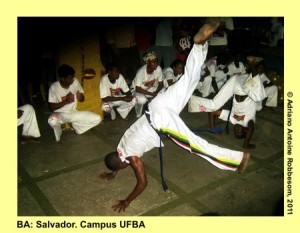 Capoeira
The demonstrations were not over yet. There was another performance, the capoeira. I already have watched some capoeira demonstrations in The Netherlands, during Queen’s Day and Liberation Day. It looks nice and a bit acrobatic, but… The roots of capoeira are here, in Bahia, in the northeast of Brazil. Here, where children learn to dance as soon as they are able to walk. Many teenagers practice their skills on the soft sand on the beach. In Belo Horizonte, I have watched a capoeira demonstration, with much interest. It was a real pleasure to witness the advanced acrobatics skills. At this evening in Salvador, a very professional group of capoeira dancers preformed two capoeira styles. The dances and acrobatics performed by these dancers surpassed my expectations. There was plenty of jumping, flips out, standing on the hands. They were accompanied by the exciting rhythm of the typical percussion instruments, among them was the berimbau. The entire demonstration lasted about thirty minutes. I had enjoyed it very much, and also my travel companions showed their excitement.

Tired…
And yet the evening was not over. A DJ took over; it was about time to dance. Dancing on various rhythms and styles. Forró, pagode, axé. When the DJ started, the floor was full of dancing couples, but the students were already tired because of the long travels. At 2 am, we left the faculty, and took taxis to our pousada. We quickly went to sleep, on the comfortable mattresses, for a sound a relaxing sleep, in Salvador….
By Dr. Adriano Antoine Robbesom
Original text in Dutch, translation with help of Google Translator