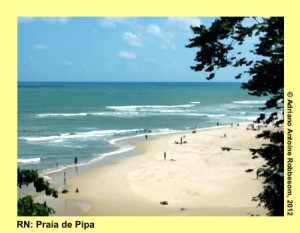 It was a rainy day at Porto de Galinhas, yesterday. We eagerly hoped for at least a day without rain. On our way to Pipa Beach, we had some rain. Since then, we had no rain. There were some dark clouds, but we also could enjoy some sun. During those sunny moment, the beach appeared to be subject to a complete metamorphosis. The beach did not look grayish, but turned into an eyesoring (yellowish) white. The ocean water gained the bright azure blue color. Our group had settled themselves on the beach, where they would sit down and have their drinks. Some girls spread their cangas and lied down to gain a bronze tan. the guys preferred plastic chairs under a giant umbrella. The local barman arrived quickly, and placed a plastic table. Only minutes later, he appeared again, with bottles of ice-cold beer and small glasses. 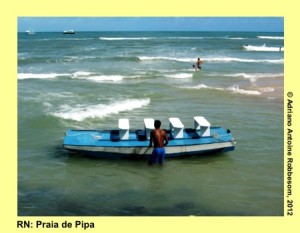 The shuttle boat, at low tide

(Foreign) tourist at such popular beaches are willing targets to a large number of locals who want to make good profits. But in an easy-going way. Many ambulant vendors wander on the beach, all day long, with their merchandise. Fishermen and small entrepreneurs rent their boats for short trips on the water. Some of them offer boat trips to the lagoon, where dolphins may be observed. In order to convince skeptical tourists, they even offer a see-dolphin guarantee. When there are no dolphins to be observed, you will get back the fee of that boat trip, worth 20 reais (8 euros). Like a Dutch saying: First see, then believe… 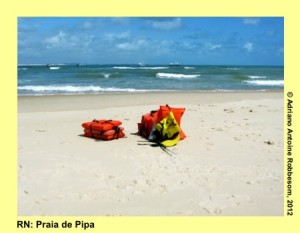 Safety vests on the beach…

Guarantee or not, we wanted to do this boat trip. We were offered safety vests. The crew then watched carefully whether we had tied them on in the right way. A small, flat boat carried us to a larger boat, and we went on board. The center of the deck was covered with a piece of canvas, where sun lovers were allowed to lie down. I did not join them, I preferred to walk around and take some photographs. My friends asked me to take some pictures of them, too.

On the way to the dolphin’s lagoon
Dolphin fins

It took about twenty minutes before the boat arrived in the lagoon, where dolphins were supposed to swim around. We all were somewhat skeptical about that, but soon we lost that skepticism when the first dolphin fins were observed. I was lucky to observe them too. However, other friends were not able to observe them, and son complained about that. We waited patiently for more opportunities to see the fins. They came, but they were also very fast and unpredictable. Impossible to record them or photograph them! I did not manage to photograph a single dolphin fin! Within ten minutes, I had observed the dolphins about twenty times. One good friend of mine did not see them at all. She complained with the skipper. He waved away her protest with a faint smile. She was one of the few  unfortunates who did not see the dolphins..

There was opportunity to jump in the water and float around the anchored boat. The majority of our group did not resist to float in the refreshingly azure blue ocean water. The orange safety vests kept them floating. Again, I took pictures of them, floating around. I did not join them. When everyone was on board again, the boat made a big u-turn before heading for the beach. A small group left the boat, and were carried by a smaller, flat boat to the beach. Others, me included, continued the boat trip for another thirty minutes. The boat brought us in front of the other side of Pipa Beach and then returned to the beach. The entire trip lasted more than ninety minutes. We were satisfied, we had seen the dolphins! For me it was the second time to observe dolphins in Brazil: six months earlier, I had seen them during another boat trip, from São Luís to the peninsula of Alcântara…

Some of us left the boat early…

We enjoyed some more time on the boat 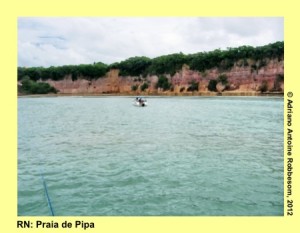 We noticed the dolphin fins here… 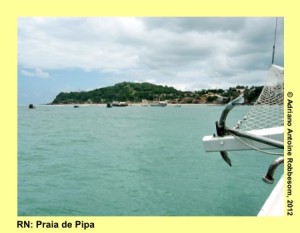 Back to the beach….

Other tourists had more luck…