Travel in Brazil: SALVADOR (32). Boat Trip To Itaparica Island I

Destination Salvador, capital of the state of Bahia.
The boat trip to Itaparica Island.

Going out until dawn or not, we had to wake up at eight. It was decided to travel to a a popular beach island: Itaparica Island. We would take the ferry boat to the island. This time, the ladies hurried, and the sleepy gentlemen, still enjoying their drunken daze, were much slower. I was one of the exceptions, I am naturally fast, when I need to prepare myself for another travel. We all were ready at nine, and we took the same bus that brought us at the base of the Lacerda Elevator the previous night. We had to cross Mercado Modelo, in order to reach the ferry boat. The boat trip cost little more than two reais. We did not need to wait too long, the boat was waiting for us, to depart.

The ferry, pained in blue, bobbed calmly on the tiny waves. Some among us, and Carol was one of them, were not really feeling comfortable during this trip. They really hoped that there would be no higher waves; they wanted to prevent seasickness at all price. We stayed on the deck, near the railing. For me and Miriam, this location was ideal for making pictures. We took images of  the city of Salvador that we were leaving behind us, and of the island in front of us. It was cloudy, threatening dark clouds that could release their water drops at any time. But we kept it dry during the ferry trip. It took some time until the diesel engine was started. It made some choking noises, but it was healthy enough to bring us to the island. About thirty minutes after boarding, the ferry left the quay in Salvador, and started the 14 km trip. It was as if we were moving eastward, towards the African coast, on open water, but Itaparica Island is located within a bay, Baia de Todos os Santos, west from the city of Salvador..

We passed the fortress of St. Marcelo, which loomed like an island off the coast. We observed fishermen in self-made canoes; it was as if we were in a romantic setting of a movie. That provided me inspiration to take pictures in the style of Leonardo di Caprio and Kate Winslett, the famous scene on the railing of the ‘Titanic’. I already had taken a picture of Simone and a local boy as the romantic ‘Titanic’-couple, and I made another picture of Miriam, in a thoughtful pose. I used these, and a dozen other pictures, in a music video, with the theme music of the ‘Titanic’.

The boat continued its way towards the island, leaving a small trace of foam behind. Sometimes the ferry bobbed a bit more, which generated some panic among some of us. They were surprised that I did not have problems with the movements of the boat. But it is not illogical, since as a Dutchman, I must have inherited some navigator’s blood.. However, a large part of the Brazilians also must have inherited some navigator’s blood, from the adventurous Portuguese navigators… 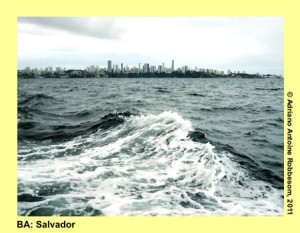 We left the skyline of Salvador behind us. Not much later, the contours of Itaparica Island doomed in front of us. A small church was one of the taller buildings near the mooring. A little more than forty minutes later, the ferry slowed gradually and was navigated cautiously along the reefs. There were numerous poles with fishnets attached at them. A little field, was marked on the beach, by ribbons. A dozen of teenagers were playing soccer. The group sighted of delight when the ferry was anchored, and that they could feel the solid earth again. Also Carol seemed to be delighted. Fortunately, nobody was seasick, the little waves had behaved themselves…