Experiences of a Dutchman living in Belo Horizonte, since December 2004, from month to month.
October 2006, part 2: Music rhythms, Children’s Day, and the day of the Brazilian patron saint. 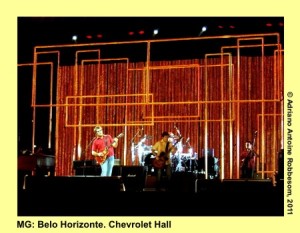 October was not only the month of the stars, it became also a month of music. Early October, I went to see a concert of one of the most famous rock bands in Brazil: Skank (pronounced as ‘skahnkie’). An obvious name for the band, since ‘skank’ not only refers to a kind of dance that is linked to ska or reggae music, but also to marijuana or a promiscuous girl. However, belohorizonto Samuel Rosa and his band are known to abstain themselves from drugs. The band was founded in 1991 and now enjoys a huge popularity in Brazil. Their music style varies from rock to pop to reggae, with blends of Brazilian styles such as forró and baião. With my student card, I was admitted to their concert in the Chevrolet Hall with a half-priced student ticket. Besides their routine songs, the band introduced songs of their new album; their concert lasted more than two hours. Not surprisingly, they also played their most popular song: ‘Garota Nacional’, which is freely translated as ‘Brazilian girl’.

The (amusement) parks were crowded with
children and their parents

I did not only listen to the music of Skank. Less than one week later, there was a festival in Parque Municipal, the city park. Again I entered with a half-priced ticket. This festival was sponsored by one of the Brazilian mobile telecom providers, Telemig. A few years ago, this company was integrated into a larger company: Vivo. Near the Francisco Nunes Theater (designed by architect Oscar Niemeyer), a large stage was set up, and large canvas covers provided protection against rain showers. That night, I enjoyed various music rhythms from the state of Minas Gerais. For instance, a folkloric group from Almenara, form a region near the Bahian border. Later that night, the rhythms changed completely, from folk to pop to hardrock.

Washington, who introduced me to the unforgettable travel to Salvador, had obtained two free tickets for another concert, in the third week of October. This concert was held in the more luxurious Palácio de Artes, next to Parque Municipal. That night, a CD would be presented and the contents would be played by a military orchestra. We took seats on the balcony, from where we had excellent view of the stage. See, the chairs on that stage became occupied by members of the orchestra of the military police of the state of Minas Gerais. Their repertoire consisted of the (inevitable) Brazilian national hymn, and hymns of various corps: navy, air force, artillery, cavalry, fire brigade (‘bombeiros’). The music was accompanied by locally known singers. The final act was the unofficial hymn of Minas Gerais: ‘Oh Minas Gerais’ (analogue to ‘Viene Sul Mare’). There was a reception after this music presentation. Washington and I joined the reception, where beer and wine flowed until dawn. 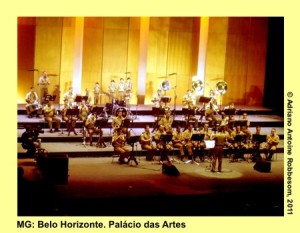 October 12 may be considered as the most important day in Brazil, and other important days in Brazil are 24 December (Christmas Eve), 31 December New Year’s Eve), 7 September (Independence Day), and 15 November (Proclamation of the Republic). October 12 is the day of Nossa Senhor Aparecida, Our Lady of Apparition. The legend tells that on this day, a headless wooden statue was found by fishermen. Not much later, the also found the head. They then caught a lot of fish. Thanks to this miracle, Nossa Senhora Aparecida is the patron saint of Brazil, and many believers visit the churches to personal or jointly prayers. Processions take place throughout the country. Fireworks are ignited at noon, at the presumed time of the encounter of the statue, about 300 years ago. 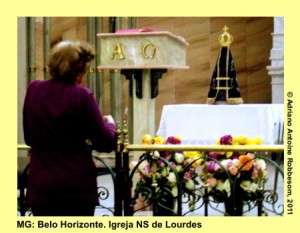 Churches became crowded by believers for
their personal or joint prayers.

It is also Children’s Day on 12 October. The children receive lots of presents, and will go to amusement parks, zoos, and swimming pools. Various activities are organized for children. From the second week of August, after the celebration of Brazilian Father’s Day, toy stores and warehouses are decorated in the style of Children’s Day. Heaps of toys are waiting to be bought. In Brazil, the stores and shopping malls are changing their decorations roughly every two months: Carnival in February, Easter in March-April, Mother’s Day in May, Valentine Day in June, Father’s Day in August, Children’s Day in October, and Christmas in December. One day after Children’s Day, the stores are rapidly changing their decorations in enchanting Christmas decorations. People may enjoy these Christmas decorations for about 1-2 months. 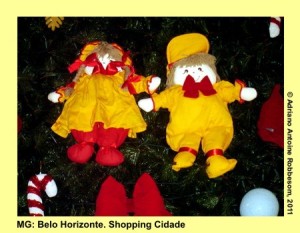 Extra: two photographs of the Botanical Garden in Belo Horizonte: 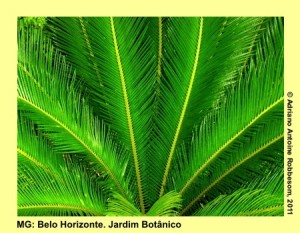