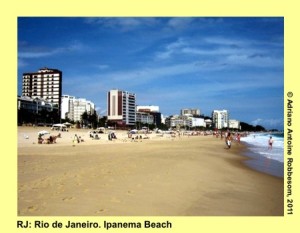 There are not many skyscrapers along
Ipanema Beach, compared to Copacabana Beach

Ipanema Beach is a totally different beach than Copa(cabana) Beach. There is at least another atmosphere. There is a more mundane atmosphere in Copa, probably due to the many luxurious  hotels along the boulevard; in Ipanema the atmosphere is a bit more relaxed, more animated. Maybe this is due to the presence of street artists and to the reputation of ‘Posto Nove’, were many people of the LBGT movement gather. Ipanema Beach is a natural postcard image, with the two peaks of ‘Dois Irmãos’ in the background. The famous favela (slum) ‘Rocinha’ is located behind. Under clear weather conditions, the cross shape of Cristo Redentor is visible on top of the Corcovado mountain. We had stayed on Ipanema Beach until sunset. We were surprised that some beach goers applauded when the sun was set behind the two peaks. A spontaneous gratitude for another sunny, wonderful beach day. We kept ourselves a bit quiet at night; we wandered along the streets in Ipanema, and along the long avenue in Copacabana.

My second day in Rio started with a morning on Copacabana Beach. After lunchtime, we took the bus to downtown Rio. My two travel companions wanted to visit two cultural centers. One was the Cultural Center of Banco do Brasil, with an exhibition about artist Aleijadinho. The other was the Cultural Center of Correios, with exhibitions of contemporary artists and designers. For me, the exhibition about Aleijadinho was really interesting. This famous Brazilian Baroque artist was even able to produce masterpieces when he suffered malformations of his hands and feet. In various cities in Minas Gerais, many of his works are found, predominantly in and around churches. Unfortunately, it was not allowed to take pictures of that exhibition.

One spelling error that is clearly
obvious….

After having absorbed these cultural impressions, we made a walk in downtown Rio. There were many people in the street on this Saturday. We followed these people and ended in a labyrinth of narrow streets with numerous small stores. The streets were decorated with red and green ribbons, Christmas colors. There were red carpets on the pavements. We were in SAARA, the famous shopping center in Rio. SAARA is a retailers association and has nothing to deal with the large desert in Africa. But you may consider it as a shopping oases in the city center. The narrow streets were very crowded. The little stores offered a surprising variety of merchandise. There were not only clothes and electronics. You will find this kind of merchandise in the wider and more modern shopping streets. Here in SAARA, there was much more variety, every store had something special, and maybe that’s why SAARA is very popular, especially during the weeks before Christmas. 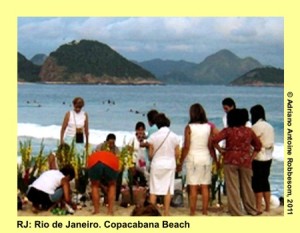 Our third day was spent on the beach, partly on Copacabana Beach, and partly on Ipanema Beach. We took some rest, we wanted to be prepared for the music festival later that night that was held because of Human Rights’ Day. The festival was held on the enormous city park of Aterro de Flamengo. The first artists were locally known samba musicians who played their music of decades ago. Later that day, more famous and more interesting artists appeared on stage. Nationally known artists like Fernanda Abreu, Sandra de Sá, Gilberto Gil. Highlights of that night were the shows of Olodum from Salvador, and of Monobloco from Rio. The fans had waited for their performances and sang loudly with them. There were also loud cheers when the death of Chilean dictator Pinochet was announced. There were also sounds of protest, against the use of the caveirao: a blinded armored vehicle that is used by special police forces, BOPE, in their actions against criminals and drug gangs in the slums. For us, it was a night to remember.

The performance by Olodum was one of the
festival highlights

Funny to read the name of my birthplace in Rio.