(Click here for all episodes of ‘Rio de Janeiro’)

Sunday morning or not, we had to get up early. It was that early, that even the breakfast service of the hostel was still busy to prepare the breakfast buffet, including heating milk and making fresh coffee. Because we were quite hungry, we decided to wait a while, until the breakfast was ready. We almost devoured our breakfast. At eight-thirty, we left the hotel and walked to the bus station, about five hundred meters away. The buses services had a Sunday schedule, and we therefore had to wait quite a long time for our bus. It took about thirty minutes before we entered the main entrance of one of the most beautiful botanical gardens that I have seen in my life. Jardim Botânico in Rio de Janeiro.

We passed the pay desk at ten. The entrance was three reais, there was no discount for students. Together with the entrance pass, we received the map of the garden. Everything was numbered on this map, the numbers corresponded with explanatory text next in the margin. More than sixty numbers, we had to walk and to see a lot. We quickly looked on the map, and planned an efficient route. We couldn’t stay too long in the garden, since there was another activity planned that afternoon. Near the entrance, there was a group of brownish yellow statues representing people dancing in a circle. Thy appeared indians, maybe they were the original inhabitants of this region. It was a fascination group of statues. Next to the statues was a small coil were some turtles were lazily swimming around. Other turtles just enjoyed the warm sun. 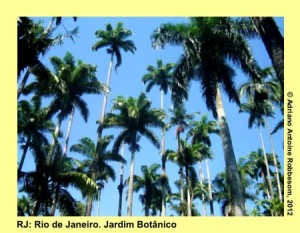 A double row of very high palm trees drew our attention. This double row was planted in the center, and is part of the logo of the garden. These palm trees appeared to be the highest I have ever seen, more than twenty meters. Our first goal was to visit the Japanese Garden. I have seen other Japanese and Chinese gardens before: in the Netherlands (Haaren, Leiden, and Clingendaal), in Germany, in the United States (San Francisco). I always enjoyed these colorful and peaceful gardens, and I have tasted the unique mix of Japanese art interwoven with natural elements. Inevitable are the bridges, the waterfalls, the bonsai trees. These elements were also found here, in Rio. There was a plaque at the entrance of this garden, commemorating the visit of the Japanese crown prince and his wife. Now a group from Belo Horizonte visited the garden, but our visit won’t be commemorated…

We approached a little pond that was covered with large water lily leaves. A little red bridge connected two ponds with each other. We noticed a waterfall that was constructed from bamboo stems. One filled the other, who served as a balance, with running water. Due to the weight of the water the other stem fell down and emptied the water into the pond. And returned to its original position, to become filled again. Unfortunately, it was not the flowering season of various Japanese plants and trees, which might enrich the garden with their enchanted colors.

We left the Japanese garden behind us. In front of us was a rosary. The roses hadn’t started yet to flourish. Only few roses were flourishing, the others were still rosebuds. As if they were too shy to show their natural beauty. The shameless roses spread a wonderful perfumed fragrance. The fragrance enlightened our minds. We noticed the high Corcovado rock, with Cristo Redentor on top of it, at the horizon. It was my dream pay a visit to this colossal statue. This dream became fulfilled in the following travels to Rio. 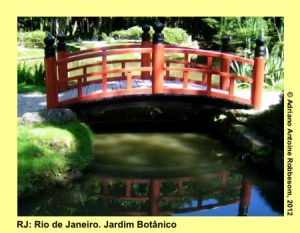 The sky was deep blue, with only a few clouds. It was really enjoyable to wander through the botanical garden. We wandered through a fragment of Amazon forest, with some huge trees. We walked along various palm trees; I was amazed by the large variety of palm trees, more than I could have imagined before. We passed the bromelia greenhouse that was closed due to renovation. We halted at an colorful exhibition of orchids, in another greenhouse. This greenhouse was open. We were amazed by the colors of these queens of the flowers. Pink, white, red, orange, yellow, purple, green. A lust for our eyes. And beloved by many photographers, including me.

There was a classic fountain in the middle of the park. Near this fountain was a monument honoring one of the most famous and influential musicians in Brazil: Tom Jobim. The wooden monument contained a plaque with the name of the late composer. Two giant trees caught my eye, but they were relatively small when compared to the world champions among the trees: the sequoia trees that I have seen in California.

One of the principal trees in the garden was the tree that gave the country the name: pau-brasil. It is not a very tall tree, but it expressed such an energy that you feel enlightened. The reddish brown bark is in sharp contrast with the lush green leaves. We had to end our visit, which was short and intense. We almost had run our route, in less than two hours. It was about time to return to our hotel. We would participate another activity that afternoon: the climb of Morro da Urca, the mountain next to the famous Pão de Açúcar.