Destination São Luís, capital of the state of Maranhão.
Images of the local markets in São Luís. These images were made without flash. 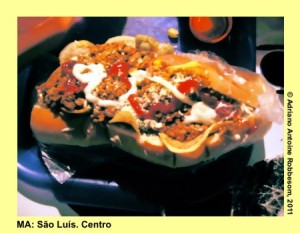 We left the Convento, where we enjoyed Festa Bumba-meu-Boi, around midnight. But our night wasn’t over yet. We stayed a while around the Convento. We wandered along the barracks, and then returned to the center, to Rua da Palma. By accident, we encountered a barrack (it was a rebuilt Volkswagen van) where delicious Brazilian hotdogs were sold. In Brazil, they are called ‘cachorro quente’ the literal translation of ‘hotdog’. While the American snack is nothing more than a Frankfurter wrapped in a bread roll, with some ketchup, mustard, or mayonnaise, the Brazilian hotdog is completer. The hotdog here in São Luís was very complete: a bread roll, sausage, sauce of cooked tomatoes, added with some peas, corn kernels, grated carrots, some cooked paprika, potato fries, green olives, some minced meat, Parmesan cheese, and some ketchup, piccalilli, or mayonnaise. We had to pay 2.50 reais for that, about one euro only. It had a delicious taste. 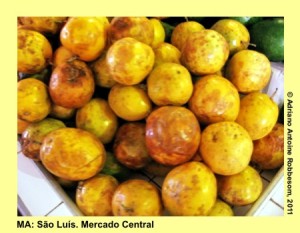 We continued our walk through Rua da Palma. The Hot Dog King already had informed us that we might meet good reggae music in some side street. We didn’t hesitate and walked in that direction. And indeed, there was a local reggae band playing on a small stage on a small square. São Luís, Brazilian capital of reggae! We took our seats, on the white plastic chairs. Soon the waiters arrived with ice cold beer. We stayed there until four am, while we enjoyed live music and beers. We arrived at the hotel at five am….

We couldn’t enjoy too long our mattresses. I had already agreed with a friend and his aunt to join them to the local mercado central. I had to keep my promise. But the aunt was not feeling very well, she preferred to stay a bit longer in the hotel. Her nephew wanted to visit the mercado and I joined him. He also had spent the night at the reggae square, and he had drunk much more beer than I did. He appeared at the breakfast table, with tiny eyes, and he had to take a lot of coffee. At about eight-thirty, we were on the way to the market, for a walk of about thirty minutes. The Central Market is located just outside the center and is a repository for daily food ingredients. From vegetables and fruit to meat products and candies. Experienced travelers who already have visited such local markets in Portugal for instance, may have a good idea of how the market in São Luís must look like.

Various vegetables and fruits were exhibited on large piles. A lot of red, green, and yellow. Leaves, beans, yardlong beans that are not common in Southeast Brazil. Tomatoes, with a characteristic egg shape, cherry tomatoes, which are very popular in salads. Melons that had a bigger size than my head. Maracujás, which we only know in the Netherlands as a fruit juice. Hundreds of kilos of bananas. the banana trees grew abundantly there.
Large baskets full of big and little shrimps, they had been peeled professionally. They seemed to be delicious, and they tasted really fresh. Fresh fish, big marine fish that were cut in big slices.
Complete sucklings, hanging on a hook. Big hunks of beef, recently cut, and still bright red. Intestines from pigs and cattle, stomachs, livers, kidneys, lungs. Big trays full of a mix of meat for the famous Brazilian feijoada: with calabresa sausage, porcine heels and ears. For the feijoada lovers. 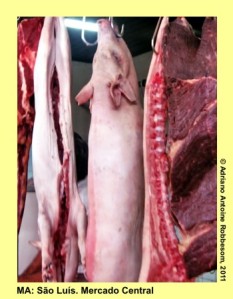 We took our time to wander along the numerous barracks. I kept my camera hidden, in order not to attract much attention. I wasn’t afraid to become robbed, but I didn’t want to attract attraction of the marketers. We more or less stayed anonymous, even when these marketers already had noticed us, and had been thinking that were were tourist from the south. I didn’t use the flash of my camera, but I had to halt regularly to obtain sharper images. The nephew already was familiar with my reputation as a photographer, and he cooperated to halt next to me, when I took another picture. We didn’t stay that long in the market, no more than forty minutes. We still had to see and enjoy much more of São Luís.

A freezer with:”God is Faith” and “Exclusive
property of Jesus”.

A wheelbarrow of bananas…