Destination Rio de Janeiro, the second travel to the former capital of Brazil.
A breathtaking view of Rio de Janeiro, and a tropical Santa Claus on the top of Morro da Urca.

(Click here for all episodes of ‘Rio de Janeiro’)

Botafogo Bay with Corcovado on the horizon

Our climb to the top of Morro da Urca was ended, we had arrived at the cable way station. From there, two cable ways link Morro da Urca with Praia Vermelha and Pão de Açúcar. A guardsman watched the plateau. We had some discussion with him, before we were allowed to enter the plateau. There was a music hall on that plateau. A show was planned that night, a show that had to deal with Christmas, for all ages. Many employees were active: adjusting the sound, light effects, rehearsals. Some of us couldn’t resist to enter the music hall, to witness such a rehearsal.

I was not interested in these rehearsals. I was more fascinated by the breathtaking views of the city of Rio, the Guanabara Bay and faraway Niterói. I walked along the rim of the plateau and took pictures. Vítor allowed us ninety minutes to enjoy ourselves here. For me, it was just enough to enjoy the miniature world beneath me. It was sunny, with some little clouds on the horizon. Now I became aware of the big size of the city of Rio, en even from this plateau, not everything of Rio could be observed. Numerous skyscrapers against the green hills. The tiny white lines of the beaches of Botafogo and Flamengo. Apparently small boats floating in Guanabara Bay. Long grey lines of landing strips on an island. And a beautiful view of nearby Pão de Açúcar rock. 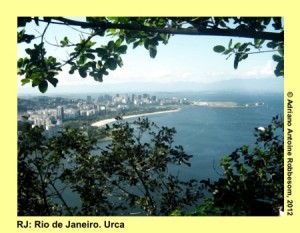 View of the center, and the airport (right)

There was music. But the music didn’t come from the music hall. I neared the source of this music. About thirty meters away, a choir was singing Christmas carols. A real Santa Claus stood there next to them. The big-bellied Santa wore his traditional red costume, with white fur at the ends. He had a white beard and wore black boots, and a red hat. He was holding a staff in his hand. He stood there, relaxed, and allowed photographers to take pictures of him. Santa Claus in Rio. In a wintry outfit, in the tropics! It must have been thirty degrees at that time! I noticed that Santa was indeed sweating a lot…

Singing on the top…

It was almost six pm, when Vítor called us. We had to leave the plateau at that time, in order to allow the artists and the guests – who were paying a lot for the entrance fee! – to enter. We started to descend. As usual, going down was much easier than climbing the same track. We were a bit in a hurry, in order to arrive that the base before dusk. But I was able to tape some pictures. It took us less than half an hour to arrive at Praia Vermelha again. The climb lasted fifteen minutes more…

We had to wait patiently for the bus service to Copacabana. The day was not over yet. It was expected to return to Belo Horizonte at ten pm. Our teenage girl Anita told us that she wanted to visit the beach once more again. We decided to walk to Ipanema Beach, to witness the sunset. We arrived just in time. At seven-thirty the sun made the way to the horizon. The sky became red, orange, purple. At eight, the strong lamps of the lampposts along the boulevard were lit. It was the end of my second travel to Rio de Janeiro… 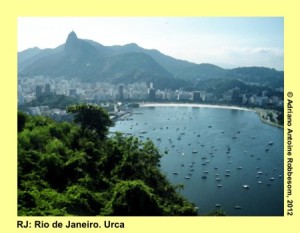 Ipanema Beach: the final sunny minutes of the second travel in Rio