The statues in front of the church:

The square with eight statues.

The sky blue and purple church was already worth visiting, but also the square in front of the church drew our attention. The square hosted eight statues that represent scenes about the life of Saint Joseph.

1. Marriage of  Joseph and Mary. 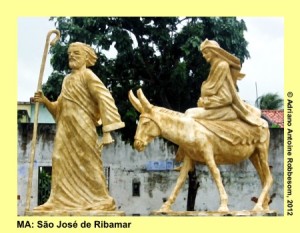