SALVADOR (50)
Goodbye to Barra and Salvador

Destination Salvador, capital of the state of Bahia.
The final day in Salvador: the shoe market, the slave cellars, and a final dive in Barra.

Less than ninety minutes after my arrival in the pousada, I opened my eyes, and started to dress myself. I was about to join Igor and Léo on their trip to Mercado Modelo and Pelourinho. For me, it was an excellent opportunity to explore this interesting region another time. Igor and Leo visited a shoe market, where shoes and sandals were offered for very low prices. I was already aware that the selection of the shoes and sandals would take considerable time, I left them at the market, while I was wandering around. I came at a square, which had a statue of a famous local poet. A prominent location in Salvador, with a good view of the Marina and the fortress in the All Saint’s Bay. A location that was suitable for taking many interesting pictures.

It took about thirty minutes before Igor and Leo had selected their shoes and sandals. We lacked time to enter Pelourinho, we only had some time left for a quick visit to Mercado Modelo. Igor still had to buy some souvenirs for his family, while Leo and I followed Igor’s advice to descend a staircase, to the catacombs of Mercado Modelo.  There was a lugubrious atmosphere. Faint yellowish green light shone on certain strategic locations in this enormous cellar. About some centuries ago, new shiploads of slaves arrived here. They left the ship and had to stay in the cellar until it was time for the slave market. The cellar was filled with water, that came from the bay. It was humid, the walls were covered with fungus. Concrete tiles allowed us to walk through the cellar, a cellar with arcs, and low walls. Slaves had lived here like rats, most probably between hungry rats. You don’t need much fantasy to imagine the harsh circumstances of slaves in this cellar….

This cellar left a deep impression on me, showing me the ruthless and inhumane behavior of slave traders who considered slaves as animals. At that time, black people were considered as heathens; according to the Catholic doctrine,  heathens were no more than animals. Therefore, black slaves lacked humane circumstances, slave traders didn’t care too much about black people dying in this cellar. Horrible!. 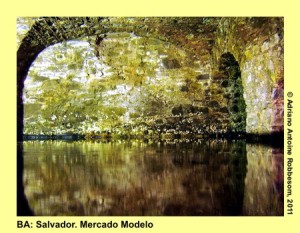 I hadn’t spent too much time in this cellar. the lugubrious atmosphere and the knowledge of the sad history didn’t make me feel comfortable there. Leo was also not feeling very comfortable. However, I stayed there long enough to take some pictures of the cellar. I returned there with Igor, and he told me more about the history of the cellar, about the circumstances of slaves living there. Igor had heard enough stories about this subject to retell them, with much emotion. In Portuguese.

We left Mercado Modelo, it was about time to return to the pousada in Barra. I quickly returned to the monument for more pictures, before Igor and Leo approached me by taxi. I joined them. The taxi driver drove fast, in little time we were back in Barra. Most fellow travelers already had packed their belongings, they were organizing their bags. Leo and Igor still wanted to return to the nearby beach for a short while, and I joined them. I already had my bags packed, and was ready to enter the bus. We walked to the beach. We enjoyed the sun, it was still warm. We walked on the beach and had another fresh dive in the water. Igor wanted a beer and ordered some cans. Suddenly, another fellow traveler joined us. She also preferred to enjoy the final moments of the day on the beach.

It was about time to return to the pousada, the time limit was surpassed, and according to my European way of life, I became impatient and urged Leo and Igor to hurry. But… Brazilians are never in a hurry, unless they are driving. Only one hour (!) later, they left the beach. We returned to the pousada, and took a quick shower. I also took a quick shower, according the Dutch standards: only three minutes. The two Brazilians took considerable more time for their shower: more than ten minutes each. We were still in the pousada. Finally, they were ready. Ready to take the taxi to our bus. The taxi brought us to the faculty were the bus was scheduled to leave. Most of the fellow passengers were waiting impatiently. Even Carol showed her disapproval that we arrived very late. But she wasn’t mad at us. She was more worried about the delay, and that the bus drivers might get tired too much. She was right in this respect… 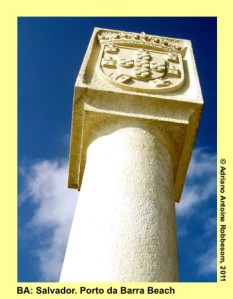 We collected our luggage in the cargo compartment, and took our seats. It was almost six pm. Again, I took my seat next to Edson, I had the same seat, likewise the start of our travel to Salvador. Carol sat behind me, and next to her sat Simone. The bus driver started the engine, we were on our way back to good old Belo Horizonte. This time, the bus driver know the route and we quickly left Salvador behind us. On our way back to Belo Horizonte, there were fewer stops. And there was no stop at a beach to spend the night there. We had to sleep in the bus. It was already dark, the students were lively again. Like nocturne animals. Ice-cold beer was distributed, the students danced, chatted, laughed, drank their beers. Like it was on our way to Salvador. Now we were about to return to our houses, our apartments, our comfortable beds, our work. Our holiday was coming to an end…