Destination Maceió, second travel to the capital of the state of Alagoas.
Boat trip from Praia do Gunga to Barra de São Miguel.

The anchored boat, waiting for us to arrive

It was still very cloudy when we were about to leave Gunga Beach by boat. Fortunately, it had stopped raining, I stored my umbrella in my backpack. The anchor had already been raised, but the boat was still waiting for us to board. Apparently, this shiny steel anchor was quite new. The staircase, which we had to climb to board the boat, was floating at a few dozen meters distance. One of the crew members had to wade through shallow water to grab the staircase and attach it to the boat. He attached it with a rope, with some characteristic sailor’s knots.

This man had the honor to drag the staircase
back to the shoreline.

On the way back to Barra de São Miguel, the boat didn’t approach the coral reefs. The hostess of the travel agency tried to entertain us with forró music, but only very few took the opportunity to dance on the boat deck, which was still wet. The majority sat in silence or chatted with their partners or neighbors. The return trip was quite fast, and we now were able to have a clear view of the shoreline, now it had stopped raining. We enjoyed the views of the green mangrove shrubs, the small dunes, the little houses and jetties. I was not the only one who took pictures during the boat trip.

A lot of green bushes along the coastline

About thirty minutes later, we arrived in Barra de São Miguel. We were welcomed at a local restaurant, where a buffet was waiting for us. Such a buffet is very common in Brazil. Many little and larger restaurants offer dozens of dishes during the Brazilian dinner hours: between 11 am and 2 pm. It was already 1 pm, when we entered the restaurant. We all were hungry. The dishes were neatly decorated and full of delicious food. Next to the inevitable rice, beans and chicken meat, there were various dishes with fish, seafood, pasta, and vegetables. A kind of a fish risotto was very popular. I preferred the dishes with fresh shrimps. Large-size shrimps, like gambas. Since not everyone liked this kind of seafood, I was able to put dozens of these shrimps on my plate. I also grabbed fresh, crispy bread with garlic butter. It was time-consuming to peel the shrimps, but they were delicious!

The warm meal, which included shrimps

About one hour later, Vítor made us gather at the entrance. We were about to travel to Pontal da Barra, to a little village in the southernmost point of the peninsula on which Maceió is located. According to Vítor, we really would appreciate this stop in Pontal da Barra. However, some of us became somewhat skeptical: ‘First see, then believe….’

Gunga Beach, with the coral reef on the horizon

The anchor had already been raised 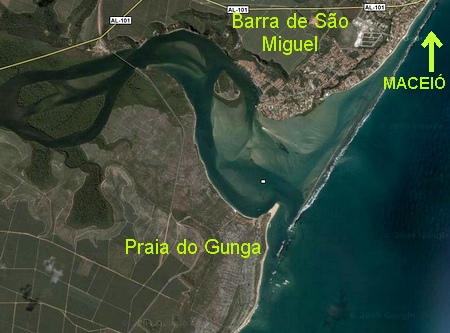