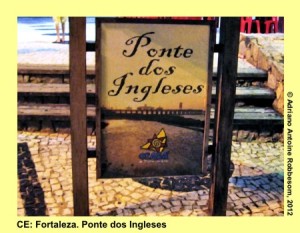 After a lazy day on Praia do Futuo beach, a group of students went to a festival where they stayed until dawn. They would sleep later, in our bus, when we were on the way back to Belo Horizonte. Others preferred to have a quiet evening in Fortaleza: they were too tired for more nightlife. Eilen, who accompanied me various times in Fortaleza, and I had another option: visiting Ponto dos Ingleses, one of the touristic attractions in Fortaleza. Apparently, an attraction that is mainly focused on foreign tourists. We took the bus that was heading back to the center and followed the directions of the cobrador (he is responsible for the bus fares). We had to cross a crowded avenue and walked in the direction of the pier.

Ponte dos Ingleses (Pier of the English) was a project, which had to improve port facilities in Fortaleza. The project was approved in 1920; in 1923, English engineers started the project. However, this harbor never was realized, thanks to shortage of fundings. The constructions were neglected, and gradually were destroyed by the sea. In 1994, the city decided to restore the 120-meter-long pier and to establish touristic facilities. At the pier,artists have their galleries, and scientists have an observation spot from where dolphins are observed. The English pier is also a favorite subject for local poets and singers. Not very surprising, since the pier is recommended as the best location in Fortaleza for witnessing colorful and breathtaking sunsets. 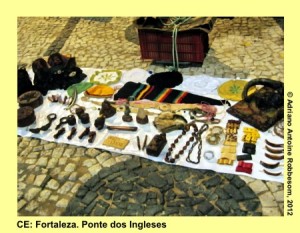 Artists offer their creations in the street.

We approached the first restaurants and bars near the entrance of the pier. There were various restaurants that offered expensive dishes: more than thirty reais (10 euros) for an à la carte dish. Undoubtedly, foreign tourists will prefer these exclusive restaurants. Brazilian tourists may consider the dishes as much too expensive. On the left, I observed something obvious: a well-known beer brand on a green background. That could only be Heineken Beer! More striking was the logo of a famous Dutch soccer team: Feijenoord Rotterdam. A Dutch bar! As if that wasn’t enough, his neighbor also had a bar with a Dutch name: Het Pintje (Glass of Beer). Maybe Dutch-speaking Belgians? The waitresses were anything but Dutch; they were Brazilian girls. Were they able to speak Dutch? Not at all! They only spoke Portuguese. 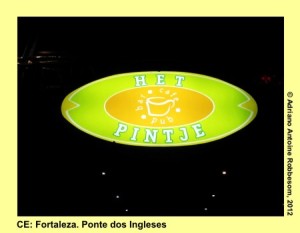 Eilen and I went on. We walked along restaurants, bars, nightclubs. There was even a long, neat  row of people waiting in front of a nightclub, where foreign tourists would meet Brazilian dance styles. The billboard announced them as folkloric dances. When reading this term, I immediately would associate that with traditional European folkloric dances, and absolutely not with sensual and rhythmic dances as samba, forró, pagode, frevo, to name some. Unfortunately, we were too late for the enchanted sunset, but we enjoyed the city lights very much. After a short visit to the art galleries, we returned to our PSOL pousada. Our final night in Fortaleza would be very short, but relatively comfortable on a thin mattress. Relatively comfortable, because the two following nights were spent in a riding bus, on the way to Belo Horizonte… 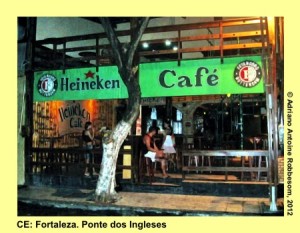 Waitresses of the Dutch bar 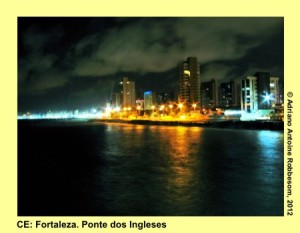 The beach and city at night