Destination Fortaleza, capital of the state of Ceará.
The bus travel from Fortaleza to Belo Horizonte went through the states of Ceará, Pernambuco, Bahia, and Minas Gerais.

We had to get up early. Already at 6.30, we folded our mattresses and zipped our bags. The bus drivers suggested to leave at seven, in order to be on time for the crossing of the São Francisco River, at the border between the states of Pernambuco and Bahia. We should arrive there before sunset. It was already seven-thirty when the final fellow travelers arrived from their night that was spent at a festival. Various famous Brazilian artists participated. These students were exhausted, but they were about to sleep in the bus. Everyone was needing extra sleep; only the bus drivers had had enough rest. They had enjoyed themselves in the city, and were ready for their task: to drive us safely back to Belo Horizonte. A bus travel that would last two entire days. 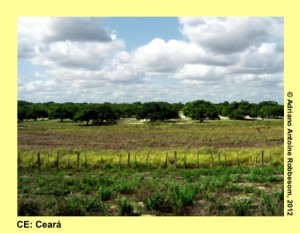 We left Fortaleza at twenty to eight. It was rather chilly that morning. It was about 24 degrees. Not long after, we would experience the intense heat of the ‘sertão’ (wilderness) of Ceará. This wilderness is almost completely deserted, thanks to the lack of rain. Since there is not much human activity, the sertão is known as rather dangerous. Especially at night, if I may believe the driver’s stories, when criminals rob various cars and buses. It is also dangerous because of the road accidents. Especially at night, when the motorist only can view the light emitted by the headlights of his car. The highways weren’t illuminated. That day, I noticed quite a number of provisional graves, even for more people of a family. Silent witnesses of many human dramas.

Before the start of this bus travel, I had thought that the sertão landscape must be very boring. Arid, dry, dusty, and devoid of plants and trees. Due to the lack of rainfall, desertification is going on. The Brazilian government had started an ambitious large-scale project to create transpositions from the long São Francisco River (almost two thousand km long!) in the dry northeastern part of Brazil.
I was wrong. The landscape was diversified, breathtaking even. The scarce green plants that fought to survive between dried bushes; brown grass burnt by the intense sun. Small wells, surrounded by spots of intense green. Like tiny oases. Randomly spread little farms, albeit uninhabited. The highway went from Fortaleza to the margin of the São Francisco River, at the border with Bahia. We crossed the state of Ceará, entered for some kilometers the state of Paraíba and some more kilometers the state of Pernambuco. That day, I took more than 1500 pictures. Below and in the following episodes a small selection: 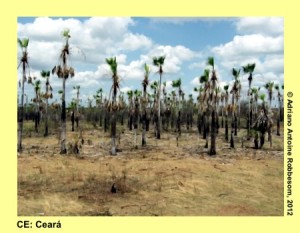 One comment on “Travel in Brazil: Bus travel FORTALEZA – Belo Horizonte (01). Landscape in Ceará I”