MARANHÃO (37)
A walk along the ruins in Alcântara (III)

Destination São Luís, capital of the state of Maranhão.
Rua de Amargura, in the historical city of Santo Antônio de Alcântara, on the Alcântara Peninsula.

On a Sunday morning, a catamaran carried us to the other side of Baía de São Marcos, a distance of more than fifty km. On the peninsula is the historical city of Santo Antônio de Alcântara, a large open air museum.

Bela Vista: On cloudless days, the skyline of the
city of São Luís is visible from here.

Behind the Matriz, a road followed the coastline: Rua de Amargura. Literally translated as Street of Sadness, or Street of Sorrow. A lurid name change for a location which once had the idyllic name Bela Vista: beautiful view.

Ruïn of a mansion that belonged to a aristocratic
family.

The story goes that, on this location, the wealthiest aristocratic families had their mansions constructed, on the location with the most beautiful view of the peninsula. The pelourinho was located here. The castigation pillar, where many slaves had to endure torture, castigation, deprivation of food and water. Either under the scorching sun or during heavy monsoon showers. A lurid example for the others, to scare them to await the same fate as the condemned. Much later, the pelourinho was moved, thanks to suggestions of a former slave, to Praça de Matriz.

The name ‘Rua de Amargura’ also appears to refer to other events, that have to deal with human drama. Children of aristocrats were sent to Lisbon, capital of Portugal, in order to study there. The boat trip to Portugal was a real adventure and full of danger. Many ships had suffered heavy storms or even shipwrecked. From this location, mothers of these children were able to watch their children go on board, and, much later, to see them go off board again, when they were fortunate… 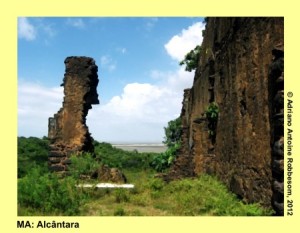 Once they were prominent mansions… 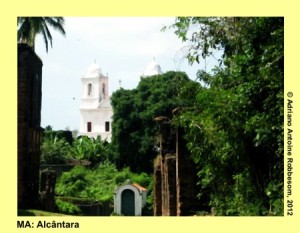 At the end of this dramatic road is a small chapel.
Background:Igreja Nossa Senhora do Carmo.

One comment on “Travel in Brazil: MARANHÃO (37). Alcântara, an Open Air Museum – III”