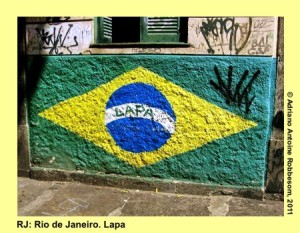 The cultural festival was near Lapa,
cultural heart of Rio.

In the second week of January, I received an invitation to join students in their participation of a biannual student cultural festival. The so-called Bienal de Arte e Cultura da União Nacional dos Estudantes. We had our lodgment in a faculty building of UNIRIO in Urca. This university was quite far from downtown, where the cultural events were held. Therefore, the organization had arranged free bus transport for us, day and night. Most students had carried their tents, which they set up in the lecture rooms of the faculty. One of the students had carried a mattress for me, which I used during that week. 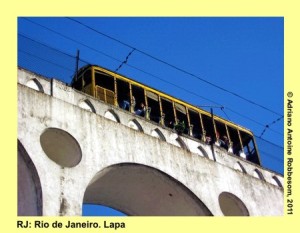 One day, our group ‘leader’ Jader had a bright idea. He suggested to walk from Urca, along the beaches of Leme, Copacabana, Arpoador, and Ipanema to Lagoa da Freitas. Frejat, who was singer of the Brazilian band Barão Vermelho (Red Baron) would give a free concert that night. Only recently before this concert, he had started a solo career and in order to gain some publicity for his new musics, he gave some small-scale concerts. Who is quite familiar with Rio, knows very well that Urca-Lagoa is a respectable distance, about ten kilometers. We enjoyed the one-hour free concert by Frejat, and walked back the entire distance, at night.
We also saw various cultural events of the biannual festival. Dancing demonstrations, theater acts, and music try-outs. We were there during music nights with Black Music, Afro Music, Funk, Samba, and a performance everyone was waiting for: the show by one of Brazil’s most popular bands, Lenine. Singer Lenine was scheduled to start the show just after midnight, but there was much delay. It was already three am,when Lenine started to sing. Everyone sang and danced with his well-known songs and lyrics. It was already five-thirty when we took the bus to our lodgment in Urca. 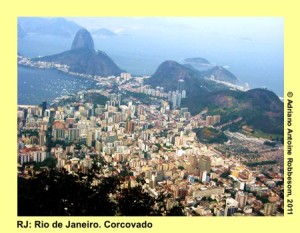 Our lodgment was at the base of the Urca
mountain, next to Pão de Açúcar (Sugarloaf)
Mountain.

Jader was very familiar with the city of Rio, he was proud to show that. He really enjoyed being capable to guide us to locations and attractions which are far less known to tourists. He was the one who showed us the walking path to the top of the Corcovado, and he guided us with the long walk from Urca to Lagoa. One evening, he guided us to a rehearsal of one of the most famous samba schools in Rio: Mangueira. He warned us to be very careful, because it was expected to be very crowded. And there might appear people that might take advantage of the huge crowd and try to rob them. Indeed, it was very crowded, but Jader had no big problems to guide us to vacant seats of the huge grandstands of the Sambódromo. The Sambódromo is the location were the carnival parades by the samba schools take place during two consecutive nights. These parades are broadcast by Brazilian and international TV stations. The bateria (percussion band) started to play a thrilling rhythm, when the dancers, with their colorful outfits, appeared and danced their best samba. We really enjoyed watching this marvelous show. 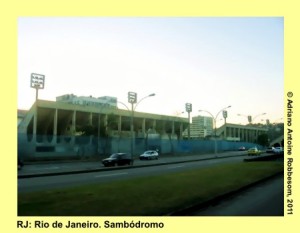 Sambódromo late in the afternoon

There weren’t only concerts and demonstration dances during the cultural event. There were also many debates, public lectures, and discussions with politicians, professors, and artists. Sérgio Cabral, governor of the state of Rio, was there, and singer/Minister of Culture Gilberto Gil. There were special meetings for the so-called LGBT (Lésbicas-Gays-Bissexuais-Transsexuais) movements,which mainly discussed about emancipation. I haven’t attended any of these meetings or discussions. However, I had attended a particular meeting in which we had to stand in a large circle, and hold each other’s hands, in order to form a closed circle. A young woman, in a long blue dress, started with a monotonous song, some among us started to sing or hoffersum with her. There were offers of roses, essences, and small objects. Rituals for Iemanjá, the candomblé goddess of the oceans. Because it was her feast day, on 2 February. At Praia Vermelha in Urca, many paper boats were released in the water, some of these tiny boats carried a burning candle. Roses were thrown in the water. Whether it is superstition or not, for me it appeared as a beautiful happening. 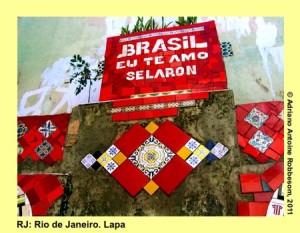 The tile artist (born in Chile) loved his new
country.

We already had returned in Belo Horizonte, when Carnival started to control Brazilian life. The parades in Rio and São Paulo were to be followed on tv all night long. At day, I went to the university, in order to continue my efforts to finish a new version of my thesis. I had received  long list of proposed suggestions and corrections, and it cost me much time to have these mutations adapted systematically. At that time, I really couldn’t have imagined that I would definitely defend my thesis only three years later. To put an end to my PhD time, after twelve years…

Experiences of a Dutchman living in Belo Horizonte, since December 2004, from month to month