(Troubadour). The word is probably derived from Latin (trobaire: poet). Every troubadour (or minstrel) is a poet, but not every poet is a troubadour. The ‘trova’ is a ballad that consists of four rhyming strophes. The verses were sung around since the Medieval Ages by troubadours or minstrels. In 1950, a cultural movement emerged, that reflected upon the trova: “Trovismo”. This term was invented by poet/ politician J. G. de Araújo Jorge and by poet Gilson de Castro, better known for his pseudonym Luiz Otávio (18 juli 1916-1977). In 1960, their dream became true: The foundation of an official union (União Brasileira de Trovadores) and their work “Os Primeiros Jogos Florais”. Luiz Otávio was honored as the “Prince of the Brazilian “Trovadores”. In 1980, neotrovismo emerged, by the foundation of the “Clube dos Trovadores Capixabas” by poet Clério José Borges: a new boot for Trovismo. At present, more than 3000 trovadores are active in Brazil; their symbol is the rose, their patron saint is St. Francis of Assisi.

Humberto was a military officer, and was colonel in the Brazilian Expeditionary Force that battled in Italy during the Second World War. We was appointed as chief of the army staff by president Goulart. He was one of the coup members that ousted the same Goulart in 1964. Two weeks after the coup, Humberto was sworn in as the new president. During his mandate until March 1967, all leftist parties became dismantled. The Brazilian airline company Panair (part of Panam at that time) had to end the activities, and Varig took the position of national airline carrier. Shortly after his resignation as president, he was killed in a plane crash in Fortaleza. It remains unclear whether this plane crash was an accident or not.

1841
Coronation of D. Pedro II as emperor of Brazil.

Pedro de Alcântara João Carlos Leopoldo Salvador Bibiano Francisco Xavier de Paula Leocádio Miguel Gabriel Rafael Gonzaga de Bragança e Habsburgo, is the complete name of Dom Pedro II (1825-1891). In 1831, his father, Dom Pedro I, abdicated, after fierce protests of the Brazilians against his inability to govern Brazil and against his participation in the Portuguese Civil War (Pedro was king Pedro IV in Portugal). Following his abdication, Pedro’s daughter Maria ascended the Portuguese throne at the age of fifteen. At that time, little Pedro was only five. Regents governed Brazil until 1840, when the Brazilian parliament judged 14-year old Pedro old enough to govern Brazil. This motto was ‘União e Indústria, “Union and Industry”. He guided Brazil into the industrialist period. Pedro II governed no less than 58 years, until the military coup in 1889. Two years later, he died in Paris, where he lived in exile. His body was later transferred to Brazil, and he now is buried in Petrópolis. 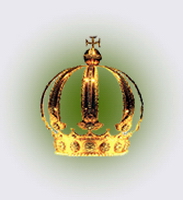 1821
Annexation of Banda Oriental (future Uruguay) by the Portuguese.

Banda Oriental was added as the province Cisplatina to the Brazilian colony. The Uruguayans battled for their independence for 19 years. In 1811, Southern American Liberation Wars were in full progress, the Uruguayan hero José Gervasio Artigas (1764-1850) battled together with the Argentinians against the Spanish rulers and defeated them. José returned to Uruguay (then called Banda Oriental, after the eastern margin of the Uruguay River), where he started the siege of Montevideo. The Portuguese, in turn, invaded Banda Oriental, but the city was spared. Artigas became leader of the people of Banda Oriental, that joined the Federation of River Plate (future Argentina). The Portuguese invaded, secretly agreed by Argentina, Banda Oriental in 1816. Artigas lost the battle against the Portuguese, and exiled himself to Paraguay. Following the annexation in 1821, revolutions broke out, until the nation declared itself independent in 1825. Together with Argentina, the young independent country Brazil fought a 500-day war, until the ratification of a treaty in 1828, confirming the independence of Uruguay. 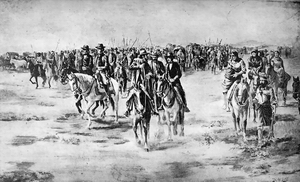 source
The country was almost completely deserted
for a short time, because of the fights.

At the age of 16, Pelé entered the Brazilian national team. In the match against Argentina, Pelé scored, but Brazil lost 1-2. At the age of 17, Pelé won his first World Cup. He participated in four world cups (1958-1962-1966-1970), but did not win in 1966. His ultimate match in Maracanã was witnessed by almost 140 thousand spectators. They pleaded him to stay. Pelé was very nervous before this match, and did not score. He was very emotional when he was substituted. Pele played 115 times for the national team and scored 95 times. Obviously, he did not win the Copa América. His ultimate match as professional was in 1977, during a match between New York Cosmos and Santos. 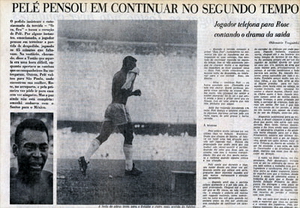 ‘Pelé was considering to continue in the second half’

1892
Creation of a Bacteriological Laboratory in the state of São Paulo, by Lei nº 43.

The Instituto Bacteriológico e o Laboratório de Análises Químicas e Bromatológicas was the precursor of the renown Butantan Institute. French scientist Félix le Dantec was the first director. After six months, he was succeeded by Brazilian scientist Adolfo Lutz. The institute managed to control epidemics of cholera, yellow fever and bubonic plague. The Butantan Institute was created in 1901.

1959
First appearance of the dog Bidu as a comic in the jornal ‘Folha de São Paulo.

The dog, inspired upon a schnauzer, was created by cartoonist Maurício de Souza. The cartoonist later became famous with his creation of ‘Turma da Monica’. 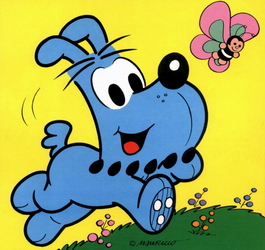 Gilberto is widely known for his anthropological studies of races and cultures in Brazil. His best known work is ‘Casa Grande & Senzala’ (The Masters and the Slaves), about the black heritage in Brazil.

1913
Introduction of four time zones in Brazil, by law.

From east to west, Brazil measures more than 4300 kilometers. In 1884, it was decided, after a meeting of 24 countries, to introduce time zones. The time zones divided the states of Pará and Amazonas in two time zones. In 2008, these divisions disappeared, following slight adaptation of the time zones. Since 1931, Brazil has summer time from October to February. Also in 2008, it was decided that the southern Brazilian states will have a summer time from the third Sunday in October until the third Sunday in February. In 2011, Bahia joined this group of states.

Luís received the title because of this peaceful approach to bring Maranhão back under central control. 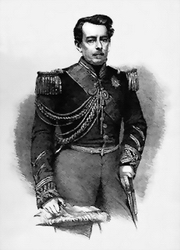 This group of German colonists arrived as a result of an imperial program to colonize Southern Brazil. They arrived in the then called Province of São Pedro, and continued their travel to São Leopoldo, where they arrived on July 25.

1847
Death of Bento Gonçalves (Leader of the Farrapos Revolution).

Bento was born in Triunfo (RS) in 1788. He is considered as one of the most important people in the history of the state of Rio Grande do Sul. Bento, together with Antônio de Souza Neto and Italian freedom fighter Giuseppe Garibaldi, fought in independence war (1835-1845) against the Brazilian Empire. The revolutionaries (farrapos or raggamuffins) were defeated, and peace was offered by Luiz Alves de Lima e Silva, general of the imperial army (see above). In return, the farrapos chose Luiz as their state president.

The money – now worth about 15 million euros – was the so-called ‘caixinha’ of the corrupt activities of the ex-governor. Planning of the robbery was worked out in deep detail, and participated by 13. Dilma was linked to this rebel group. The money was transferred to a Swiss bank account, and was used for financing movements against the dictatorship. See also the articles of IstoÉ and brasil247.