Boa Vista, ‘BV’ in short, is the capital of Brazil’s northernmost state Roraima; the city is located north of the equator line. The city, which may be considered as a modern urban surprise in the Amazon, started with a fazenda, and with the discovery of gold and diamonds, Boa Vista expanded significantly. From Boa Vista, natural parks as Monte Roraima, Serra de Tepequem, Monte Taburaí, and the archeological site Pedra Pintada, with prehistoric paintings, may be visited. 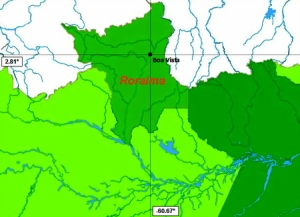 Boa Vista is the capital of the state of Roraima, the northernmost state in Brazil. The state is surrounded by neighboring states Pará and Amazonas in the south, and by neighboring countries Venezuela and Guyana. Boa Vista is the only Brazilian capital that is located above the equator line. Almost two thirds of the entire population of Roraima lives in the capital; In 2011, Boa Vista counted a bit more than 290 thousand inhabitants (IBGE). The size of Boa Vista is 5711 square km, the average altitude is 90 meters. The Human Development Index is 0779 (PNUD, 2000).

Boa Vista at the margin of the Rio Branco River

When gold was discovered on the American continent, the Portuguese Crown was interested to expand its territories in the continent, and to establish regional supremacy. The Portuguese dominance already had been threatened for centuries, by a number of invasions of Spaniards, English, Dutch and French. When the Portuguese started to implement their expansions, a Dutch named Nicolau Hostman had departed from the Dutch colony (now Suriname) and reached the Rio Branco and Rio Negro, in 1741. The Dutch had intensive transaction ties with the local indians on Portuguese territory. Not only the Dutch, but also the Spaniards invaded Portuguese territory, when departing from the Orinoco River, between 1771 and 1773. The had founded a number of settlements. 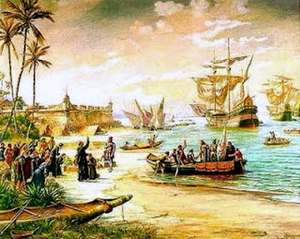 Rio Branco was discovered by Pedro Teixeira in 1639. But only in 1775, a fortress was constructed at 32 of the current location of Boa Vista: Forte São Joaquim, thereby marking the Portuguese presence in the region. The Portuguese started to occupy indian territory between 1775 and 1777; only a few years later, the indians left their villages, in disagreement with the conditions demanded by the Portuguese. Another attempt to colonize this region happened in 1790, but failed, thanks to a large-scale revolt of the indians, now known as the Revolta Praia de Sangue.

The Portuguese changed their strategy and now introduced cattle along the river margins. Fazendas were constructed. The first fazenda was Fazenda São Bento, followed by Fazenda São Marcos. A new settlement emerged, and was named Freguesia de Nossa Senhora do Carmo. In 1890, the settlement gained the status of a village, and was renamed into Boa Vista do Rio Branco. The Brazilian central government was not able to fund further development of the region of the Rio Branco valley, the village and the fortress became almost inhabited.

Migrants from the Northeast of Brazil arrived, fleeing the intense drought there, and trying to work in rubber plants. The revival of Boa Vista made the government decide to create a trail between Manaus and Boa Vista. A new flux of migrants populated the region, and with them missionaries had arrived; they participated in the development of the region.

During the Second World War, in 1943, The municipality of Rio Branco became a Brazilian Federal Territory, with the same name. In 1962, the name was changed into Roraima, in order to end the confusion with the city of Rio Branco, capital the Federal Territory of Acre. Between 1964 and 1985, when Brazil was ruled by military dictators, the territory gained attention, in order to fortify the border regions, and to integrate them nationally. The local infrastructure improved significantly then.

The discovery of gold in the Seventies ignited massive migration to Boa Vista. In only 20 years time, the population quadrupled from 50 thousand to 200 thousand. In 1988, Roraima became a Brazilian state, with Boa Vista as capital.

The economic activities in Boa Vista mainly consist of agricultural production, mining activities (gold and diamonds), and services. Agricultural products include rice (also for exports), beans, soya, cassava, and tropical fruits. Tourism, with the emphasis on eco-tourism, is emerging.

When arriving in Boa Vista by plane, the visitor may be amazed by the view of a modern and green city. Planned by civil engineer Darcy Aleixo Dereneusson, the wide avenues diverge to the center, Praça do Centro Cívico, resembling the center of Paris. Administrative buildings and the better restaurants and hotels are concentrated around this square. 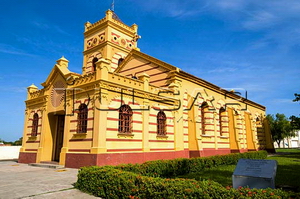 The historic center is located at the margins of Rio Branco, where the city emerged in 1830. In the center, the first church of the city is located, and next to it the site of the Fazenda, constructed by Inácio Lopes de Magelhães (1805-1875), which gave its name to the city. in 1725, the first chapel was founded by Carmelite priests. On the same site, the Igreja Matriz was constructed in 1892. The church underwent drastic reforms according to the German architecture style. The Porto das Laveiras (Washerwomen’s Gate) and the Depósito de Sal (Salt Depot) are also located in the center.

One of the landmarks is the Monumento aos Garimpeiros (Monument for the Gold and Diamond Seekers), at Praça Barreto Leite. For a great part, these seekers have contributed to the regional development. Another landmark is Portal do Milênio (Millennium Gate), at Praça das Águas. This square is an ideal location to spend the night in the bars and restaurants, or eat some hamburger with coke, like many young Brazilians do. The Monumento aos Pioneiros (Monument for the Pioneers, 1975) is dedicated to the pioneers who helped to develop the city and the region. The monument of armed concrete is 15 meters wide and is created by plastic artist Luiz Canará. There is a quote attached: “Iniciaram a construção de um sonho chamado Roraima” (They started to construct a dream that is called Roraima). A 1200 meter wide bridge spans the Rio Branco: the Ponte dos Macuxis, named after an indian tribe. 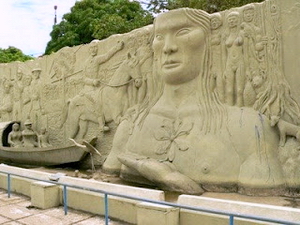 In the dry period (between October and March) the water level of the Rio Branco lowers significantly, and beautiful natural beaches appear along the margins. Praia Grande is located at 6 km from the city, and is about 15 km long. Praia da Água Boa is located at 15 km from the city. As its name already says, the water is very clean here. Other, less known, beaches (Caçari, Curupira, Polar and Cauamé) are surrounded by the typical Amazonian vegetation, and contain some bars and little restaurants. Most beaches may be easily reached by a rental boat. 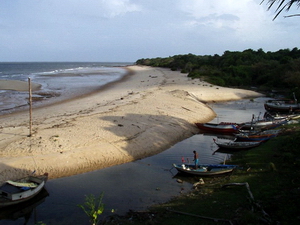 Outside Boa Vista, other locations worth visiting are:

The ruins of Forte São Joaquim, which was constructed in 1775. The fortress may be reached by boat, a trip of about three hours. Close to the fortress is Fazenda de São Marcos, one of the first large farms in the region.

Pedra Pintada, about 140 km north of Boa Vista. This granite rock of 40 meters high, and with a diameter of 60 meters, is located in the São Marcos Indian Reservation. This rock is very popular among tourists, scientists and archeologists. On two side and inside the cave, there are prehistoric paintings that are estimated to be a few thousand years old.

Tourists and mystics also gather around Mount Roraima, one of the planet’s oldest sites, and is the second highest point in Brazil: 2875 meters. The flat table-like top inspired British author Sir Conan Doyle to write ‘The Lost World’. To visit the mountain and the national park, one need to enter Venezuela (250 km from Boa Vista) for access.

About 80 km further, near the border with Guyana, Monte Caburái is another natural paradise. The park, at the northernmost point of Brazil, hosts a wide variety of flora and fauna, including one flower species that only can be located there: Clusia grandiflora that is larger than the size of a hand. The Garã Garã Waterfall of 200 meters is another natural jewel.

Serra de Tepequem is located at about 250 km from Boa Vista. The ecological site is rich in waterfalls and counts a large variety of fruits, roots and nuts. The Funil Waterfall is formed after a dynamite explosion caused by diamond seekers.

The largest folkloric festival in Boa Vista is Boa Vista Junina, the Festas Juninas (June Festivals). For nine days, the Civic Center hosts a miniature version of Boa Vista where legends, mysteries and folklore meet. A number of dance groups will compete with each other during these nights.

Roraima – nature to the extreme