Macapá, city on the equator line, is located near the mouth of the Amazon River. The foundation of the city started with the construction of fortress São José do Macapá, in 1740. Macapá may only be reached by boat or airplane, although there are various roads to neighboring cities. Its principal touristic attractions are the fortress and the Marco Zéro Monument. The Zerão Soccer Stadium is located exactly on the equator line, with the playing field both in northern and southern hemisphere. From Macapá, various national parks may be reached, such as Tumucumaque, the largest tropical forest park in the world.

Macapá is the capital of the state of Amapá, one of the states in the Northern Region of Brazil. The state shares borders with the state of Pará, and the neighboring countries Suriname and French Guyana, and is located at the Atlantic Ocean. The city is located on the equator, and measures 6407 square km. Macapá is located at the margin of the Amazon River; the average altitude is 14 m. According to estimates of the IBGE (2011), the city counts 407 thousand inhabitants. The Human Development Index is 0.772 (‘average’; PNUD 2000). 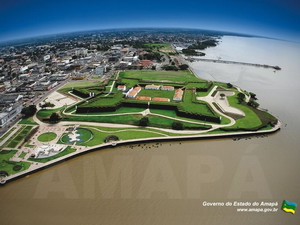 Aerial view of fortress and city

In 1499 – shortly before the discovery of Brazil by Pedro Álvares Cabral on April 21, 1500 – a Spanish expedition, commanded by Alonso de Hojeda, followed the shoreline and the margins of the Amazon River, near Macapá, as reported by Américo Vespúcio. In 1544, the Spanish claimed the location as Adelantado de Nueva Andalucía. Early 17th century, an English expedition force, commanded by Roger Fray, started to construct a small fortress with seven cannons: Forte Inglês de Cumaú, at about 15 km from Macapá. The Portuguese managed to attack the fortress and to kill Fray. A new fortress, Forte Português de Cumaú, was constructed, in 1658. Only thirty years later, another fortress was built on the same site: Forte de Santo Antônio de Macapá. 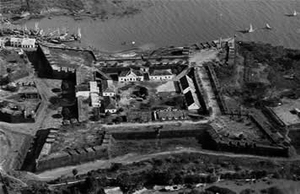 In 1697, French troops of the governor of Cayenne (French Guyana) attacked the fortress, in order to expel the Portuguese from the Amazon margins. In the same year, the Portuguese managed to reconquer the fortress. In 1738, the Governor and Captain-General of the province of Grão-Pará and Maranhão, João de Abreu Castelo Branco, reported to the Portuguese court the necessity of another rebuild of the fortress. This Reduto de Macapá was constructed in 1740. In 1761, it was replaced by Forte do Macapá, and in 1764 by Fortaleza de São José do Macapá, which was completed 18 years later.

The arrival of the Portuguese detachment in 1738 marked the start of the first settlement. Colonization was started, with the arrival of the first colonists from the Azores in 1751. One year later, the young population suffered a cholera epidemic. More colonists arrived from Portugal, mainly condemned, prostitutes, imprisoned politicians. On February 4, 1758, the pelourinho was erected, thereby marking the foundation of Vila de São José de Macapá, by governor Francisco Xavier de Mendonça Furtado (brother of the Marquis de Pombal), of Grão-Pará.

The first church was erected in 1761, Igreja Matriz São José de Macapá. In 1790, the village counted a little more than 2500 inhabitants. In 1853, a project was proposed to create the province of Oiapoque, as a dismemberment of Pará, and to make Macapá as its capital. On September 12, 1856, Macapá gained the status of a city. In 1943, when Federal Territories were created along the Brazilian borderline, the municipality of Amapá was converted in the Federal Territory of Amapá, of which Macapá became the capital. With the introduction of the new Brazilian constitution in 1988, Amapá became a Brazilian state, with Macapá as its capital. 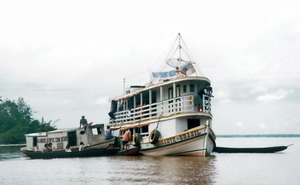 Macapá may be reached by boat (foto viajeaqui)

The local economical activities is mainly based upon commerce, and to mining, agriculture and industrial activities to a lesser extent. In 1991, a Free Trade Zone was created, thereby facilitating economic development. The city of Macapá can best be reached by boat or by airplane. The city has a bus station, with connections to other cities in Amapá, but does not have direct connections with other Brazilian capitals.

The above-mentioned Fortaleza de São José de Macapá (1764-1782) is located at the margin of the Amazon River. It was constructed by Indian and African slaves. The recently renovated fortress is open for visits. Igreja São José de Macapá (1761), the oldest church in the city, in neoclassical style.
Not to be missed is the Marco Zéro Complex. This complex consists of the Monumento do Marco Zéro de Equator (Monument of the Equator line), Soccer stadium Zerão (capacity 8000, with the middle of the soccer field exactly on the equator), the Ecola Sambódomo de Artes Populares, and Panela do Amapá.
Trapiche (Pier) Eliezer Levy was originally constructed during the Forties of the past century, and has undergone various reforms. The pier is 386 meters long, which can be traveled by an electric tram.
Macapá hosts a number of cultural centers, such as Centro da Cultura Negra (culture of the black people), Museu Sacaca (various regional people and their culture), Casa de Artesão (local handicraft), Teatro das Bacabeiras (theater).

Various legends exist about the Pedra do Guindaste. This rock is located at about 300 meters from the shoreline at Macapá. The original rock was destroyed after an accident with boats, Now a block of concrete is replacing his rock. On top of it is the statue of the patron saint: Saint Joseph, who is also the patron saint of the travelers.

At 12 km from Macapá is the Environmental Protection Area of the Curiaú River. Here lives a community of descendants of slaves, who have maintained their cultures and traditions. Here one may bathe in crystalline river water, while listening to the beats of traditional drums. Four kilometers further, is the Balneário da Fazendinha, where one may enjoy a beautiful scenery at the river beach.

At 4 km from the city is the Complexo do Araxá, at the margin of the Amazon River, where the water is muddy and the beach sand dark. The complex contains a number of bars, restaurants, and leisure facilities. Another touristic complex is Complexo Beira-Rio, where the fortress, the Pedra do Guindaste, and the Trapische are located, together with a number of typical restaurants and bars.
At 185 km from Macapá, at the mouth of the Amazon River, is an archipelago of eight small islands: Arquipelago do Bailique. About five thousand people live on the islands, integrated in the rich fluvial ecosystem, where the river meets the Atlantic Ocean.
The state of Amapá contains a number of national parks and reservations; in total, the area equals the size of Portugal. The largest national park is Tumucumaque, and is located in the northwest of Amapá and has the size that is equal to that of The Netherlands. It is considered as the world’s largest tropical forest park. (See for photos). 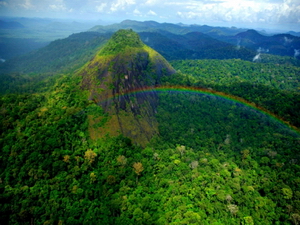 At 270 km from Macapá, in Laranjal do Jari, is the Cachoeira (waterfall) de Santo Antônio, one of the natural landmarks of the state of Amapá.

Macapá and its beauties