In 1500, the Spaniard Pinzón was the first European to set foot on Brazilian soil, most probably near Fortaleza. In 1649, the Dutch started the construction of a fortress; hence, the foundation of the city of Fortaleza. Fortaleza, nicknamed ‘Fortal’ or ‘Land of Light’, has evolved into an economic stronghold in the northeast of Brazil. The trendy beaches of Fortaleza are very popular and attract many Brazilian and international tourists. Now the fourth largest city in Brazil, Fortaleza will be one of the host cities during the FIFA World Cup in 2014.

Fortaleza is the capital of the state of Ceará. The state of Ceará is surrounded by the states of Rio Grande do Norte, Paraíba, Pernambuco, and Piauí, and by the Atlantic Ocean. Ceará is located on the slope of the Brazilian Highlands, gradually transforming in the coastal plain. The state has a varied environment: from tropical forests to the desert-like cerrado. The state covers an area of 147 square km, twice the size of Ireland, and counts about 8.5 million inhabitants (2010). The metropolitan area of Fortaleza counts about 3.4 million people within 3760 square km. The city of Fortaleza is the fifth largest in Brazil with over 2.4 million inhabitants within 313 square km (2010). The average altitude of the city area is 21 m. The name ‘Fortaleza’ is derived from a Dutch fortress, ‘Fort Schoonenborch’. Its construction was started in 1649.

About 150 million years ago, when Africa and Southern America were integrated in the super continent Gondwanaland, the actual location of Fortaleza was linked to Nigerian Lagos. The geological evolution created the immense dune landscapes in the northeast of Brazil. The region was inhabited by indians of the Potiguar tribes for centuries, when the first Europeans arrived in Ceará. However, it were not the Portuguese but the Spanish. A small fleet of four caravels led by Vicente Yáñez Pinzón – he also took part of the first Columbus expedition – landed near Mucuripe and baptized the newly discovered land Santa Maria de la Consolación (although still disputed, the alternative location might have been Cabo de Santo Agostinho in Pernambuco). More or less a month later, his cousin Diego Lepe also landed in Ceará. Because of the Tordesilhas Treaty of 1494 that divided the newly discovered world in a Spanish and a Portuguese part, the Spanish claim was lying in the Portuguese part and was never announced officially. 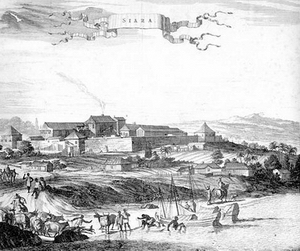 More than a century after the discovery of Brazil (1500) by the Portuguese Álvares Cabral, the Portuguese Pero Coelho de Souza started to construct a fortress: Fortim de São Tiago, in 1603. The nearby tiny settlement was named ‘Nova Lisboa’. Four years later, two priests, Francisco Pinto and Luís Figueira, also tried to colonize the region, without being successful. Nearby Maranhão was occupied by the French, and the Portuguese Martins Soares Moreno was sent to retake Maranhão. On January 20, 1612, he started the construction of another fortress, São Sebastião, which came under his command until he was called to join the expedition in Maranhão, in 1613. He only returned in 1621, and found his fortress in ruins. He reconstructed the fortress and started to plant sugar cane and to grow cattle. Ten years later. he was called to fight the Dutch in Pernambuco.

On October 26, 1637, the fortress was taken by the Dutch, by an expedition commanded by George Gartsman and Henderick Huss. The fortress came under the command of Van Hans, substituted by Gedion Morris. In 1644, the fortress was attacked and destroyed by revolting indians. Five years later, the Dutch returned, commanded by captain Matias Beck, and the construction of Fort Schoonenborch was started, on April 3, 1649. This date marked the birth of Fortaleza (fortress in Portuguese) A small settlement was located within the fortified walls of the fortress. In 1654, following the expulsion of the Dutch from Brazil, the fortress was renamed into Forte de Nossa Senhora da Assunção. With the help of the pacified indians, a small chapel was erected. The colonization of the region had started. 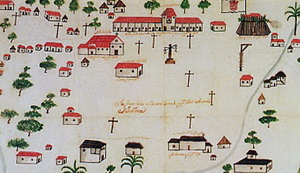 The setttlement became a vila, with the name Fortaleza, om February 13, 1699. In 1710, for one year, the village was renamed into São José do Ribamar do Aquiraz. On April 13, 1726, Fortaleza became an independent municipality, and was elevated to the status of a city on February 24, 1823. On March 17, 1823, the city was renamed into ‘Fortaleza de Nova Bragança’ for a short time. Within one year the original name ‘Fortaleza de Nossa Senhora de Assunção’ was adopted again. Fortaleza participated in various movements that occurred early nineteenth century. One fisherman, Francisco José de Nascimento, nicknamed ‘Dragão do Mar’ (sea dragon), became famous by blocking slave transport to his city, and turning Ceará the first state where slavery was abolished, in 1884.

The second half of the 19th century brought prosperity in Fortaleza. The demand for cotton increased during the American Civil War. The city gained a light tower, a hospital and a prison. The construction of railways established the city as an important regional center. The so-called Bella Época, that roughly lasted from 1870 to 1930, the city experienced remarkable social and cultural changes. The city became modernized, using Paris as an example. The streets were planned according the checkerboard pattern. The city received telephone, mailboxes, and a telegraph line with Europe. Soon after the turn of the century, the first cars and trams were seen in Fortaleza, and the city gained sanitation, parks, museums, and a cultural center.

In the second half of the past century, Fortaleza continued to grow, to become a economic stronghold in the northeast. At present, tourism is booming, attracting many Brazilian and foreign tourists to the beaches.

Fortaleza represents about half of the total economic activity in the state of Ceará. In the past decade, stable economic growth made Fortaleza, together with Salvador, the largest economic center in the northeast of Brazil. Most commercial activities are concentrated downtown. A number of large shopping centers attract numerous customers. The local industry mainly produces textiles, footwear, leather-derived articles, and extraction of minerals in Ceará. Fortaleza is an emerging center of conventions and business meetings. Tourism is booming, and may expand more at the time of the major soccer events: Federations Cup in 2013, and World Cup in 2014.

Fortaleza is one of the most popular Brazilian destinations. Tourists arrive to visit the historical center, to spend their days on the trendy beaches, and to meet the local culture.
The cradle of Fortaleza is a fortress. In 1649, the Dutch, commanded by Matias Beck, started to construct Fort Schoonenborch. The Dutch surrendered in 1654, the fortress was then renamed into Fortaleza de Nossa Senhora da Assunção. The construction of the actual fortress was started in 1812. At present, the fortress hosts a battalion of the Brazilian army. The fortress is open for visitors.

Not far from the fortress is one of the oldest squares of Fortaleza, the Praça dos Mártires, better known as Passeio Público. The square in neo-classical style was constructed in 1890. In 1910, a baobab was planted there. The location is now a site for various cultural events.

The center hosts some interesting historical buildings. Palacete Ceará (1914) is a good example of the eclectic architecture, and now hosts the Caixa bank. The white Igreja de Nossa Senhora do Carmo (1906) is now one of the two Matriz churches in the city. It took forty years to complete Catedral Metropolitana (1938-1978), which was built on the site of the former Igreja da Sé; the cathedral, in Gothic-Romantic style, has two towers of 75 meters, and has a capacity for 5000 worshipers. 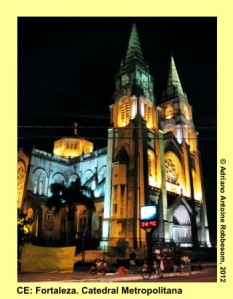 Opposite to the Cathedral is Mercado Central (1809), the central market. The actual building was inaugurated in 1997. Tourists may encounter a surprising variety of local food, drinks, clothes, souvenirs, and handicraft.
Beira-Mar is another location to find local dishes and artesanato, at the so-called Feirinha (little market), along the trendy Iracema Beach. From this beach, the Ponte dos Ingleses may be reached. Initially, this metal construction was designed as one quay of a new port. The port never came; the Ponte is now a touristic attraction with a number of bars and restaurants, including the famous Pirata Bar. An excellent location for witnessing a beautiful sunset.

One of the major cultural centers in Fortaleza is Dragão do Mar. The Center, inaugurated in 1999, contains a cultural memorial of Ceará, a contemporary arts museum, a planetarium, and a public library.
The center is surrounded by bars, restaurants, and theaters.
Another important theater is located in downtown: Theatro Jose Alencar (1910). The building is another example of eclectic architecture, the interior of the theater is of art nouveau style. Once a market building, but now a cultural center, is Mercado dos Pinhões (1897). The structure is of wrought iron, imported from France.
Palácio la Luz (end of 18th century), in neo-classical style, initially served as a residence. It then became the seat of the government of the state of Ceará. Since a few decades, it houses the Academy of Literature of Ceará. The Museum of Ceará, telling the history of the state, is located in the former Assembléia Provincial (1871).

Ecological Park Cocó is an urban state park in Fortaleza. Within this park of almost 12 hectares flows the little Cocó river. The margins are grown with mangrove trees. The park houses various trails, a cooper circuit, playgrounds, and facilities for athletes and children.

Fortaleza is famous for its beaches. Iracema Beach is located near the historic center. The already mentioned Beira Mar (with the Feirinha de Artesanato) and Ponte dos Ingleses (also called Ponte Metálica) are located there. Iracema is a trendy and bohemian beach with many bars, restaurants and night clubs. The beach is named after the famous novel of José de Alencar. Many hotels are flanking Meireles Beach, which is more suitable for walking and sportive activities. One may find many small boats (jangadas) of fishermen at Mucuripe Beach. Praia do Futuro is characterized by the presence of many barracks that house bars and restaurants. Beach Park is located at 16 km from Fortaleza. It is the largest water theme park in Southern America.

East of Fortaleza, the littoral area is called ‘Costa Sol Nascente‘ (Sunrise Coast). The best known beach in this area is Canoa Quebrada (Broken Canoe) that was first discovered by hippies and movie directors. Other known beaches are Majorlândia, Lagoa do Mato, Quixaba, Morro Branco, Redonda and Ponta Grossa.
West of Fortaleza, the littoral area is called ”Costa Sol Poente’ (Sunset Coast). The best known beaches in this area are Cumbuco and Jericoacoara. Jericoacoara, together with Canoa Quebrada, is considered as one of the most beautiful beach locations in Brazil. Other known beach locations are Caucaia, São Gonçalo, Paracuru, Paraipaba, Trairi, Cruz and Camocim.