Curitiba is a highly developed city in the south of Brazil. Its strategic location between the cities of Porto Alegre, São Paulo, and Belo Horizonte, and the border with neighboring country Paraguay ignited a significant influx of migrants to Curitiba. At present, about half of the city population was not born in Curitiba. Many touristic highlights in Curitiba refer to the countries of origin of the migrants. Curitiba was one of the World Cup host cities in 2014. 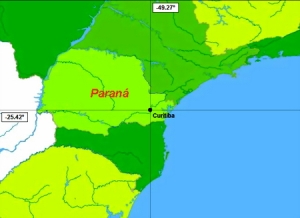 The city of Curitiba is the capital of the state of Paraná. The state of Praná is surrounded by the states of Mato Grosso do Sul, São Paulo, Santa Catarina, and the neighboring countries Argentina and Paraguay. Foz do Iguaçu, widely known for its beautiful waterfalls, is located in the tripoint of Brazil and the mentioned countries. The state of Paraná counts almost 200 thousand square km, twice the size of Portugal. The number of inhabitants is almost equal to that of Portugal: a little more than ten million. About one-third lives in the metropolitan area of Curitiba, more than 1.7 million reside within the city limits of Curitiba. In 1996 the Habitat II conference of the UN praised Curitiba as the “most innovative city in the world“.

The name of Curitiba refers to the presence of the typical pine trees. In Guarani language, ‘kur yt yba’ means ‘presence of many pine trees‘. The pine tree mainly found in Paraná is the Araucaria angustifolia, the Paraná or Brazilian pine, an evergreen pine tree that may reach 40 meters. A bird tightly associated with the pine trees is the gralha azul, the blue jay (Cyanocorax caeruleus). The now state symbol of Paraná appears in a local legend that the bird buries the pine seeds in the soil, where later new trees will grow. 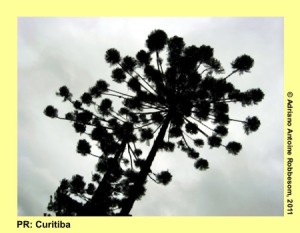 The settlement already was named on a map, that dates back to 1654. In 1668, a pelourinho (a pole at which slaves were punished) was erected, being a symbol of the recognition of a settlement. Officially, the city of Curitiba was founded on March 29, 1693, when captain Martins Martins Leme organized local elections for the newly-founded village bearing the name Vila de Nossa Senhora da Luz dos Pinhais, later renamed into Curitiba. At that time bandeirantes (initiallly hunters of indian slaves, later pioneers) passed this location on their journeys in the search for fresh slaves, and later for gold mines. The name of Curitiba appeared in 1721, when magistrate Raphael Pires Pardinho arrived in the village, and paid attention to environmental issues in the city. This tradition is maintained and now provides the capital with a worldwide reputation of its environmental matters. 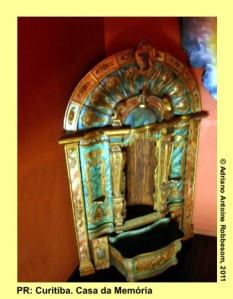 One of the altars of the first church in
Curitiba

Because of the location distant from São Paulo, Curitiba had been neglected for a long time and became impoverished. Starting from 1812, the city flourished again with the arrival of the so-called tropeiros, who accompanied large herds of cattle on their ways between the southern region and the states of Minas Gerais and São Paulo. The state of Paraná became separated from the powerful state of São Paulo in 1843, and Curtiba became its capital. Curitiba even became capital of Brazil for four days, between March 24 and 27, 1969, during the government of general Da Costa e Silva. The short transfer was a gesture to the loyalty of the city to the military dictatorship. 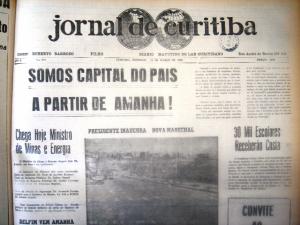 Curitiba has managed to control economic and urban expansion during the second half of the past decade. Only non-polluting industries were permitted inside its city limits and created a large industrial area that was integrated with significant green areas. At present, two-thirds of the economic activity is derived from services, and one-third from industrial activities. Curitiba hosts a number of multinationals, including car manufacturers and electronic industries. The city also has good facilities for information technology, and boasts to have a good infrastructure, with extensive and fast bus services. Therefore, the city attracts many investors from Brazil and abroad. About four percent of the economic activity comes from tourism: about two million tourists visit Curitiba annually. Curitiba is one of the host cities during the Word Cup Soccer in 2014. 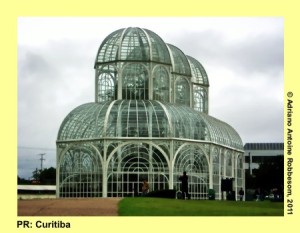 Copy of the London Chrystal Palace in the
Botanical Garden

Despite its relatively cold climate, Curitiba is worth visting. The city hosts various tourist information points, where one may obtain elaborate information about touristic activities in Curitiba. At day, a special tourist bus with large windows follows a 40 km long track throughout the city, with stops at 25 touristic locations. Tickets may be obtained at the tourist services. A day pass includes three tickets that may be used at different stops. One of the landmarks of Curitiba is the Botanical Garden, with a copy of London Chrystal Palace. Many touristic locations refer to various groups of migrants: The Ukrainian Monument, located in the Tinguï Park, with a copy of a wooden orthodox church, with an interesting collection of pêssankas (typical, decorated eggs); Bosque Alemão (German Woods) with replicas of a German church and the façade of a historic German house; Bosque do Papa, referring to Polish migrants; Bosque de Portugal, referring to Portuguese migrants; the Arab Monument, and the Mosque Imam Ali Ibn Abi Talib in the center; Fonte do Jerusalém, erected to honor Jerusalem’s 3000 years; Bosque Italiana, where one may find Italian ingredients and food and may enjoy shows.

The tourist bus also will stop at the Oscar Niemeyer Museum, at Barigüi Park where is also a automobile museum, the larger Tanguá Park with a colorful landscape and a waterfall, the Wire Theater (Ópera de Arame), the Paiol Theater, a former gunpowder storage facility. A panoramic tower offers a splendid view of Curitiba. 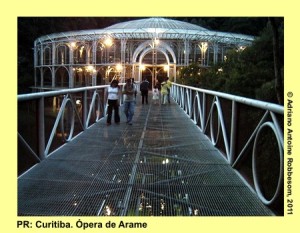 Also the center hosts an interesting number of tourist locations. The historic center exhibits the churches Catedral Basílica Menor, and Igreja da Ordem with the Museum of Religious Art, the Curitiba Cultural Center with temporary and permanent exhibitions, the Paraná museum, telling the interesting history of the state. On Sundays, the entire historic center is filled with stands full of handicrafts. 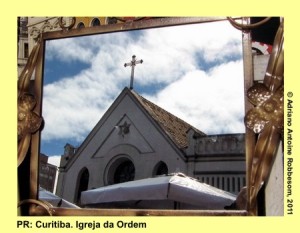 Church annex museum of religious art in the
historic center

One of the major touristic locations outside Curitiba is Ilha do Mel, at less than 100 km. This coastal island may be reached by ferries, and exhibits a wide range of (eco)touristic facilities. More distant is the border with Paraguay and Argentina, where the waterfalls of Foz do Iguaçu (Puerto Iguazu in Spanish) are located. It is worth visiting the Brazilian as well as the Argentinean borders of the park. In Foz do Iguaçu one may consider to visit the immense hydro-electric power plant Itaipu, located at the border between Brazil and Paraguay. At the other side of Foz do Iguaçu is the Paraguayan border city Ciudad del Este, known for its extensive micro-electronics trades in small shops and stands thoughout the center.
► More information about Foz do Iguaçu. 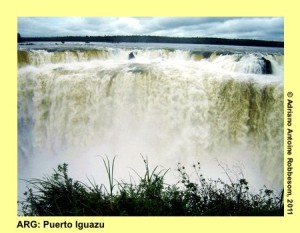