The Zoo in Belo Horizonte is located in the Pampulha District, at Lake Pampulha. The Zoo (Zoológico in Portuguese) was founded in 1959 and also hosts a large Botanical Garden (Jardim Botánico), which was opened for public in 2001. In 2008, when the Centenary of the Japanese Migration to Brazil was widely celebrated, the Japanese Garden was inaugurated. The Garden was an initiative of the Japanese Consul in Belo Horizonte (Rinaldo Campos Soares), the City of Belo Horizonte, and a Japanese-Brazilian cultural organization (Associação Mineira de Cultura Nipo-Brasileira). Landscape architect Haruho Ieda was responsible for the project, which was inspired upon traditional Japanese gardens: a pond with multi-colored koi fish, several Japanese trees (cherry tree, pine tree, bamboo), artificial waterfalls, a traditional tea house, Japanese lanterns and a typical Japanese bridge.

When I was on my way from Belo Horizonte to Diamantina by bus, I witnessed many beautiful landscapes and sceneries. Because of the long and dry winter season, that started in April, the vegetation had suffered a lot in August, the time of my travel. The hills and valleys were no longer lush green, but more brownish and yellowish green. The vegetation was very dry, vulnerable for wildfires. And indeed, I observed many spots of blackened grass, shrubs and trees, that were destroyed by those fires. Most of these fire were caused by careless motorists, for sure, by throwing their still burning cigarette butt out of the car window. You can imagine that living on a hill in the countryside of Minas Gerais must be absolutely wonderful. But on the other hand, owners of such country houses must be very worried when another wildfire may approach their house, about to destroy it. 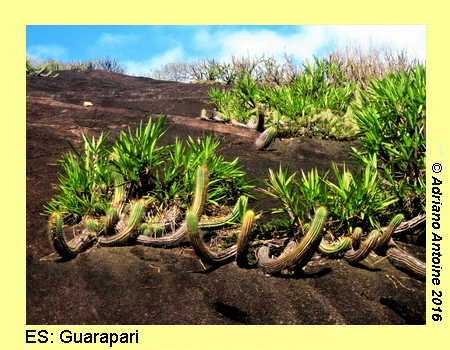 Guarapari is a popular beach resort in the state of Espirito Santo, at a distance of about fifty kilometers south of the capital Vitória. Especially among the mineiros (inhabitants of the neighboring state of Minas Gerais) Guarapari is very populair. Guarapari boasts some beautiful beaches, of which Praia dos Namorados and Praia do Morro are the most famous. Not far from Praia do Morro is a natural park, which is currently managed by the municipality. For a small fee, the visitor can follow a path of little more than one kilometer to a beach surrounded by natural vegetation, Praia do Ermitão. From this beach it is even possible to swim to Ilha da Raposa (‘Fox Island’). The park hosts original Atlantic Forest type and the so-called restinga type vegetations. The cactus plants on the photograph were located on one of the rocky slopes.

Minas Gerais state is one of the largest Brazilian states: its land area is similar to that of France and Switzerland combined. The state, with the centrally located capital of Belo Horizonte, is rich in mountains and rocks, which contain huge amounts of minerals. Iron ore, precious metals, precious stones and semi-precious stones are still extracted. The mining towns were very wealthy in the past, and it is still visible to the richly decorated houses and churches in these towns. When I was on my way to Diamantina, less than three hundred kilometers from Belo Horizonte, we drove along a fascinating mountain scenery, with rocks richly spread over the vast slopes and valleys. 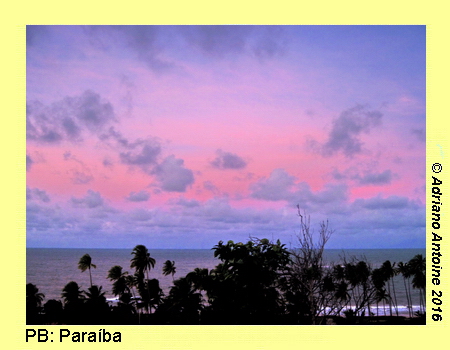 The beaches in the state of Paraíba are the easternmost located on the South American subcontinent. The Paraíba coastline measures 138 km; the beaches north of the capital João Pessoa belong to the northern beaches (‘litoral norte’), and the beaches south of the southern beaches (‘litoral sul’). The most famous beaches – including Praia dos Seixas, Tambaba, Tambaú, Coqueirinho – belong to the southern beaches. One of the most beautiful beaches is undoubtedly Praia do Coqueirinho. The beach, with calm seawater, is surrounded by palm trees. The colorful sand rock formations are suitable to beautiful compositions. However, the blue and purple colors of the sunset impressed me most.

When I was accompanying a group of students on their way to João Pessoa, a day was spent on the beach of Gunga in the state of Alagoas. Following my visits in 2008 and 2009, it was the third time I stayed at this  beach paradise. Just like the first time, the bus driver had to use all his experience and agility to guide the bus over the bumpy and paved secondary road. Most students immediately searched for the nearby beach pavilion and ordered a large amount of beer right away. This was not my intention, I preferred a long beach walk, with a camera in my hand. Late afternoon, we enjoyed a breathtaking sunset. 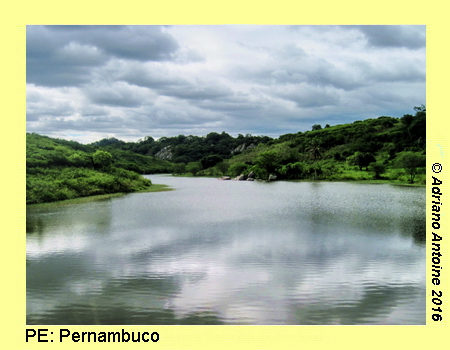 Pernambuco is a state in northeastern Brazil and is slightly larger than Portugal. As far as the population is concerned, the Brazilian state does not do much for Portugal. Pernambuco has a rich history and enormous cultural wealth. The Dutch ruled their colony from Pernambuco for a quarter of a century, after which the Portuguese settlers ruled Pernambuco again. The state also has a natural wealth, with savannahs, and some remains of the vast Atlantic jungle forest. When I was on my way to the neighboring state of Paraíba, we drove along this large lake. The still water seemed like a natural mirror, which showed a heavily cloudy sky.

Inside Brazil
Blog at WordPress.com.