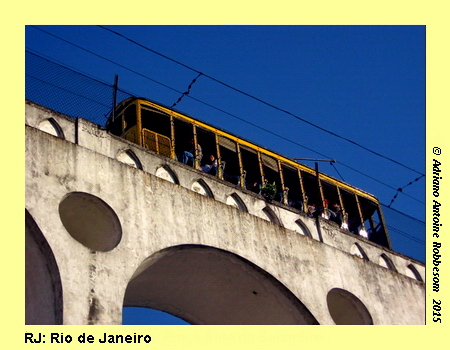 Lapa is a very popular location in Rio de Janeiro. Virtually every tourist is attracted by the diversity of nightlife in this district, which is part of downtown Rio. Lapa is also known for the huge arches of the aqueduct, which was constructed in the middle of the eighteenth century, in order to transport fresh water from the Carioca River to the city center. Late nineteenth century, the aqueduct got another function: now it served as a tram rail track, uphill to the equally popular Santa Teresa District. At the time I left the huge arches – the largest measuring more than seventeen meters high – behind me, the tram just rode on the former aqueduct.

Destination Rio de Janeiro, the third travel to the former capital of Brazil.
A ride by a historical tram to the historical neighborhood of Santa Tereza. 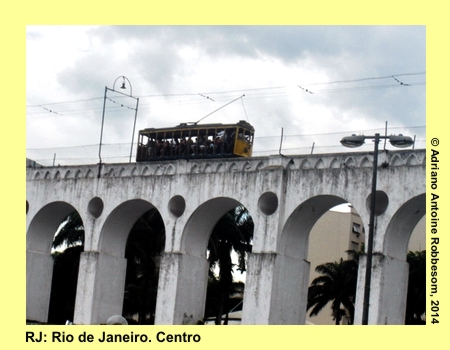 The tram riding on top of the Aqueduct Arcs of Lapa

We had spent some more time at the cultural center, where we participated in the biannual student event. Juliana recognized some friends, and they joined us. They proposed us to go to the tram station, to see if it was possible to take the tram to Santa Tereza. The tram track runs above the Arcs of Lapa Aqueduct. Quite funny for me, because I already was imagining how it would be to join such a tram ride, when I was here last December. We joined the very long queue, which covered the entire length of the platform. Every twenty minutes – more or less – a tram service arrived and departed some minutes later. We made slow progress in the queue. We were almost about to embark, but this time the next service appeared to have much delay. We already had waited for more than one hour. The tram ride would be worth waiting? 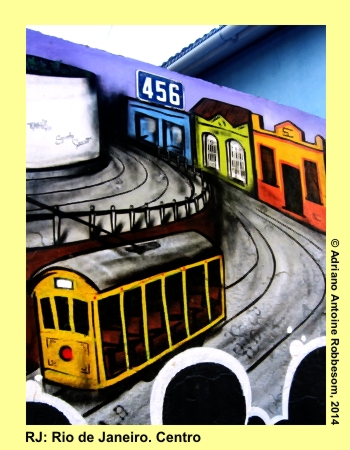 There was an announcement on the wall, which informed us that students with visible student outfit would travel for free. For adults, the tram fare was 80 centavos. We took our student cards. The employee wasn’t impressed at all, but gently explained us that only students in school outfit would travel for free. Students of primary and secondary schools. We had to pay. The tram was old, and contained space for the driver at both ends. The wooden passenger benches were located in between. Five passengers per bench, about forty passengers in total. We took our seats. I had my seat at the left side.

The bell sounded, it was time to go. The driver started the vehicle, the tram moved with some sudden movements. We were moving and shaking too. My first impression was that this tram ride strongly resembles those that you may make with historical trams in San Francisco, or in Porto. The humming of the engine, the ringing of the bell when the tram approached crossings and apparent dangerous situations. Juliana took some pictures. She promised me the copies. The tram didn’t make much speed. On the contrary. People with some basic physical training were able to run with the tram. Some passengers did the same. They ran next to the vehicle; when they had made sufficient speed, they grabbed a grip of the tram and lifted themselves on a tram beam. 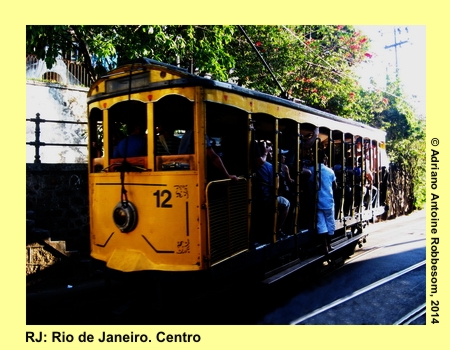 The tram in Santa Tereza

Most passengers who entered the riding tram, continued to hold the grips and stood on the beam. They didn’t need to pay the fare. Only seated passengers pay for their comfortable seats. The standing passengers didn’t need to worry about their luggage, because the seated passengers offered them to hold the bags on their laps. Some local kids also tried to keep themselves in balance on the beam, in order to travel a few stops further. One of them appeared to have troubles to keep his flip-flopped feet on the beam, and he had to run on the asphalt, from time to time, while holding the grip. This scene seemed so pathetic for this poor guy with his skinny legs. 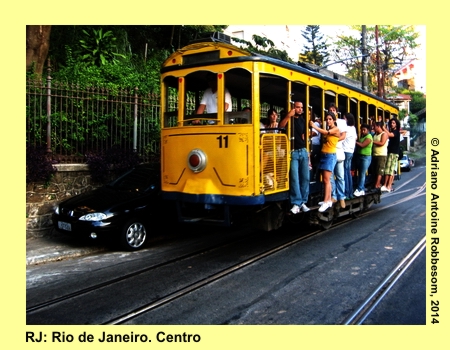 When hanging outside, you travel for free. But it is dangerous…

Appeared, since he was repeating this activity many times. Deliberately, he put his feet on the asphalt, ran for some meters, and returned to the beam. And he was not the only one doing this stupid trick. However, stupid or not, this trick might create a great sportsman of him. An athlete for the short distances, or for the steeple chase, or even for a marathon? Who knows… 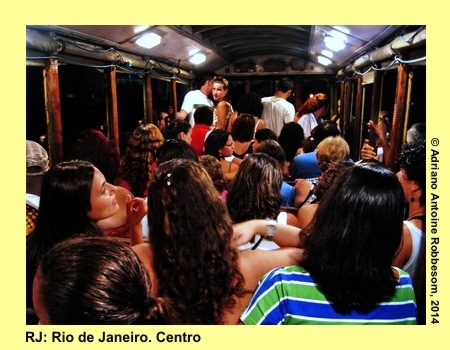 Inside the tram, at night..

The tram followed the meandering track uphill to the center of Santa Tereza. Form Santa Tereza, one might take another tram to Corcovado. But in this case, you need to pay much more. A tourist fare. Because they are very aware than (foreign) tourists afford these high fares. As a result, Brazilians need to find cheaper alternatives to visit Cristo Redentor (Christ the Redeemer). At that moment, I hadn’t found a cheap alternative..