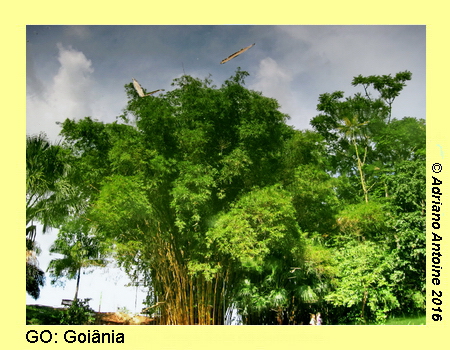 Bosque dos Buritis is the oldest park in Goiania, capital of the state of Goiás. The thirteen-hectare park was included in the original city plan; the city was inaugurated in 1938. Over the years the park has undergone several changes over the detriment of the original vegetation, which now accounts for only ten percent of the total vegetation. In the park you can walk the Cooper Test, encounter various parrots, and enjoy the reflections on the surface of the existing ponds. These ponds are connected to each other via small waterfalls. The dense vegetation creates special water effects, as seen in the photo. 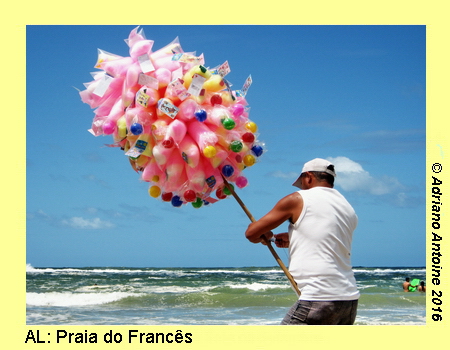 You see them often on the Brazilian beaches: hawkers. With a wide array of merchandise. They tirelessly scour the beaches looking for buying-eager beachgoers. Sometimes it can be quite annoying when you are trying to relax on the beach, a beach hawker loudly proclaims his merchandise. Besides, their shuffling over the loose sand is not always appreciated. On the other hand, such a beach hawker may be very useful in case you’ve forgotten something, like sunburn cream. Or when you are in desire of some snack or drink, such as a cocktail, a can of chilled beer, or a shrimp skewer. Or, as the picture shows: cotton candy. This beach hawker was active on the Praia do Francês – not far from the city of Maceió – in the state of Alagoas. 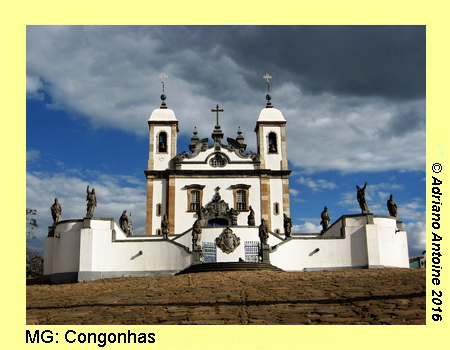 Minas Gerais host some very interesting historic towns: Ouro Preto, Mariana, Diamantina, Tiradentes, Sabara, Sao Joao del Rei and Congonhas. Congonhas, located on the historic route “Estrada Real” between Diamantina and Rio de Janeiro, famous for the sanctuary (Basilica) of Bom Jesus de Matosinhos, the statues of twelve prophets, and six chapels with seven performances of the Cross. The sanctuary included in The UNESCO World Heritage List. The prophets – Isaiah, Jeremiah, Baruch, Ezekiel, Daniel, Hosea, Joel, Obadiah, Amos, Jonah, Nahum and Habakkuk – and the Cross were carved in Baroque style by master sculptor Aleijadinho. The soapstone statues of the prophets are quite affected through the test of time; how would these statues have looked like at the beginning of the eighteenth century, when they just had been carved? 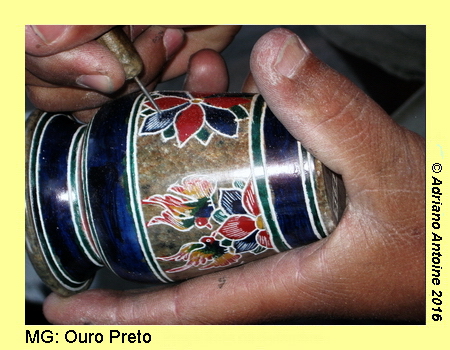 Soapstone is extracted in large quantities in the state of Minas Gerais. Ouro Preto, former capital of the state, is nationally known for the extraction and processing of soapstone. This rock, also known as steatite, is mainly composed of talc and its color is white to gray or green, depending on the degree of iron contamination. Because of its soft texture, soapstone is ultimately suitable for sculpting and carving. For example, the famous Twelve Prophets of Aleijadinho in Congonhas are carved from soapstone, and  Cristo Redentor in Rio de Janeiro has a soapstone outer layer. In the center of the historic city of Ouro Preto, the local soapstone market is easy to find. Several independent sculptors offer their creations there. The patterns and designs may look the same, but a few managed to create unique images. The soapstone sculptors and carvers do the finishing touch at the market, as shown in the photo. 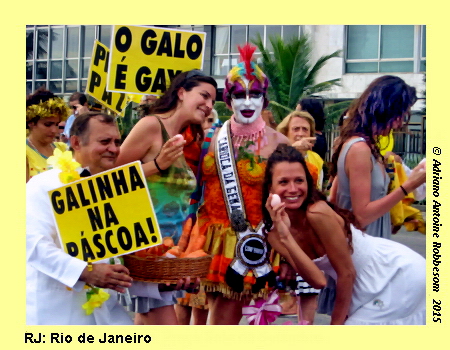 It was just over a month since the carnival was held in Rio de Janeiro. The biggest party on Earth, as boasted by the Carioca’s (residents of Rio), had attracted many carnival revelers, and tourists from home and abroad. You would think that it would be quieter afterwards in the city, at least for some months. On the contrary. As seen in the picture, I witnessed a small show of a so-called bloco de carnaval, a carnival group. Back then it was Easter, this bloco used this theme in their call for attention to more tolerance and less violence and prejudice. The motley crew drew a lot of attention, especially from curious tourists, and I was one of them. 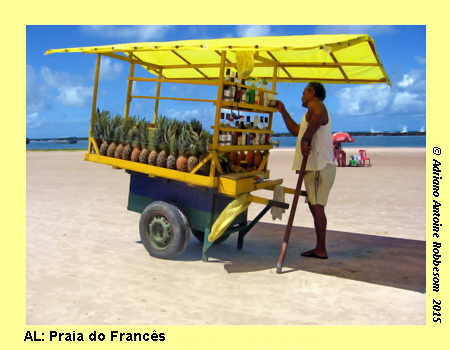 You can enter any Brazilian beach and you certainly will meet them: ambulant hawkers. These vendors evoke mixed feelings among the beachgoers, but they are usually respected and even appreciated. A small minority among the beachgoers consider them as intrusive and annoying, especially when they loudly shouting offer their wares as they shuffle through the loose sand. But in general, the vendors are appreciated, mainly because of the convenience: the beachgoers need not to leave their chairs or towels for a snack, a cheap souvenir object or a tube of sunscreen. Especially sellers of simple snacks and (alcoholic) drinks do good business. But it is certainly not an easy life, as seen in the photo. This vendor of tropical cocktails waits patiently for his clients, while he is using a homemade crutch to support his healthy leg. Hats off to this man ….

198. Children along the highway 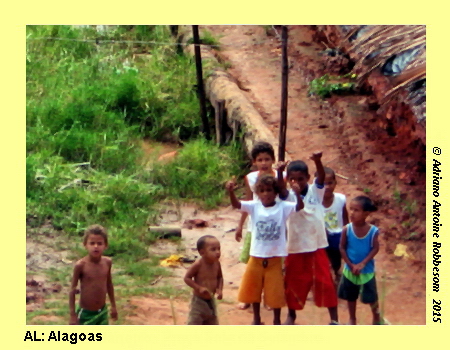 JULY 2008: Children along the highway

It’s no secret that there is much poverty in the large northeastern region of Brazil. There have recently been intense attempts by the federal government to eradicate absolute poverty of the regional population, with visible results. Nonetheless, poverty is still clearly visible there, even to the eyes of tourists and travelers who use the highways. At some locations, houses and huts have been built not far from the highway, and the local people seem to be undisturbed about the speeding fast traffic. A few people try to take advantage of the raised bumps at the city limits, and then try to sell vegetables, fruit, sweets or handicraft to drivers and passengers. Children also seem to have grown up with life along the highway. These children enthusiastically waved to us when our bus passed by their little house. 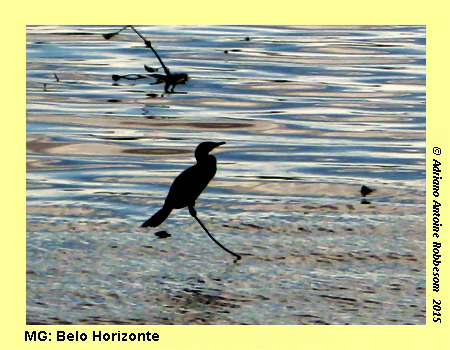 Pampulha Lake in Belo Horizonte attracts many day trippers and tourists who enjoy the natural beauty, the scenic beauty, or make a leisurely walk or bike ride. Especially on weekends many townspeople arrive at the lake for their leisure activities. And indeed, there is much to see and enjoy about this little piece of nature in the metropolis. Even though the lake suffers pollution because of wastewater and sewage, which are discharged into it, the lake is a favorite spot for many fish-eating birds. Likewise for the black cormorant, which reside at the lake in large numbers. It is not uncommon to see them hunting for fish, when they disappear completely under water for a few seconds. In the picture the feet of the cormorant seem to be missing, or might be fused with the twig protruding above the water. 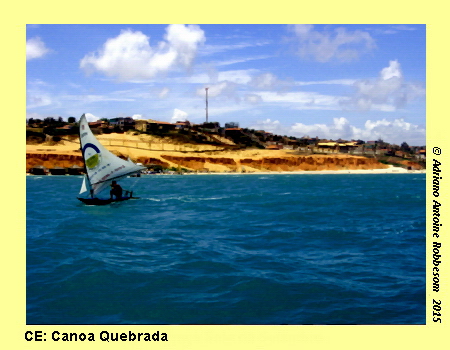 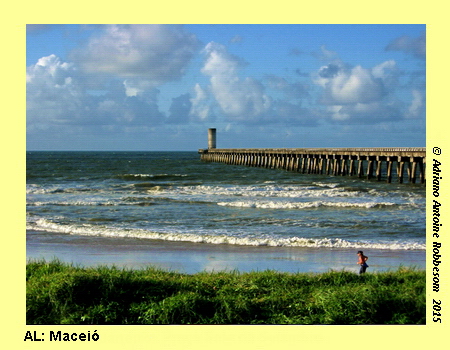 In January, when I traveled from Belo Horizonte to Fortaleza by bus (via Porto de Galinhas, Pipa and Canoa Quebrada), the bus ride along the coastline of Maceio, capital of the state of Alagoas. We were then almost at our destination that day, Porto de Galinhas. When we drove along the coastline, my observing eyes had already caught the long pier. Six months later, when Maceió was our final destination, the bus came again along the pier. This time it took less than an hour, before the bus arrived on our destination, the university campus. That morning the Atlantic Ocean looked pretty calm and the beach was very quiet. A lone jogger made his morning run.