Travel in Brazil: MARANHÃO (34). Sail from São Luís to Alcântara

Destination São Luís, capital of the state of Maranhão.
Sail by catamaran from São Luís to the Alcântara peninsula.

A very busy Saturday that was ended with street reggae until dawn, was followed by a very short night rest. At nine in the morning, we lacked time to have our breakfast, because we had to get on board of the catamaran, which was scheduled at nine-thirty… 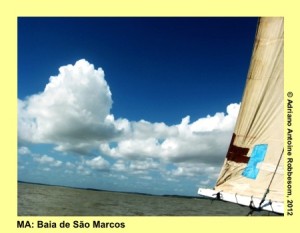 Alcântara is a peninsula northwest of São Luís Island, separated by Baia de São Marcos.
In the 17th century, when the French set foot on the peninsula, they met Indians of the Tupi tribe. The French were then expelled by the Portuguese; the conquerors massacred the Indians. The peninsula also served as a Portuguese base for their attacks against the Dutch invaders. The colonists founded a settlement, which became a small town (São Antônio de Alcântara, 1648) with town hall and church. Sugar cane plantations dominated local economic activity in Alcântara. In 1799, the town was hit by smallpox and cholera epidemics. Tens of thousands of slaves were transported to the peninsula, in order to replace the perished. Besides sugar cane, cotton was grown, which made the local people prosperous. Due to confluence of adverse economic conditions, the town gradually became abandoned at the end of the 19th century. Former slaves occupied the abandoned farms, the houses were demolished for the construction for their houses. In 1948,  Santo Antônio de Alcântara was declared as national historical-cultural monument by IPHAN.

In order to reach Alcântara, the 53 km distance should be crossed, on the waters of Baia de São Marcos. Since this bay has a direct connection with the Atlantic Ocean, the crossing is strongly dependent upon the tides. Therefore, boast depart early in the morning, and return late in the afternoon. Beforehand, we had informed about the fare and departure times. The cheapest crossing was by catamaran, for only 10 reais (4 euros). As described above, we literally had to run in order to be on time for the departure of the catamaran. We took our seats on the catamaran, we put on our life jackets. I already had put sunburn cream on my bare skin; very essential when you are on the water in the tropics. I counted ten passengers and four crew members.

Descending with a ladder…

I wasn’t the only foreigner, there were also some French tourists. For me it was quite obvious to observe some French tourists in São Luís. Maybe because of the French chapter in the local history? My travel companion was very talkative who easily made new contacts. We met a Brazilian scientist, who was about to spend her day off in Alcântara. She asked us if she could accompany us. We didn’t object. For Europeans, her request might sound somewhat strange, but you might receive such requests from Brazilians who travel alone. They then are accepted in a larger group. Why not, it is always interesting to meet new friends. 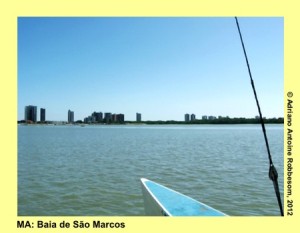 We quickly left the city of São Luís behind us. Less than fifteen minutes later, the city skyline was no more than a thin black line on the horizon. The water was brownish, thanks to the mud in the bay. There was a slight breeze, the crew tried to take advantage of this breeze. We regularly had to move from our seats to allow them to turn the sail. The sail was very relaxing, as a kind of remedy for the tiresome and intensive Saturday and the ultrashort night rest. Suddenly, a crew member drew our attention. A short cry, followed by a stretched arm. His arm pointed to some movements in the water. Sharks?? No! Innocent dolphins, who frolicked and leaped out of the water. Their dalliance drew all our attention, but no one managed to take pictures of them, They were too quick for us, and their movements were too unpredictable.

We would return to São Luís by the boat on the
background.

Sometimes we met some higher waves

Fortunately, we had taken something from the breakfast table that morning. We were also lucky to have bottled water with us. A sail made us hungry and thirsty. However, you need to have a strong stomach for this sail. One of the passengers demonstrated that. He became nauseated, and he made the mistake to stare on the water and on the horizon. I drew his attention and advised him to stare in the blue sky and keep staring. This easy trick seemed to have effect: his balance organs no longer aimed at the horizon or at any pixed point, but were fixed at an infinite point. He managed to avoid throwing up. 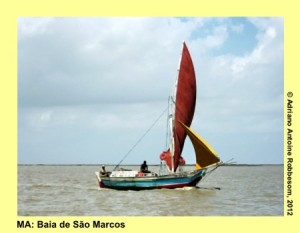 We weren’t the only ones on the bay.

The sail took more than two hours, before we arrived at the quay in Alcântara. We noticed some bright red dots, that appeared to be rooting in the mud of a reclaimed sandbank. Red ibises. They indeed are beautiful birds, with their bright red feathers and  curved beak. Unfortunately, they were too far from us to obtain sharp pictures of them. Despite the relaxed sail, everyone was clearly delighted to step on land again. We climbed out of the catamaran and walked via another catamaran and ferry boat to the quay. We now were ready for our discovery of the Brazilian Open Air Museum of Santo Antônio de Alcântara… 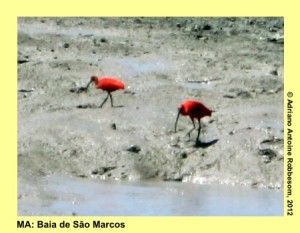 It was a rainy day at Porto de Galinhas, yesterday. We eagerly hoped for at least a day without rain. On our way to Pipa Beach, we had some rain. Since then, we had no rain. There were some dark clouds, but we also could enjoy some sun. During those sunny moment, the beach appeared to be subject to a complete metamorphosis. The beach did not look grayish, but turned into an eyesoring (yellowish) white. The ocean water gained the bright azure blue color. Our group had settled themselves on the beach, where they would sit down and have their drinks. Some girls spread their cangas and lied down to gain a bronze tan. the guys preferred plastic chairs under a giant umbrella. The local barman arrived quickly, and placed a plastic table. Only minutes later, he appeared again, with bottles of ice-cold beer and small glasses.

The shuttle boat, at low tide

(Foreign) tourist at such popular beaches are willing targets to a large number of locals who want to make good profits. But in an easy-going way. Many ambulant vendors wander on the beach, all day long, with their merchandise. Fishermen and small entrepreneurs rent their boats for short trips on the water. Some of them offer boat trips to the lagoon, where dolphins may be observed. In order to convince skeptical tourists, they even offer a see-dolphin guarantee. When there are no dolphins to be observed, you will get back the fee of that boat trip, worth 20 reais (8 euros). Like a Dutch saying: First see, then believe…

Safety vests on the beach…

Guarantee or not, we wanted to do this boat trip. We were offered safety vests. The crew then watched carefully whether we had tied them on in the right way. A small, flat boat carried us to a larger boat, and we went on board. The center of the deck was covered with a piece of canvas, where sun lovers were allowed to lie down. I did not join them, I preferred to walk around and take some photographs. My friends asked me to take some pictures of them, too. 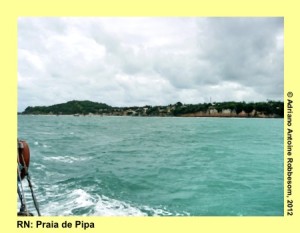 On the way to the dolphin’s lagoon
Dolphin fins

It took about twenty minutes before the boat arrived in the lagoon, where dolphins were supposed to swim around. We all were somewhat skeptical about that, but soon we lost that skepticism when the first dolphin fins were observed. I was lucky to observe them too. However, other friends were not able to observe them, and son complained about that. We waited patiently for more opportunities to see the fins. They came, but they were also very fast and unpredictable. Impossible to record them or photograph them! I did not manage to photograph a single dolphin fin! Within ten minutes, I had observed the dolphins about twenty times. One good friend of mine did not see them at all. She complained with the skipper. He waved away her protest with a faint smile. She was one of the few  unfortunates who did not see the dolphins..

There was opportunity to jump in the water and float around the anchored boat. The majority of our group did not resist to float in the refreshingly azure blue ocean water. The orange safety vests kept them floating. Again, I took pictures of them, floating around. I did not join them. When everyone was on board again, the boat made a big u-turn before heading for the beach. A small group left the boat, and were carried by a smaller, flat boat to the beach. Others, me included, continued the boat trip for another thirty minutes. The boat brought us in front of the other side of Pipa Beach and then returned to the beach. The entire trip lasted more than ninety minutes. We were satisfied, we had seen the dolphins! For me it was the second time to observe dolphins in Brazil: six months earlier, I had seen them during another boat trip, from São Luís to the peninsula of Alcântara… 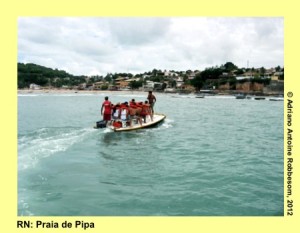 Some of us left the boat early…

We enjoyed some more time on the boat

We noticed the dolphin fins here…

Back to the beach….

Other tourists had more luck…