Experiences of a Dutchman living in Belo Horizonte, since December 2004, from month to month.
April 2007, part three: A visit to the center of the capital of the state of Santa Catarina, on a quiet Sunday.

The central market is deserted on
Sunday morning.

Sunday morning, seven am. Vítor and I got up, there was no time to lose. We quickly refreshed ourselves and left the dormitory. Everyone was sound asleep, still recovering from the long bus travel and the first party night. It was chilly outside, low clouds covered the hilltops in front of us. We decided to follow the same route, which we had taken the night before. Vítor already had asked around how we best could reach the historical center of Floripa. Local students had indicated him to go to the bus terminal not far from the hyper shopping mall. We took our time, we took our breakfast at a local snack bar. It was about nine am, when we reached the bus terminal. 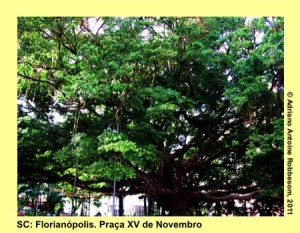 Vitor asked the cobrador (bus employee responsible for the bus fares), we we best could get off. His advise was to get out at the central market. The bus followed wide avenues that were flanked by tall buildings. For a short while, I was imagining not to be in Brazil, but in any modern American city. About ten minutes later, we had reached the central market. The market was closed, its square was completely deserted. Remember, it was Sunday morning. We took some time to walk around the bright yellow building complex. We visited a church, and wandered through empty streets. We were interested to visit a local museum, Cruz e Souza. However, the museum only opens at ten am. We entered a local McDonald’s and ordered a snack and a coffee. Soon, it became very clear to us that the employees need elaborate training sessions in order to make good coffee and fresh snacks.

The historical museum, named after a
famous poet from Florianópolis.

We entered the small park at Praça XV de Novembro in, where an age-old fig tree dominates the square. The heavy branches were leaning on iron supports. We then returned to the museum, where we learned a lot about the local history. We were amazed to see the antique furniture in a large number of rooms. We could imagine ourselves back in the Brazilian colonial era, dominated by the Portuguese. We further explored the historical center and wandered through deserted shopping streets. Our next goal was Igreja Matriz, the church at the other side of the park of the old fig tree. This church was already open, we entered the church and saw it from the inside. Few churchgoers sat there for their personal prayers. Our attention was drawn to a  homeless man sitting at the entrance. We gave him some coins, which he gratefully accepted, thereby showing a broad smile on his dirty, weathered face. Obrigado! Thank you very much! 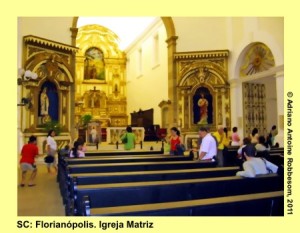 People arrive for their personal prayers.

Vitor was in fact the guide for me, even when he had no clear idea where all sightseeings were located. But he had the advantage to ask for the directions, since my Portuguese was still terrible at that time. We arrived at a weird-looking monument, which was representing the former quay, which was eventually filled up. It was the monument of Ribamar, locally known as ‘Atlantis’. A little further away, we encountered a small, octagonal building. To our big surprise, it was a museum. A sanitary museum. We tried to open the door. No movement, it was locked. No wonder, we initially thought, it was Sunday. However, when searching for more details on the Internet, I found out that this museum never opens. Really weird!

We continued our walk and left the center, in the direction of  Santa Casa de Misercórdia, a hospital. We found another monument, made of mosaics, about the legend of Santa Catarina, to whom the state was named. We made a long route, along the sambódromo – the location where the carnival parades are held in Floripa -, and the Convention Center. We followed the margin of the island, on the way to the antique ‘Hercílio Luz’ bridge, which is found on almost every Florianópolis postcard. Not far from that bridge was a monument of the founder of the city – at that time it was called Desterro -, Francisco Dias Velho. We walked under this wooden bridge, which now is out of service. There is another, modern bridge at some distance, on which traffic occurs between Santa Catarina Island and the Brazilian mainland.

The wooden bridge. which connects Santa Catarina
Island with the Brazilian mainland.

There was a fortress at the base of the wooden bridge. Forte Santana, an acronym for Santa and Ana, Holy Anna. The fortress is part of an elaborate fortress complex which was constructed to defend the island against hostile invasions. Nevertheless, Spanish invaders managed, late 18th century, to occupy the island for a short time. The fortress was free to visit, there were beautiful views of the mainland and of the bridge. The six cannons are still at their original positions, apparently ready to fire. The main building was a weapon museum of the local military police. The museum hosted an interesting collection of handguns, cannons, howitzers and even a hotchkiss. It was already one o’clock, when we left the museum. It was about time for our lunch. In the afternoon, we would visit another fortress, on the northernmost location of the Island of Magic, near Jurerê. 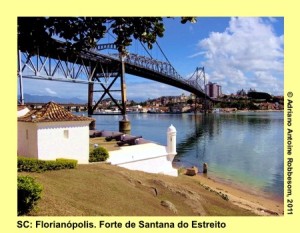 Fortress Santana, with the cannons aimed
at the mainland.

Destination Florianópolis, capital of  the state of Santa Catarina.
A fig tree of more than 140 years, at the center of Praça XV de Novembro 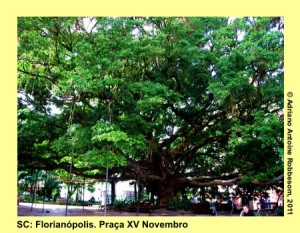 There is a big, green square opposite to Palácio Cruz e Souza, on the other side of the avenue. It is called Praça XV de Novembro. XV de Novembro (November 15) recalls the day of the proclamation of the Republic of Brazil, in 1889. A fig tree on that square was a witness of that important historical fact. An enormous fig tree, with branches that span a great part of that square. A plaque tells us that in the Brazilian summer (February) of 1891, this tree had been removed from a garden (Jardim do Matriz), and was planted on that square. It was estimated that this tree had the age of twenty years. The now majestic fig (the centenária Figueira) is about 140 years old; its branches need support from entrenched pipes and brackets. Fiances and fortune seekers follow the tradition to walk a few rounds around this fig tree, in the hope of a fruitful marriage or a fortune. It is almost certain that no one in Florianópolis will even get the idea to act against the witness of an important day in Brazilian history. Really no one would ever think of chopping this fig tree.

The plaque telling the history of the fig tree. 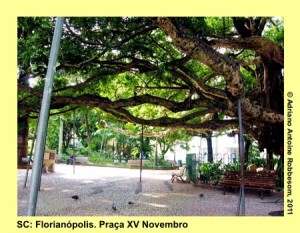 The mighty branches of the fig tree are
supported by iron tubes.

Mosaics of cobble stones, and benches
under the fig tree.

Closer look at the tree

The mosaics consist of 42 figures.

Playing chess under the fig tree.

A plaque demonstrating the
mosaics made by Hassis

Monument of the Paraguayan War

In 1662, bandeirante (pioneer) Francisco Dias Velho founded the Vila Nossa Senhora de Desterro. Desterro is the historical name for Florianópolis. The current name is due to the Floriano Peixoto, the second president of Brazil (1891-1894). The square is paved with cobble stones, which are decorated with motifs from the local folklore, as designed in 1962 by the artist Hassis (Hiedy de Assis Corrêa, 1926). The square has several monuments: A bust of the poet João Cruz e Souza, and a monument to commemorate the Paraguayan War. The fig tree is not the only tree on the square. There are many trees, collected from the five continents. The square is surrounded by historic buildings in the colonial, baroque and neoclassical styles. Across the square, ninety degrees from the Palácio Cruz e Souza, is a cathedral, the Matriz de Florianópolis. Let’s have a look there…