(Click here for the complete overview of ‘A Foreigner in Brazil 2006′)
.

Our day at Olivença Beach, a few hours south of Salvador, was a big success. The bus travel to Salvador happened during the night. The bus drivers lost the direction in the center of Salvador, and we arrived at the Federal University of Bahia (UFBA) at 4 AM. We observed and evaluated the space that was assigned to us, an empty college room. For us, this location was not suitable to spend an entire week; we preferred an alternative, a more comfortable pousada in the district of Barra, close to Barra Beach. A Mexican owned this pousada, he welcomed our mornings with loud U2 music. Unforgettable mornings! We spent our first days in the district of Barra, visiting the beaches of Farol da Barra, and Porto da Barra,which is considered as Ipanema of Salvador. On sunny days, one will notice that the entire beach is covered by a very colorful patchwork of cangas, Brazilian beach towels. We also visited Itapuã Beach; that day became an unforgettable day for us. A real relaxing day, a number of long-time friendships were initiated that day. We also enjoyed very much the boat trip to Itaparica Island, which is located in Baia de Todos os Santos, All Saint’s Bay. Unfortunately, that day was very cloudy with some drizzle. Another beach that was visited by us, was Stella Maris (‘starfish’). We were amazed by the beautiful scenery of the palm trees, the brownish red sand, and clear blue seawater. I gained my reputation as photographer at these days: initially, the travel companions were a bit suspicious about my habit of taking many pictures, but soon I was asked regularly to take pictures of them. Because, in general, Brazilians love to take pictures, and to pose for pictures. 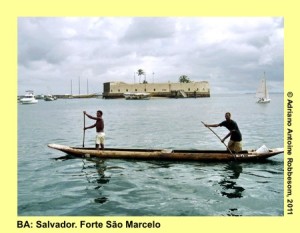 Fishermen passing by, when were were
on the way to Itaparica Island. 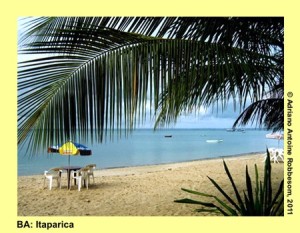 A beach on Itaparica Island

A sea urchin at a beach on Itaparica Island 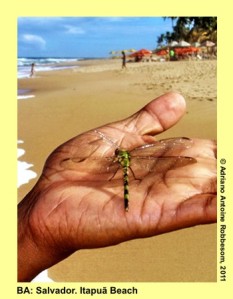 A dragonfly on Stella Maris Beach 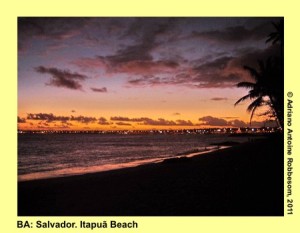